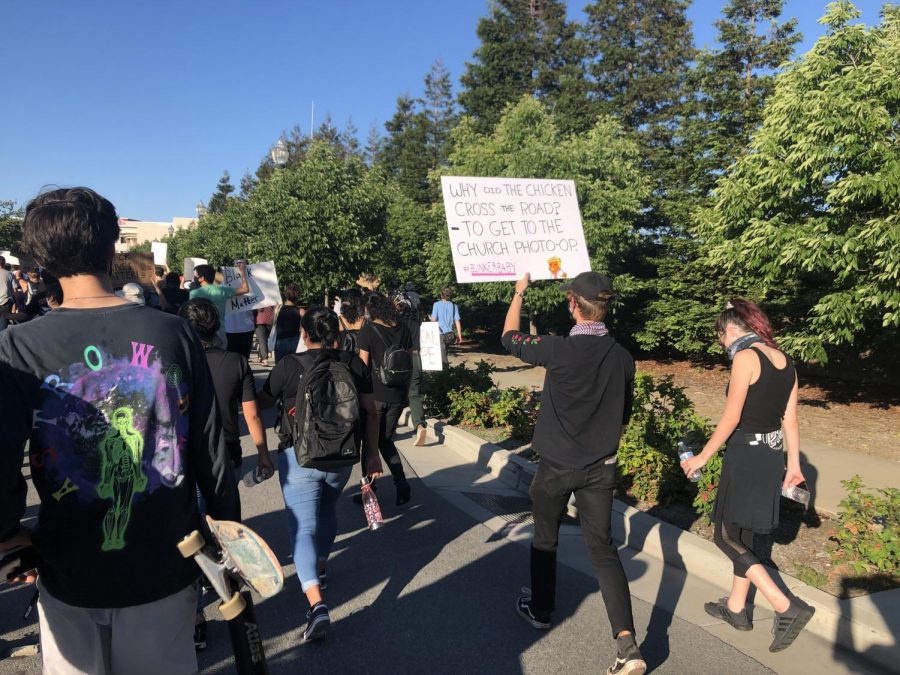 A new generation is entering the political sphere – Generation Z.

In the 2020 election, Gen Z has made its mark. According to Simon Rosenberg, president of the New Democrat Network (NDN), a progressive think tank and advocacy organization, 53-55% percent of those 18-29 voted. According to the NDN, this percentage might be the “highest ever recorded in the modern era of politics.” Ultimately that group of voters made up 17% of the electorate and voted 60-36% in favor of Joe Biden, according to exit polling conducted by Edison Research.

This activism doesn’t just end at the ballot box. Gen Z citizens, including those who can not yet vote, fight to help create a more just and equitable society.

On campus, Mira Wakefield, a junior at Carlmont High School, is the vice president of Junior State of America (JSA). This non-partisan civic discussion club allows students to come together and discuss contemporary political issues.

Off campus, Wakefield has been getting more connected with local politics. “I’ve been trying to go on the local level. I’ve been trying to engage in my community in terms of understanding how the greater sociopolitical issues and happenings related to the people around me and myself here in my community and our local government. And, you know, for me, that means being really engaged with Youth Advisory Committee,” Wakefield said.

Wakefield is currently focused on the police policy in the city of Belmont; she attends many of the city council subcommittees on community policing’s meetings and “engag[es] with the city council members who head that committee.”

Alongside working within the political system, Wakefield is taking her activism to the grassroots, working with a Belmont based group called Neighbors Against Racism, which is currently pushing for a community task force on public safety.

As part of her commitment to fighting police brutality, Wakefield has attended rallies and protests, but the pandemic has made activists like herself switch to different forums.

“Because we haven’t been able to flatten the curve in California, a lot of stuff does happen online. Online events might take the place of what would normally be a rally or a community meeting,” Wakefield said.

However, activism shifting to an online forum doesn’t faze Gen Z. In fact, Gen Z is the generation most suited to use the internet. Very notably, TikTok teens have taken credit for interfering with President Trump’s June 19th rally in Tulsa, Oklahoma, and creating lower than expected turnout. They did this by starting a trend where everyone signed up for tickets to the rally but didn’t show up. Anticipating a high turnout, Trump’s campaign hosted events at bigger venues, which ended up empty.

This same mastery of social media continued into the summer as TikTokers documented the nationwide George Floyd Protests against police brutality.

The platform of Tiktok, dominated by Gen Z, continued to fuel the protests that lead to a racial reckoning in the United States.

Abby Sanders, a senior at Carlmont, has focused on electoral organizing throughout the 2020 electoral cycle. She continues to focus on the two Georgia senate runoff elections that will decide the balance of the Senate.

“I think especially with a Biden administration, my activism will shift more towards mutual aid, organizing to reach specific policy goals, and advocating for a progressive shift in the Democratic Party that’s going to be essential to our future electoral success,” said Sanders.

Student activists like Wakefield and Sanders aren’t just a blip. JT Eden, a former Carlmont student who graduated last year, ran for the San Carlos city council. He ultimately lost the election but earned 16.6% of the preliminary vote tally in a 4-way election with over 90% turnout.

Despite their influence in the political world, many teens take action without the power to vote themselves. The failure of proposition 18 in California by 44-56% is almost certainly a blow to a lower voting age movement. Prop 18 would have allowed 17 year-olds to vote in a primary or special election if 18 by the general election date. According to Wakefield, “it seems illogical that it didn’t pass [because] it’s just the logical extension of what already exists.”

Some in the state assembly have expressed a desire to lower the full voting age. Assemblyman Evan Low of the 28th district (Silicon Valley) introduced an Amendment to the California Constitution to reduce the state’s voting age to 17.

At a 2019 rally in support of the Amendment, Low said, “Young voters and our Californian’s are ready, willing, and able to participate in our political process.”

His Amendment ultimately passed the state assembly with a vote of 57-16 with six abstentions. The state senate has not yet voted on the Amendment, which would then, if passed, have to be ratified by the state’s voters, an uphill battle considering the defeat of the less transformative Prop 18.

There is still hope for such an amendment to get ratified by the voters because this time around, Prop 18 was overshadowed by more high-profile propositions.

With more and more Gen Z members becoming eligible voters each year, this generation’s power in elections will only grow. In 2018, higher youth turnout was critical to the Democratic gains in the house.

“The 2022 midterms will start picking up in no time,” Sanders said.