Getting the ball rolling at the Belmont Sports Complex 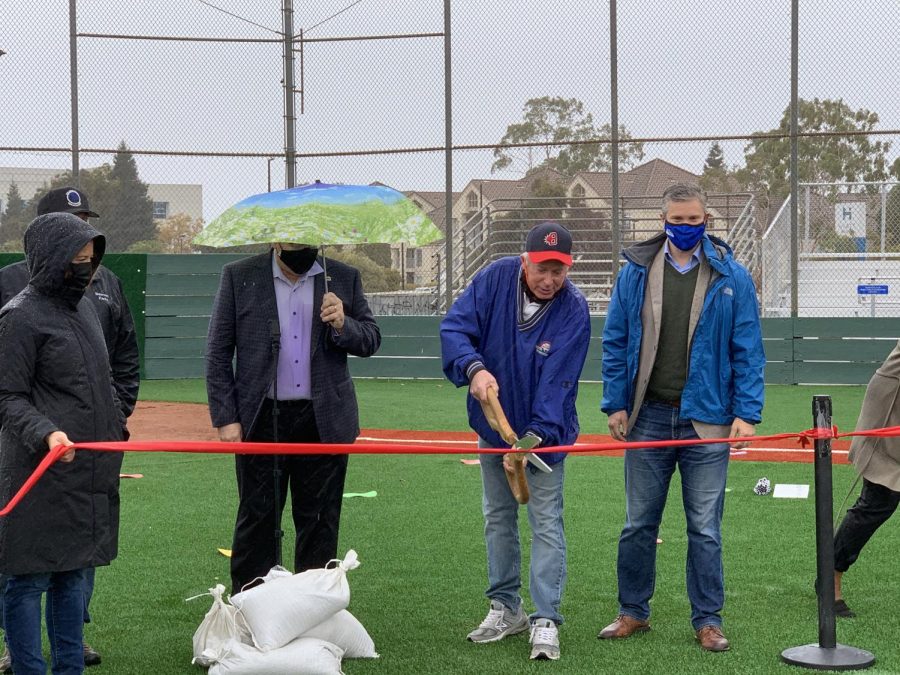 Students who remember playing soccer and baseball at the Belmont Sports Complex may be surprised at what the field looks like today.

At noon on Nov. 17, a ribbon-cutting ceremony was held to celebrate the opening of the newly-turfed North Field of the Belmont Sports Complex, located at 550 Island Park Way. After breaking ground this past March, construction for this project was finished, featuring major revisions and improvements to a field used by many local sports leagues.

The new field features a playing area of 179,240 square feet, with synthetic turf and cork infill. The new surface will reduce labor, maintenance, and operating costs for the city; it will also increase the number of playable hours for sports practices and games by 30%. There is also striping for multi-sport use, including for three U12 soccer fields, one U19 soccer field, Babe Ruth-level baseball, and lacrosse. Additional improvements were made to increase field drainage, accommodate Americans with Disabilities (ADA) spectators, improve the bike path, and create a moveable outfield fence for baseball games.

Due to the ongoing COVID-19 pandemic, the ribbon-cutting event was live-streamed to the public via Zoom. Attendance was limited to a small audience, including Belmont City Council members and commissioners, youth sports league representatives, and the construction team.

Despite the limited crowd and the cold and rainy weather, the excitement of the 25-30 people in attendance was celebratory. Mayor Warren Lieberman summed up the feeling in his speech, and later cut the ceremonial ribbon amidst enthusiastic clapping from all.

“This incredible, beautiful field! I am so thrilled that we were able to work out a compromise that got us a dirt home plate, a dirt pitcher’s mound… Man, what a wonderful day,” Mayor Lieberman said.

Mayor Lieberman’s comments to the crowd of representatives was the culmination of a long journey for this project; turfing this field was in discussion for over a decade. Over the years, many different city council members, commissioners, and local youth sports leaders have discussed different opinions about whether to turf the field or leave it natural grass, the safety of artificial turf materials, and how to accommodate the needs for different sports. One individual who oversaw the project from its inception is Greg Snow, a soccer and baseball coach for the youth leagues that use the sports complex, as well as a member of the board of directors for the local American Youth Soccer Organization (AYSO) and Belmont United soccer programs.

Snow explained that about 12 years ago, an increase in youth athletes highlighted the need for field space, especially for lights during evening practices. In addition to various youth soccer programs, the local Belmont Babe Ruth baseball program consolidated with San Mateo’s program, increasing the number of children playing baseball on the North Field, their home field. The different sports groups were scrambling for what to do with limited field space, especially on one of the few fields in Belmont with evening lights. Snow’s involvement with both soccer and baseball led him to be involved in the project.

“We had to get all the different sports groups on the same page to support the project. It took a long time to come up with plans for a mixed-use field that everyone was happy with. Ultimately, one of the key things that kept the momentum for this project was the collaboration between the city and all the sports groups,” Snow explained. One of the issues tackled during the preliminary planning stages was the accommodation of both soccer and baseball; baseball is typically played with a dirt infield and a grass outfield, as opposed to soccer’s all-grass fields. Carlmont student Stone Savage, who played Babe Ruth baseball at the sports complex in the past, discussed the limitations of playing on a completely turfed field.

“I prefer natural grass and a dirt infield. It’s the way that baseball is supposed to be played. While it may be more affordable and practical for some, it’s just not for me,” Savage said.

In contrast, many soccer players are used to playing on artificial turf fields and appreciate the smooth, consistent surface of artificial turf. Carlmont students Mia Khouri, Maya Blodgett, Ella Yee, and Ariana Goldenshetyn, are all soccer players enthusiastic about the turf that will replace the grass field. Yee summed up their sentiments.

“I think the addition of turf will definitely be better than the grass field, as grass fields like the ones that were at the Belmont Sports Complex tended to be quite uneven. With the nighttime lights, the quality of play for any teams that practice or have games will definitely improve. If I ever do play there again, I imagine it will be much better as the ball will be able to travel faster and there will be less unpredictable bounces of the ball,” Yee said.

Despite differences in opinion about preferences for real grass versus an artificially-turfed field, community leaders and coaches agree that weather and water issues have always plagued the North Field.  Because the Belmont Sports Complex is located near an estuary, there were constant problems with water incursion and drainage of the field.  Long-time youth sports coach Sean White has coached ten years of soccer and three years of baseball at the field; he summarized his relief that the field will finally get rid of the natural grass and the water issues that come with it.

“I’m excited! I’m glad the fields are turfed because we won’t have a rain or weather issue, causing closed fields and canceling practices and games. For all those years, there were always a lot of water issues, I’m glad to get rid of a soggy field,” White said.

AYSO board member and long-time volunteer Avery Lyford emphasized the safety of turfed fields. Having seen many games as a referee, he’s happy that the turf field will be safer and better for all.

“These fields will be more usable and safer than the former grass fields, which became unsafe towards the end of the season with rain leading to mud,” Lyford said.

According to Belmont Parks and Recreation director Brigitte Shearer, Belmont’s city council made the improvement of the Belmont Sports Complex Field a priority in 2017-18 and committed the money to advance the design beyond preliminary plans. Construction financing came from the County of San Mateo in 2019. Recognizing that the field benefits players from across the county, the County Board of Supervisors offered a loan that same year, allowing Belmont to complete construction before costs rose further. The apprehensions about the safety of using artificial grass were alleviated, as organic materials are being used as filler between the artificial turf. In addition, more high school and college fields are re-turfing using synthetic materials, mitigating concerns.

In reconciling the differences in field setup between baseball and soccer, a breakthrough came in 2018: soccer and baseball groups worked out the sizing of soccer fields to allow baseball to have a real dirt mound outside of the soccer boundary. Steve Vega, the current president of Bel-Mateo Babe Ruth Baseball, approved of the compromise and how the turf project came out.

“It will have a positive impact on the community overall. The turfed field means there will be less maintenance – we will only need to maintain the plate and pitcher’s mound,” Vega said.

Vega also pointed out other perks added by the city, including the addition of a new light pole, more ADA-friendly improvements, lights and power in the batting cage, and improvements to the bullpen. While Vega personally prefers traditional dirt and grass, he acknowledged the switch to turf is a practical reality that is spreading to other neighborhood facilities, and it will be better for the sports community overall.

Representing soccer, Belmont United president Tore Svanberg echoed Vega’s sentiment about the communal benefits of the turfed field. In a passionate address at the ceremony, he recognized the hard work of the many councils and city staff, praised the city for its openness throughout the process, and recognized Snow as an ambassador amongst the youth sports clubs. He emphasized the collaboration between the sports leagues and the community’s commitment to making this happen.

“These fields are a tangible demonstration that this community supports and values young people and families. In a year of disruption … these fields and the many games that will soon be played here give us something wonderful to celebrate,” Svanberg said during his address.

Many acknowledged the collaborative efforts during this long-term project, which spanned many groups and agencies. In addition to finances and working out multi-sport compromises, Shearer explained how the city collaborated with other governmental, construction, and environmental bodies through many logistical steps of the project, including working with California’s stormwater program and the San Francisco Bay Regional Water Quality Control Board to manage issues with water drainage on the old field.

Shearer expressed a huge thanks from the City of Belmont and recognized the many people and groups who came together for over a decade to make this happen.

“A lot of people spent a lot of time getting us to where we are today. There were a lot of meetings, a lot of conversations, and a lot of input. I thank the Belmont community for its patience and its dedication to getting this project done, and particularly this year, during such a difficult time. We’re almost done, and we’re very excited to welcome the community back onto the field,” Shearer said.

Moving forward, the Parks and Recreation Commission will be working with the City Council to re-evaluate Belmont’s Parks, Recreation, and Open Space Master Plan. It is possible that the city may continue to evaluate future improvements at the Belmont Sports Complex, but for now, they wanted to make sure the long-talked-about renovation of the North Field was done right.

After over a decade of discussion, local sports leagues, including Babe Ruth, AYSO, and Belmont United. expressed their excitement to get kids back on the field. As long as COVID-19 restrictions are cleared in the coming months, they want the community to know that the leagues are awaiting signups as life gets back on track.