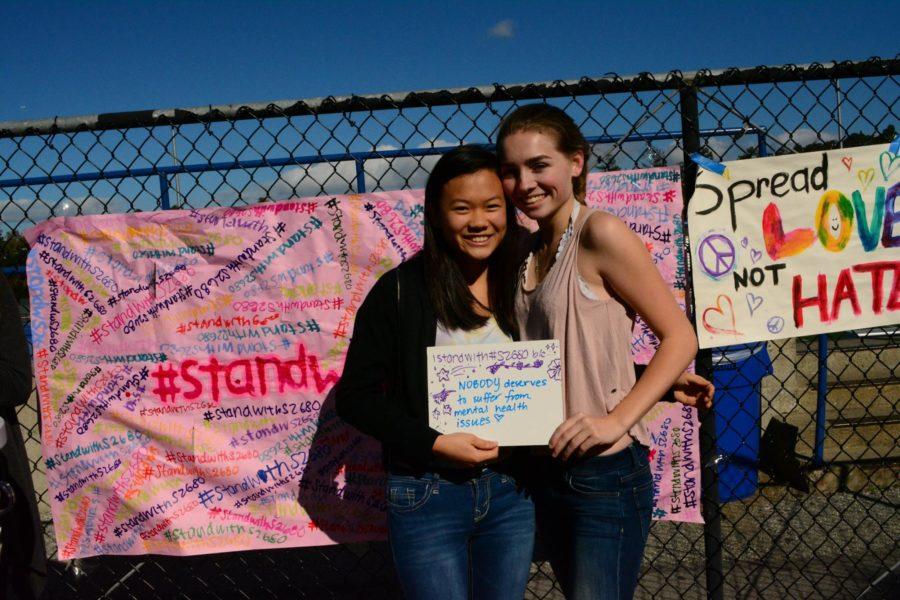 Sophomores Audrey Crook and Chloe Wen advocate for s2680, the Mental Health Reform Act of 2016. Girl Up, along with Feminsim Club and Mental Health Awareness Club, organized this event to gain signatures for the act and support the cause.

Seventy-five percent of HIV-infected youth between the ages of 15-24 are girls.

One in seven girls in developing countries is married before the age of 15.

Fifty percent of all sexual assaults worldwide are against girls 15 or younger.

These are among the many harsh realities faced by many girls in developing countries and throughout the world.

However, an international organization called Girl Up that is partnered with the United Nations Foundation is trying to improve these conditions by advocating for girls’ rights across the globe. As a part of the organization, there have been over 1000 Girl Up Clubs registered in 43 U.S. states and 51 countries.

Sophomores Rachel Gu, Chloe Wen, and Olivia Chow have brought Girl Up to Carlmont for the first time this year, in hopes of spreading awareness and also contribute to the larger organization.

Sophomore and Vice President Chloe Wen said, “I went to the Girl Up Leadership Summit last year and a lot of guest speakers came. On the last day, we went to lobby on Capitol Hill, where we eventually passed the Education For All Act. The summit made me realize Girl Up’s potential, which is why I wanted to bring it to Carlmont.”

The purpose of Girl Up is to empower girls on a global scale — specifically in developing nations — with a focus on a set of challenges that girls face, which include education, health, safety, leadership, and being counted.

“The main goal of Girl Up at Carlmont is to not only educate the community about the ongoing oppression of women in America, but in the rest of the world as well, with six focus countries. We are interacting with numerous funding groups to ensure girls all around the world have equal opportunities for education, which will ultimately positively affect the rest of their lives,” said Wen.

In its first year running, Carlmont’s Girl Up Club has already made some key contributions to the female empowerment community.

Girl Up member Sofia Tam, a junior, said, “Girl Up has had a huge impact so far. The club, specifically, has raised a couple hundred dollars to help girls in third-world countries receive an education, participated in Fortifying Bridges, and has worked to empower girls at Carlmont.”

As Carlmont’s Girl Up Club continues to grow, the club hopes to pursue bigger events to raise awareness of the global problems locally.

Girl Up president and sophomore Rachel Gu said, “In the future, we are planning to hold some fundraising events to promote awareness of these issues. We also recently made coloring books that were drawn by students at Carlmont and we are planning to give them to special-needs kids or students in Ms. Bustamante’s office for stress relief.”

Members of Girl Up enjoy the club, as they have been educated on the global issues that many girls face on a daily basis and are also a part of the global movement to improve them.

“I personally enjoy Girl Up because it’s provided insights on the struggles that young women experience in developing countries, especially in terms of education, which is really important to me,” said Katia Deynega, a sophomore and Girl Up member.