Girls basketball destroys the court and the Bearcats 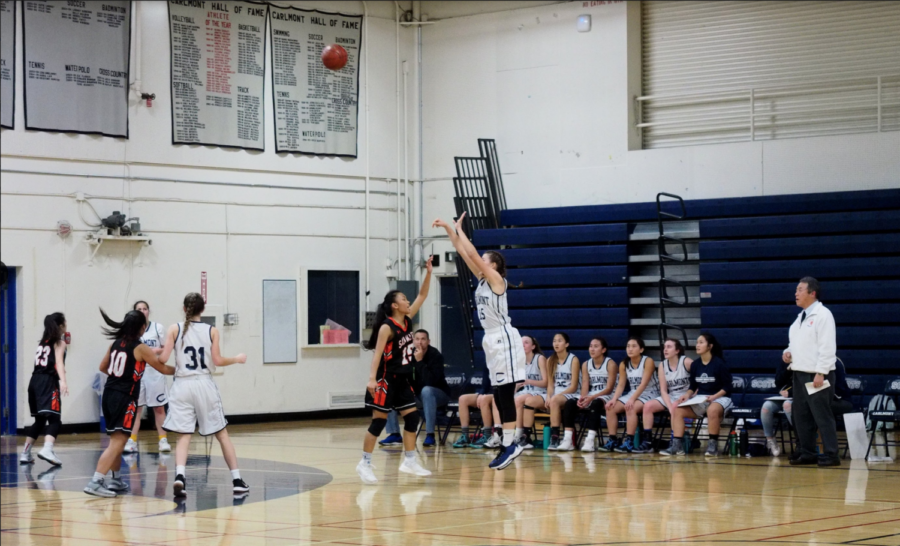 Ashley Trierweiler, a senior, goes for a 3-point shot.

Girls varsity basketball took down the San Mateo Bearcats on Wednesday night, bringing in their fifth home win this season with a score of 72-21.

Within the first possession and 30 seconds of the game, Carlmont went straight to the basket, having Kaylee George, a senior, knock down a 3-pointer. Followed by a point from a free throw by Maddy Palarca-Wong, a senior, and two points from a layup by Valerie Wang, a senior, the Scots quickly took the lead.

Soon after, the Bearcats scored, but with a steal by Evelyn Gordi, a senior, the possession was returned, resulting in a foul on Ashley Trierweiler, a senior, and a scored point for Carlmont.

The Scots’ effective man-to-man defense and opportunistic offensive game led them to the end of the first quarter leading 20-6.

“I think this game was a demonstration of our capabilities as a team and as individual players, so if we play as we did against San Mateo, with aggressive defense and an unselfish offensive approach, we should be able to have a lot of success,” Trierweiler said.

The second quarter started off with San Mateo scoring two points, but Carlmont came back strong, with a layup and 3-pointer by Erica Mendiola, a junior. Some back and forth on the court proved the Scots’ shooting skills to be on fire, with an additional 3-pointer by Trierweiler and two points from free throws by George.

The Scots started to rest their starters and give the bench some playing time, which proved to be a positive game decision for the team.

“For the first time this season, every person on our team played and scored during the game at least once. Our bench really stepped it up in this game and played really well. The starters also stepped it up on the bench as well by cheering on our teammates and keeping the positive energy and focus strong, even though we were winning by a lot,” Trierweiler said.

Carlmont ended the first half of the game with six more points by Trierweiler, two from Gordi, and a 3-pointer by Donya Khonsari, the team’s only sophomore. This brought the score to 43-14, with Carlmont in the lead.

The second half did not treat the Bearcats well, and the Scots were not slowing down.

“Our team played an extremely cohesive game. Sharp passes and hard drives really opened the floor up and made the kick out for the threes possible,” Gordi said.

The Scots kept consistent throughout the second half, utilizing their developing offensive skills.

“One strong point was finding our groove offensively after a few tough games against really physical defensive teams. Everyone on the team scored and it really pumped up our energy for the game start to end,” Wang said.

This led the Scots to finish up the third quarter with a lead of 60-19.

Carlmont only let San Mateo score three points in the last quarter, yet scored a total of 12 points themselves, bringing the final score to 72-21, Carlmont.

Gordi said, “We have a lot of tough games coming up, and we play best when everyone is creating for both themselves and each other. With cohesive playing, we will be able to make plays that will help us win games.”