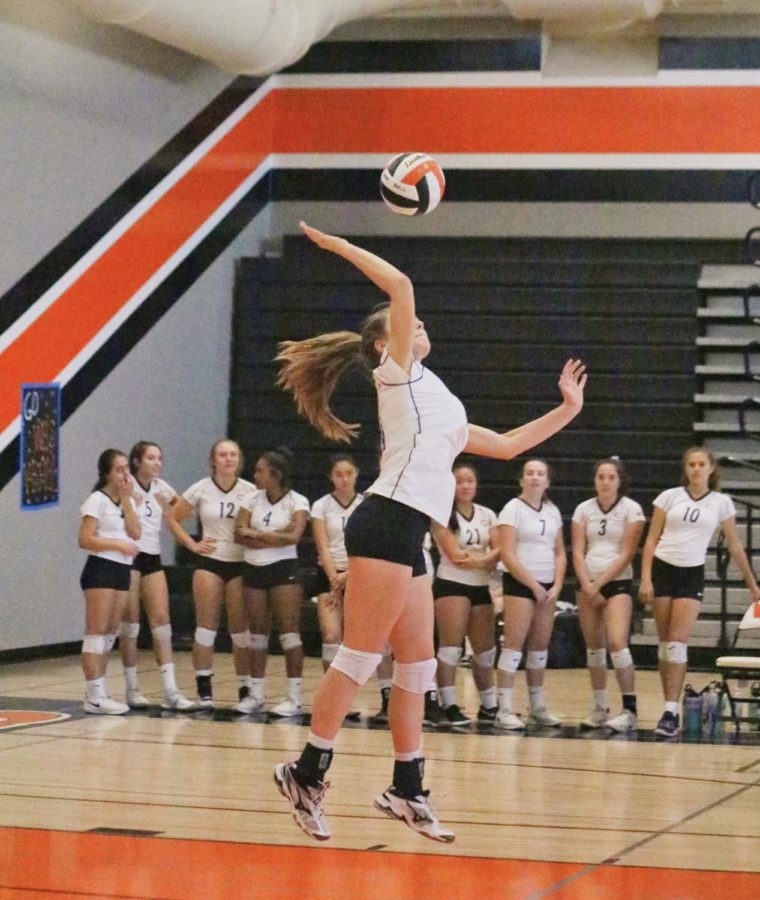 Sophomore Nadia Fedetova serves the ball to the opposing team.

Last week, Carlmont let the team’s JV coach go halfway through his first season with the team. For the game on Oct. 1, varsity coach Michael Lapuz and physical education teacher Irene Oliveira had to step in temporarily to organize the girls.

The team beat Woodside 25-18 in the first set and 25-10 in the second. They maintained their strong sense of pride, passion, and spirit throughout. The girls seemed to be unfazed by this sudden change, as their performance seemed as strong as ever. In spite of the victory, the main focus was still on the absence of the team’s coach.

Varsity coach Michael Lapuz said, “There were some incidents that happened that were not fit for a team of this age. What was said between him and the players did not go through with a lot of parents, so we made the decision to let him go.”

According to Lapuz, Carlmont’s athletic director, Patrick Smith, and a vice-principal had the deciding say. When asked about what exactly was said, Lapuz said he did not have that information.

Sophomore and JV team member Sasha Belov said, “The coaching situation is probably one of the weirdest I have ever encountered. Not only did all the coaches from last year quit, but our new coach also quit … Having our coach this year leave before the season is over is something that has never happened before.”

Belov also spoke on the way the change has affected the team, and said,“I know all the girls were very upset about having all new coaches this year. I know my team misses our old coach from last year.”

Belov was unable to speak on the exact details about what exactly was said, for the sake of the coach’s reputation.

“Now we have Coach Oliveira. This is a big change, but she seems to want to help us out and make this the best season we will have, so we are all very grateful for that,” Belov said.

Oliveira has been assigned to be the new coach for the team. Oliveira previously coached girls volleyball for six years and basketball for ten. In 2006, she even won a CCS award with Carlmont’s girls volleyball team.

“I think [the team] is fantastic. They were very self-sufficient … and they seem like a cohesive group. They like to play and work hard. That is a perfect scenario for me,” Oliveira said.

Oliveira also has some goals she wants to accomplish with her team. Being new to the team, it can be hard to change things up too much, so she is taking a different approach.

“I am not coming in to make a bunch of changes or anything like that. I am coming in to give them somebody solid to depend on,” Oliveira said.

As the season progresses and the story develops, the team’s performance will provide a first-hand look at the direct effects of this dilemma. For sports schedules, coach contacting, and team information, visit Carlmont’s athletic website.