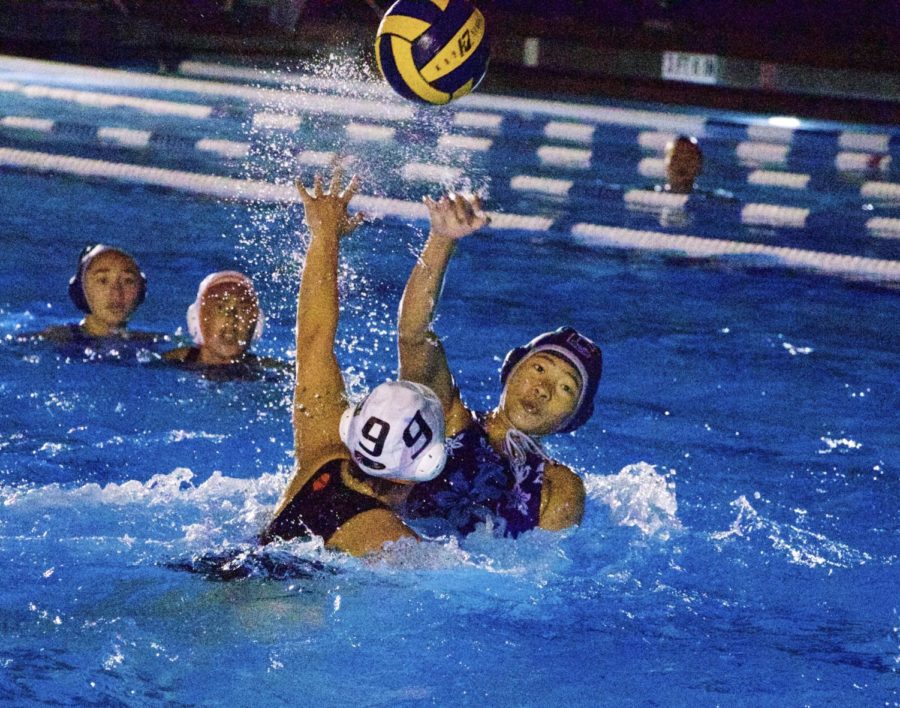 Sophomore Milo Lee finds an open teammate to pass the ball to.

The girls JV water polo team lost to the Half Moon Bay Cougars in a quick 5-4 game which lasted less than an hour.

Before the game, Carlmont’s girls varsity water polo team beat the Cougars in eight quarters, four of which being overtime quarters. The additional quarters delayed the JV girls’ game by 40 minutes.

At the beginning of the season, the Scots beat the Cougars 7-5. The expectations for the Scots coming out of the game with a win was high. The Scots were determined to win.

The game started with Liv Martins, a sophomore, winning the swim-off, resulting in Carlmont gaining possession of the ball. Within the first two minutes of the quarter, the Cougars already set the tone of the game by scoring two quick goals.

According to freshman Noelle Foher, the game intensified when the Cougars aggressively started to attack Carlmont’s goalie.

Sophomore Milo Lee agreed with the aggressive attacks by the Cougars.

“The [Cougars] did a really good job at pulling suits. They weren’t really fast, so that’s why they had to pull our suits and play dirty,” Lee said.

The Cougar’s continued with the aggressive attacks in the second quarter. The Scots continued cheering with enthusiasm. As Lee received a pass from her teammate, she shot the ball into the goal, scoring the Scots’ first point of the game.

“I think we had good communication, and we were, as a team, good at driving,” Grenstam said.

As the game went on, the Scots kept persevering. Molly McNinch, the team’s coach, is also a math teacher at Carlmont.

McNinch said, “Waterpolo is very similar to math. You have to be strong and persevere through things like tough games and tough practices.”

The team carried out this determination into the third quarter, where they scored the most points.

As the third quarter rolled around, the game intensified as the score grew closer. Half Moon Bay’s first shot was blocked by sophomore goalie Sydney Phan. The crowd cheered the Scots on, motivating them to keep on going.

Lee followed up with scoring the second point for the Scots. After two turnovers, Grenstam was able to score the third point for Carlmont, making the score 4-3 with the Scots behind the Cougars.

“We had a really strong defense. Our swimming was really strong, and we had some really good shots some girls got,” McNinch said.

The fourth quarter started out looking good for Carlmont. The Cougars were steadily ahead in the game until Foehr scored the fourth point to tie the game. However, with just two minutes left during the last quarter, the Cougars scored the final point of the game, resulting in a Half Moon Bay victory with the score being 5-4.

Despite the loss, the Scots still had a great time and did not let the loss discourage them.

“The girls on JV this year are phenomenal. They are super kind girls, super happy, and have a really good spirit. So every game, win or lose, is always a fun game,” McNinch said.