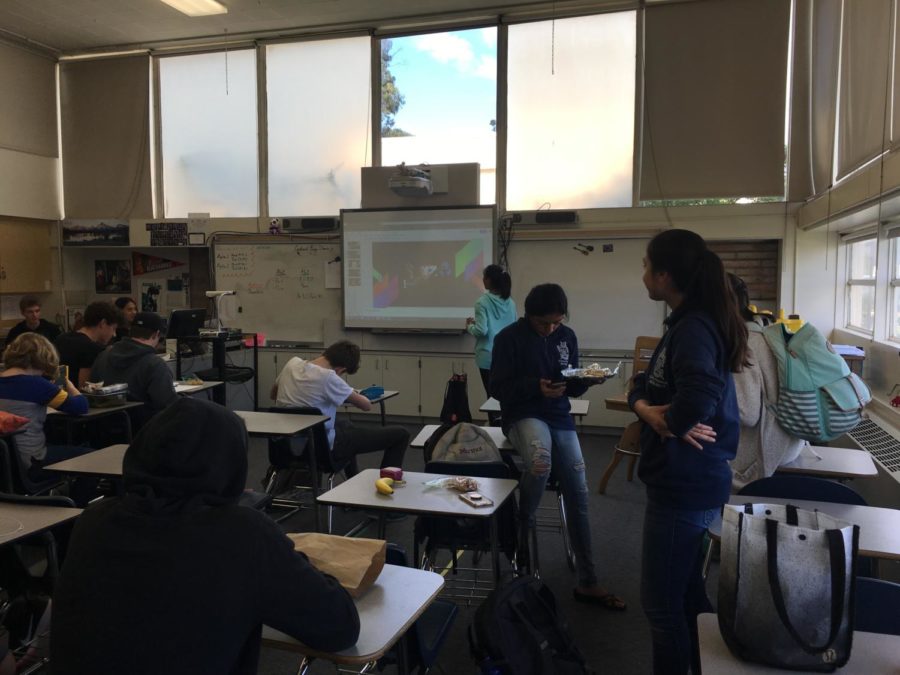 Girls' Tennis Club members eat lunch and prepare to participate in the activities at the meeting on March 12.

Amid many other well-meaning clubs at Carlmont, the Girls’ Tennis Club hopes to introduce people to the sport on and off of campus.

The club welcomes all students to join, even if they do not have any tennis experience. As a first-year club at Carlmont, Girls’ Tennis Club has 40 members who aim to promote tennis, especially for girls.

“People may feel hesitant to join if they don’t play tennis, but it really is a fun, great environment,” said Cindy Chen, a sophomore. “I have never felt excluded in the club, even though I don’t play tennis.”

Club President and sophomore Annika Lin started the club at Carlmont for her Girl Scouts Gold Award Project and branched out to educate students at Sandpiper Middle School in Redwood Shores.

“It’s mainly the club members that are on the Girls Varsity team who go to Sandpiper to be volunteer coaches for the students,” said Lin. “Since the middle school was built last year, they don’t have a tennis program or team yet.”

The club members who participate in teaching go to Sandpiper on every Tuesday afternoon. There, they help the students and school build a solid tennis program.

“I was a bit nervous at first when we started to teach,” said club member Lily Gitteos, a sophomore. “But as we continued the program, all of the students were really nice, fun, and obedient.”

As the members continued to coach, they saw that their leadership and teaching skills also improved along with the students’ tennis skills.

“We’ve definitely gotten a lot better at teaching each week and are a lot more comfortable with giving directions. We’ve also learned how to give constructive criticism in a positive way,” Gitteos said.

Along with spreading enthusiasm for tennis at Sandpiper, the club members plan to draw more attention to the Girls’ Tennis Club at Carlmont.

“Within the club, I hope that members will bring more and more friends to the meetings,” Lin said. “We haven’t been putting up flyers, but we do have an Instagram account to bring in more attention.”

The club meets every second and fourth Monday of the month in room E12.