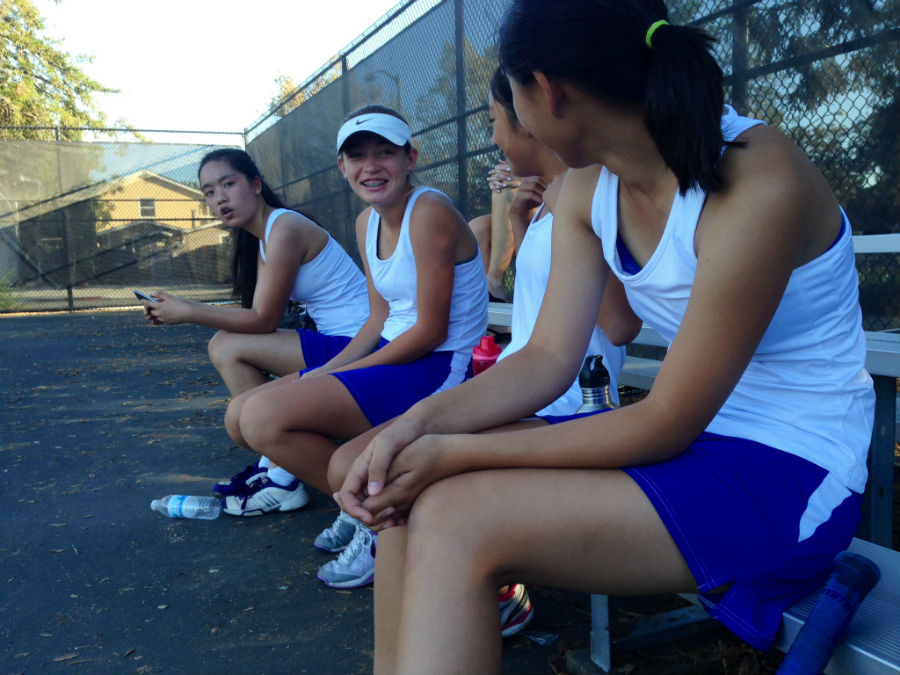 Ivy Nguyen, Juliette Rencoret and Jessica Ma converse on the sidelines of a tennis match against Sequoia High School.

The girls tennis season has just started off, and Carlmont is off to a strong start. This year there are 24 girls on the team, which include multiple new faces such as freshmen Kristen Ma, Sandra Strongin, and Juliette Rencoret.

“I think that they’re all super nice, cool, and are working really hard to improve their tennis skills and progress on the team,” said sophomore Snehal Pandey.

In order for the players to get to know each other better, a team bonding sleepover has been organized.

“Team bonding is really important to have with team sports because it really helps the team become a team and brings us closer together,” said junior Morgan Watson.

In addition, the team uniforms have arrived this week. These help to unify the team and make all the players look cohesive.

Head coach, Amina Doar, and assistant coach, Paula Sobey, have been organizing and guiding the team this year by setting practice matches and having players hone in on their skills. Doar and Sobey keep the team on a schedule of conditioning, after practice matches have been completed, which include abdominal exercises on Mondays, relay races on Tuesdays, footwork exercises on Wednesdays and distance running on Thursdays. There are no practices on Fridays so that players can attend to other commitments such as doctors appointments, volunteering, and socializing.

This will be Doar’s last year as a coach for the Carlmont tennis team. She has recently found out that she is expecting her second child, and may be moving out of the area.

Doar said, “Regardless of whether or not this is my last season with the Carlmont girls, I plan on making it the best one yet, and so far we are off to a fantastic start. If I do move away, I hope to be actively involved in finding a great replacement who can help the team reach higher success and break new school records as we have done over the past four years.”

Doar has devoted large amounts of time and energy working to make the tennis team the best it can be. Her efforts have been rewarded with Carlmont reaching CCS multiple times; she will be greatly missed next year.

“It makes me really sad [that Doar is leaving]. She’s an amazing coach and so supportive of everyone!” said Pandey.