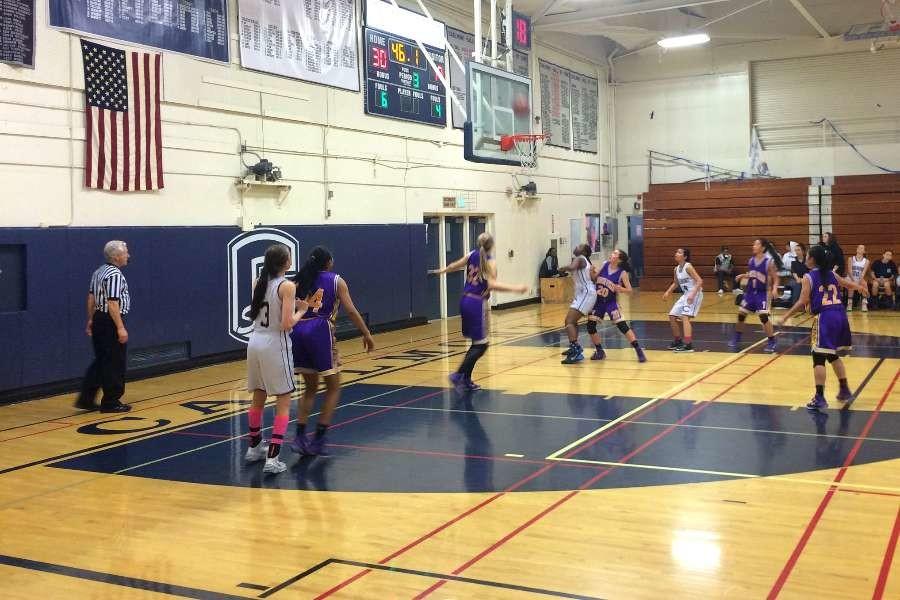 Senior Sabrina Miller anxiously watches her shot go in, while sophomore Alyssa Hayes is ready for the rebound

The girls varsity basketball team came out victorious in their first Central Coast Section (CCS) game on Thursday, Feb. 26, with a final score of 45-32.

The varsity girls started off CCS playing Monta Vista, a team they had never played before, and managed to stay ahead every quarter.

“Monta Vista was definitely a good competitor and they put up a fight. I thought we played as a team and that’s what helped us execute the proper fundamentals and techniques in order to win,” said sophomore Hannah Wright.

The Lady Scots pulled ahead from the beginning, and ended the first quarter with more than double a lead, 13-6.

“They were a very aggressive and competitive team, and since they were losing I think that was a factor in their attitudes,” said Wright.

Monta Vista noticeably played more aggressively than what was expected, but that did not phase Carlmont.

The second quarter held just as much energy and competition as the first, if not more.

After Monta Vista gained a point during a free throw, senior Stephannie Tong-Woo scored a three-pointer for Carlmont, bringing the score up 16-7.

By the end of the second quarter, the score had almost doubled, with Carlmont still in the lead 22-14.

“Playing Monta Vista was thrilling, but tough at times. When the game got close, we had to come together as a team to make sure we brought out what we had to in order to succeed,” said senior Sabrina Miller.

After the first half was over, the game and the girls became more aggressive and pushy.

In the third quarter alone, there were over five fouls between the two teams, and those were only the ones called by the referee’s.

“The officiating wasn’t the best, but it never is. I think the referee’s called it pretty even throughout the game, but they can’t see everything,” said Wright.

The third quarter ended with a score of 34-23, with the help of sophomore Alyssa Hayes, who scored with five seconds left in the period.

Select players from Monta Vista showed their “sportsmanship” in the final quarter.

While Carlmont was shooting, a recurring event would happen where as a Carlmont player was on the verge of shooting, a certain Monta Vista player would begin screaming, perhaps to distract the shooter.

Nonetheless, Carlmont remained ahead in the fourth quarter, ending the CCS game with a 45-32 win.

“I think that for my last game, it went really well. Our team connected very nicely and most importantly we all played having fun,” said Miller.

“I think the game went really well. The whole team just went out there and shared the ball and had fun because we knew it could have been our last game,” said Tong-Woo.