Girls’ varsity lacrosse defeated by Sequoia in a close game 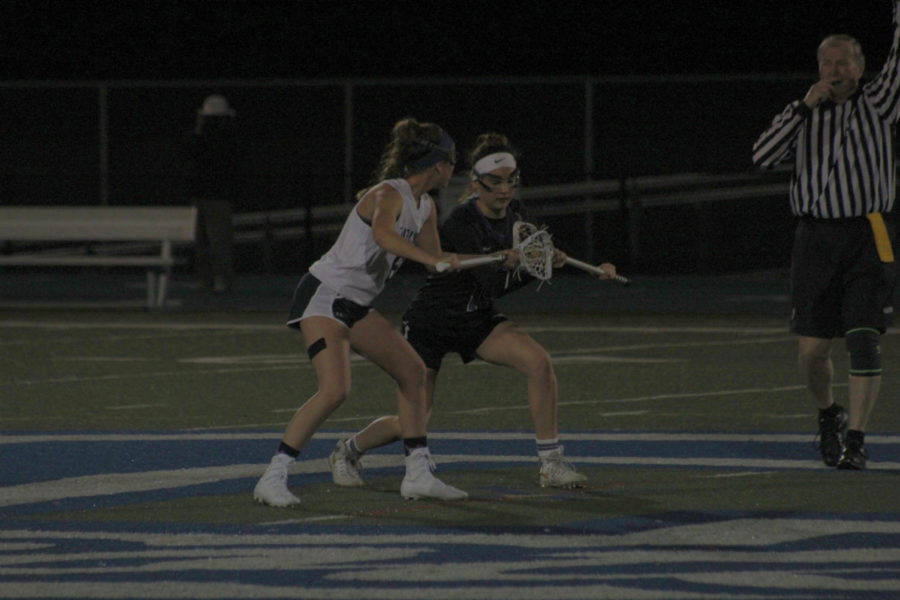 The Carlmont and Sequoia teams prepare face off after a point is scored.

The girls’ varsity lacrosse team was narrowly defeated by Sequoia, 11-10, on March 7.

The game started off with Sequoia in possession of the ball, which then led to Sequoia scoring twice within the first six minutes. After this period, the Scots scored their first point of the game. Sequoia responded by quickly scoring again. This led to a nine-minute stalemate, and each team seemed to maintain possession of the ball for about the same amount of time. This continued until Sequoia scored, bringing the score to 4-1. Carlmont was losing.

After the Scots almost scored on the Ravens on two separate occasions, Sequoia took the ball to the Carlmont goal and scored against the Scots.

At the beginning of the second half, the score was in Sequoia’s favor by six goals. Sequoia had the ball and quickly advanced down the field to score toward Carlmont’s goal once again. The Scots countered this and scored their second point of the game.

“At halftime, everyone pumped each other up and then we just passed to the team better and made it happen,” said freshman player Sophie Brack.

After their goalie made two consecutive saves, the Scots were able to score two more times. With the score standing at 4-9 in favor of Sequoia, the Scots were starting to make a comeback.

Then, in a blur of back and forth, and brief periods of struggle, the Scots scored goal after goal, further narrowing the point gap to a difference of three.

“We came back. I mean it was great. I think we just got really energized and focused,” said sophomore player Anna Alvarez-Rutz

The Scots brought the score to a tie of 10-10, the Ravens pulled ahead of the Scots, then the Scots were able to score one last point before the end of the game. However, the Ravens brought the game to their advantage in the last few minutes and took home a victory.

Still, the team is proud.

“This is only our second game together, so for them to have all that chemistry, that’s amazing,” said head coach Annie Thompson

The next girls’ varsity lacrosse game will be against Aragon high school on March 13.