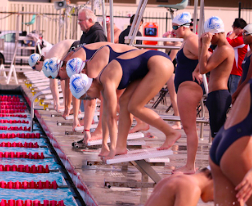 The varsity girls' swim team prepares for a race against the Burlingame Panthers on March 9.

The squad was defeated much sooner than they anticipated, and the high expectations set for them were not met.

“Our season could have ended better [last year], and it was really tough. A lot of our team was sick at the time, and we didn’t place the way we wanted to,” said Amy Fullerton, a junior and a three-year varsity swimmer.

However, like any year, a new season came around for the Scots’ girls’ swim team in 2018 to prove that they are a force to be reckoned with. On Jan. 29, tryouts rolled around for the team and after just a few practices, it was clear that this year was different.

“Ever since the first day I could tell this year would be better than last. We have been getting better and better and this year we’re all friends and we know what each other’s speeds are so we race and just make each other better,” said Karen Li, a junior and a three-year varsity swimmer.

One reason that the Lady Scots are projected to be dominant this year is their deep roster. The team lost no seniors from last season, and they are led by five upperclassmen who have been on varsity since they were freshman, which adds experience and knowledge to the team.

Perhaps the biggest reason for the hype in this upcoming season is Morgan Hawes, a freshman who has already broken two records: the 200-yard freestyle record and the 100-yard freestyle. Hawes adds hard work, skill, and support to the Lady Scots.

“I try my best to be a hard worker and I really like to try my best no matter what during meets. I also love to encourage and cheer on people during meets. My main goal is to get better every day during practice so I can help the team succeed in the long run,” Hawes said.

Varsity is the highest level an athlete can make in that particular sport in high school. Generally, it consists of mostly juniors and seniors, however, this isn’t the case for Hawes who is a rare talent.

“She’s amazing. She’s breaking records as a freshman that girls who are five years older than her haven’t broken. For her to be as good as she and to be that young is rare. She’ll have lots of success this year and for many years to come,” Fullerton said.

The goal for the team is to not only make up for the disappointing season last year but to be champions once again.

“I see ourselves coming in first or second in PALs. Our rival team Menlo Atherton lost some swimmers last year and they’re our main obstacle. Based on our performance last week I think we are strong enough to do it,” said Li.

The girls swim team hopes to continue the year going strong with their next meet.