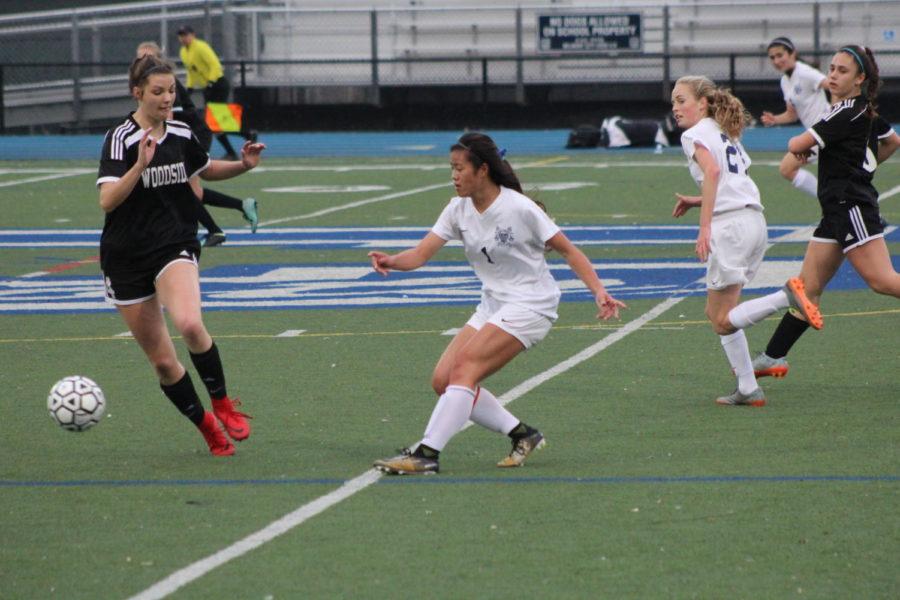 Samantha Phan, a junior, fights for the ball with hopes of scoring for the Scots.

Woodside came out vengeful towards Carlmont after a 2-1 loss last Saturday to the Scots.

In a home game on Jan. 16, the Wildcats began their attack early with two shots on goal early in the first half which narrowly missed. However, Carlmont struck back with a corner kick in the 15th minute that would lead to a header from Samantha Tolu, a junior, that sailed over the crossbar almost giving the Scots their first goal.
“Our team really could have capitalized on our chances a lot more and finished them off better in the second half but that hasn’t been our main focus recently,” said captain Angie Grundig, a senior.
Both teams remained physical throughout the game.

“Woodside came out strong again and pushed the tempo but my team didn’t give up and they fought back,” said head coach Tina Smith.

The effort and tenacity of both teams led to a goalless first half.  Then, Carlmont picked up the pace in the second half with the Scots gaining possession of the ball for the most of the half.

While Woodside had a chance to take the lead early in the second half with a clear-path shot on goal, it was miraculously saved off of the right foot of goalkeeper Sarah Stulbarg, a sophomore.

“She was dribbling directly at me [and] about to shoot the ball so I knew I had to do something to stop her,” Stulbarg said. “When she shot the ball, I decided to stick my foot out and I ended up deflecting it.”

The Scots and Wildcats struggled to find the back of the net in the second half as many chances were cleared well by both goalkeepers. But, in the 64th minute, a corner that led to a strike by the far-post by Carlmont midfielder Rachel Amir Chatman was deflected by a Woodside defender, almost giving the Scots the 1-0 lead.

After 80 minutes of hard-fought soccer, the game had ended in a scoreless draw.

“I thought our team played well today against Woodside but we could have connected and executed our offense a little bit better as we have done better before,” said Grundig. “Woodside really picked up their game today and we have to be able to play up to their level better the next time we see them.”