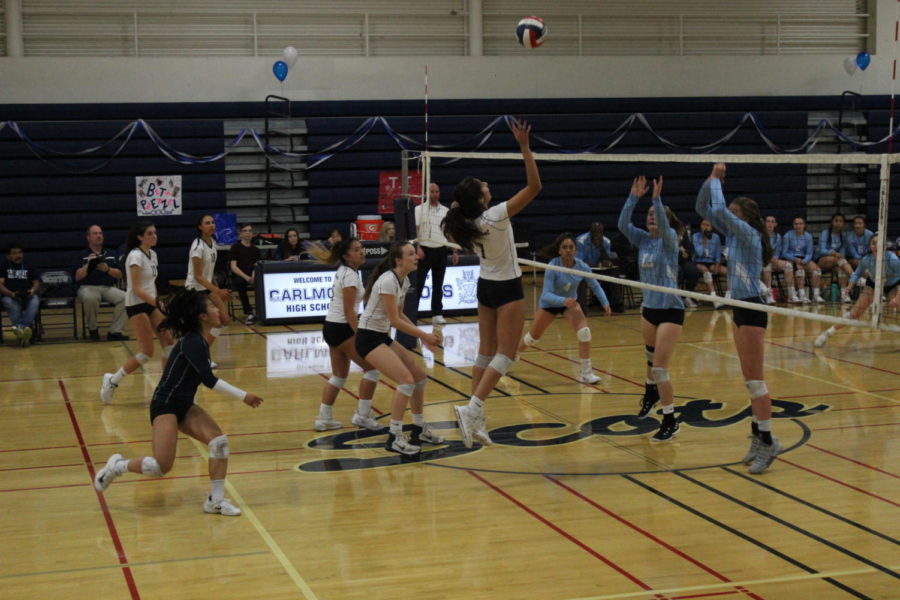 Alisha Mitha, a junior, is poised to slam the ball down on the Hillsdale Knights.

This night was very important for the players, especially for the seniors, as it was the last game of the regular season that the seniors will play during their high school careers.

Despite that thought, the Carlmont team was ready to go. They dominated at the beginning of the first set, making the score to 10-4.  The Knights made a comeback forcing the Scots to call a timeout to stop the momentum. After the timeout, Scots went on a rapid point streak leading to the Scots winning in the first match.

The start of the second set began really well for the Scots, who went up 8-4. The score was due primarily to Morgan McClellan’s contribution on offense and defense.

Suddenly, the Knights started to come back with strong defense and tie the game at 11-11. Soon after, the Knights gained a lead over the Scots with the score 12-14.

At this time, the Scots were forced to call a timeout to try to stop the momentum, yet again. However, this one was more a way to recuperate the Scots themselves and grow their communication.

“My team [Scots] had really good energy the whole game and communicated very well on the court allowing us to get a fast win and finish in 3 sets,” said Jules Tan, a sophomore.

After this timeout, the Scots were in a close battle as the score hung at 16-15. The Knights took a timeout to strategize a way to pass the Scots.

The Scots’ offense, run by McClellan, led the Carlmont to take the lead and finish off the set 25-20. The last point of the set was scored by Clara Vltavsky, a senior.

At the start of the third set, the Scots got off to a fast start and quickly dominated the Knights 20-9.

But then the Knights did not give up and brought the score back on a 2-5 run by exploiting the Scots’ defense.

When the score reached 22-14, the Scots called a timeout that was able to do get their defense together.

Still, the two teams clashed with really close rallies. But the Scots come out triumphant with a score of 25-19. This was a big win for the Scots and it finished off their season with a bang.

It was a solid victory to leave the seniors with.