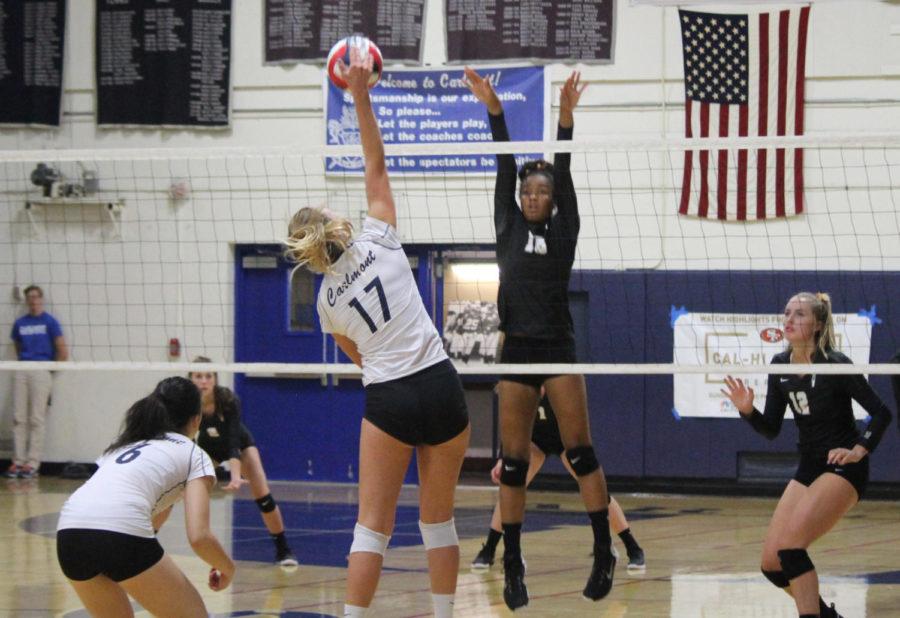 Ranked number one in the state for the past five years, the Archbishop Mitty Monarchs defeated the Scots in a three set pre-season match on Tuesday, Aug. 28.

Uncertainty filled the air as the Scots faced the Monarchs due to the fact that while the Monarchs ranked No.1 in the state last year, the last time the two faced was in a tournament last season in which the Scots won. However, both teams had a lot of strong players who graduated last year and with each new season comes new players and a need for players to adjust and form connections with one another.

Despite the stress that may arise when facing an opponent such as Mitty, senior Tiara Testa was determined to try her best.

“They are a pretty strong team, but you have to just play your best and not let any of that mess with your head,” said Testa. “I just wanna see us work together and when we make mistakes, not to just dwell on them and if we are down, continue fighting as hard as we can.”

The head of the Carlmont varsity team, Coach Crader was also aware of the challenge the girls would face against Mitty, but rather than focusing on beating the Monarchs, Crader viewed this match as an opportunity for the Scots to learn.

“[Mitty] has really talented players, they have excellent coaching, and year after year Mitty is usually the best program in California,” said Crader. “So with that in mind, it’s a great opportunity for all three of teams to play at a really high level and test ourselves at the beginning of the season. We are still working on our chemistry, we have a lot of new girls and we graduated a lot of new girls so I think that as the team continues to build those connections their skills and talents will start showing more and more as the season progresses.“

The two teams came out strong at first, however, as the Monarchs gained possession, their strong servers earned them several aces as the Scots struggled to receive the ball. With each point gained by the Monarchs, it became apparent that the Scots would have to improve their receiving and passing as a team if they wanted to win.

“The first half was really rough,” said Morgan McClellan, a junior. “I think we are really young and as a team, we’re just not there yet. You could tell that we were individuals, we weren’t playing together and I think it was almost like we were scared.”

Though serves made by players such as McClellan helped Carlmont gain back points, the first set ended with a score of 11-25. As players prepared for the second set, Crader advised the girls to stay calm, focused, and have better control when receiving.

With a large blare signaling that it was time to return to the courts, the Scots quickly huddled for a short cheer before joining the Monarchs on the court. With the cheers of their fellow teammates echoing the gym, the Scots soon went head to head with the Monarchs in a series of intense rallies.

Carlmont continued to struggle against the powerful spikers of Mitty, such as senior Magan Ahem. As the players began recognizing Mitty’s pattern of plays, the Scots began blocking more of Mitty’s attacks and engaging in several jousts. With the score at 13-15, the two teams went into a short timeout.

The game resumed with several technical errors made by the Scots, causing them to fall even further behind. As the number of miss-hits and unreturned attacks increased, the second set ended with a second loss for the Scots 16-25.

The final set was more intense as the Scots were determined to give it their all. Despite ending the set with a score of 21-25, players such as Valentina Yudin-Baehrle, a junior at Carlmont, took their pre-season loss as a learning experience.

“I think going against this team we knew that they were going to be a challenge so we had to have a confident and determined mindset of just going for everything and giving everything you got,” said Yudin-Baehrle, a junior at Carlmont. “I think when you play a team as good as this one, it pushes the team to a higher level and we were challenged so we had to raise our bar and we really hustled.”

Coach Walton of the Carlmont JV team had a similar outlook as Yudin-Baehrle.

“It was a good learning experience,” said Walton. “Our serve-receive was a little tough, but it was a great effort […] Serving and passing is crucial. If your passing is off then and it’s a long night, then you are just giving up points and that goes for serving as well, but we’ll fix it. We’ll go to practice tomorrow and get ready for the Battle of Belmont this Thursday.”

The Battle of Belmont is another pre-season game in which the Scots will face up against local rival, the Notre Dame Tigers this Thursday.