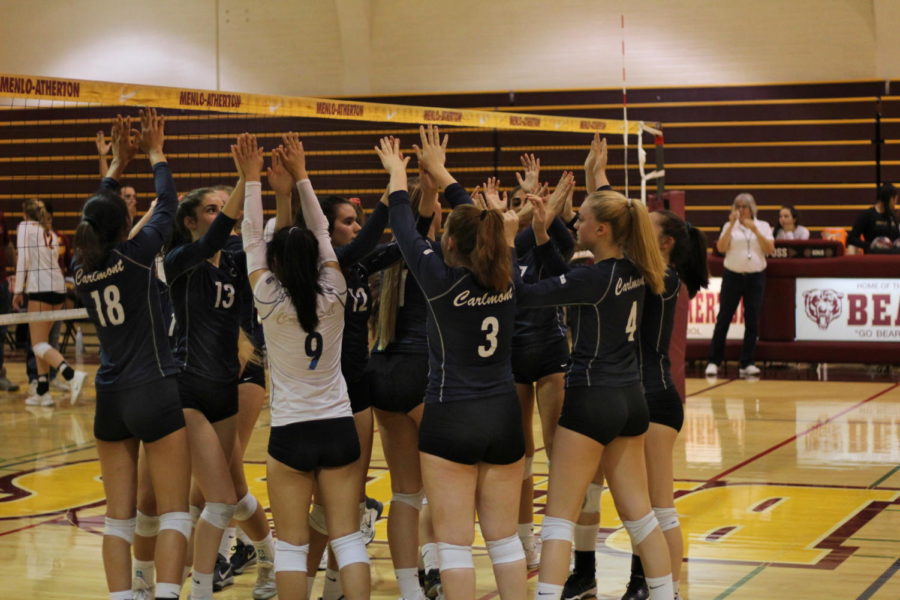 The Scots celebrate in preparation for the game.

After four tight matches, the Menlo-Atherton (M-A) Bears took the win over the Carlmont Scots, bringing the Scots’ record to 5-4.

The Bears took the first lead of the game, but a missed serve and a kill from Clara Vltavsky, a senior, brought the score to 3-2, still in favor of M-A.

However, a kill from Morgan McClellan, a junior, set off a winning streak for the Scots, allowing them to score four consecutive points. The Bears took control again and eventually forced a timeout from Carlmont at 7-11.

“The first set gave us more chances than it seemed like and sometimes it’s like they gave us an easy ball and we’ve got to get a better attack out of that,” said head coach Chris Crader.

This timeout didn’t seem to help the Scots much, however, as M-A extended their lead afterward to eventually get to 18-11. A kill by sophomore Leah McMillen allowed the Scots to make a small push, but the Bears came back and widened the gap.

“When someone gets out of rhythm it pushes down the whole team as everyone becomes more focused on themselves instead of thinking about the team,” said Katrina Wong, a senior.

At 21-14, the Bears leading, Carlmont took a final stand. The Scots took four points but fell short as after, the Bears took possession and closed out the game, winning 25-19.

The second game started out differently for the Scots, as they took the first two points of the match. Great plays by both Wong and freshman Grace Xu kept the Scots in the lead. The Bears eventually tied it up at 8-8 and two very close calls allowed them to tie it again at 10-10.

An ace by Elizabeth Prozell, a senior, allowed the Scots to retake the lead again and bring the score to 13-10.

Some back and forth eventually led to a timeout called by the Bears as the Scots took a small lead. This timeout seemed to be all the Bears needed as they went on a six-point run, forcing two timeouts from Carlmont.

The game went back and forth again, but the Bears came out on top, the final score being 25-22.

“It’s tough because the first two sets were there, and we were doing a lot of things right and if we had made a few adjustments this game would have gone differently,” Crader said.

The third match started off decently for the Scots as well, as a block by Vltavsky gained them the first point. The Bears came back strong, though, and forced a timeout from Carlmont at 2-7.

This timeout worked for the Scots as they brought the score back to 6-8, led by McClellan serving. A block by Mitha gave the Scots some energy and they forced a timeout from M-A after taking the lead, 11-10.

A long back and forth between the Scots and the Bears yielded no lead greater than two points by any team, but at 17-15, Bears leading, Carlmont called a timeout. A couple of long rallies and a great save by Xu brought the score to 19-20, Carlmont still trailing.

The Bears ran with their lead and brought the score to 23-20, but the Scots fought back and forced a timeout from M-A at 23-22, the Bears still in the lead.

“Winning a match like that always boosts our confidence because since it was so tight it could’ve gone either way, and it gave us a lot of hope as a team,” said Valentina Baehrle, a junior.

The final match started out shakily for the Scots. After Jairo Sierra, the Bears’ head coach, got a red card, the Scots became relaxed, allowing M-A to take a 13-point lead.

The Scots mounted a comeback and were able to bring the score to 6-15, but were unable to contain the raging Bears. M-A took the win in the fourth match with a final score of 25-10.

“It takes a toll on a lot of people as they feel they could have done better, but as a captain, it’s my responsibility to make sure that the positivity and encouragement stay high moving into our next game,” Wong said.