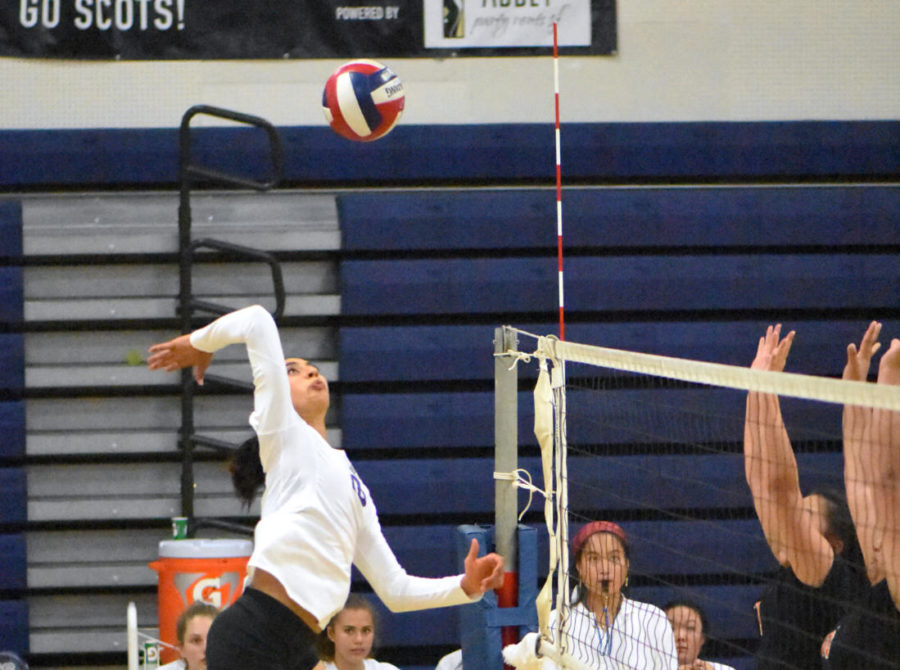 Morgan McClellan, a senior, goes up for a hit against opposing San Mateo blockers.

The Scots started the game off strong, quickly winning the first set 25-10.

However, in the second set, San Mateo came back stronger and more precise. They kept the point differential to a minimum for most of set. But despite any mistakes, Carlmont was able to pull through at the end of the set to win only by a couple points.

“When things didn’t work out, it was when we had our own mistakes. A lot of the balls that should’ve been picked up weren’t picked, so I think we have to work more on communication,” said Mike Lapuz, varsity head coach.

Lapuz wants his team to move on to the playoffs this season, which means that they must become more consistent and make fewer mistakes.

“It’s good that we’re having fun, but we need to take it seriously because that was our issue. We went into the second set just assuming we were going to win,” said Morgan McClellan, a senior. “So we were neck and neck with them the whole set until we realized that at the very end, we weren’t 10 points ahead like we were in the first set. We realized that we had to be serious and win this game.”

After taking a couple of breaths, Carlmont entered the third set with new intentions.

With only one set to win to finish off the game, the Scots played with newfound energy and intensity. San Mateo began to doubt themselves and made many mistakes, giving Carlmont the lead.

Despite the struggle, Carlmont eventually won the last set 25-14. The Scots only played three sets and came out victorious in all of them.

Carlmont’s next game is on Oct. 1 against Woodside High School.