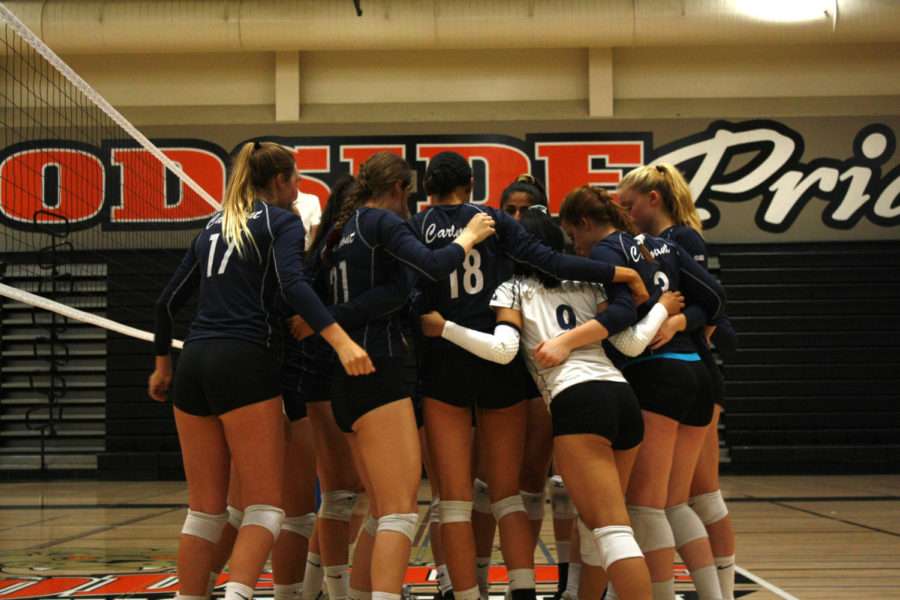 The Scots huddle and prepare take on the Wildcats.

After five nail-biting sets, the Woodside Wildcats defeated the Carlmont Scots, giving the Scots an official league record of 7-5.

The Wildcats took the lead of the first set, but a double block by Tiara Testa, a senior, and Gaby Pierce, a junior, led the Scots to tie up the score 5-5. The two teams continued to play neck and neck, the scoreboard reaching 10-10 when Morgan McClellan, a junior, and Elizabeth Prozell, a senior, put up yet another solid double block.

With loud cheering and enthusiasm, the Scots racked up a number of kills and digs, keeping the score close with the Wildcats.

The Scots resulted in winning the first set 26-24; their accuracy in serve receive, as well as smart ball placement, knocked the Wildcats out of system.

“As long as we walk into the game with a positive attitude and lots of energy, we have the opportunity to perform well,” Pierce said.

With confidence radiating on the court, the Scots looked into the second set with high heads, concentration still set in every player’s face.

Carlmont took the lead in the second set, as Clara Vltavsky, a senior, got an immediate kill, followed by another hard angle kill by McClellan. Providing Woodside with no opportunity to earn a few points or go on a run, McClellan took advantage of a high overpass by putting the ball down and ending the next play, as Scots lead 5-1. Not wasting any time, Pierce spiked the ball, earning another point, as the score proceeded to 10-8.

In response, after some tight back and forth plays, the Wildcats coach, Sonja Gavioli, called for a timeout, the score resting at 15-11, Scots still ahead.

Following the timeout, Woodside ran a few consistent plays, forcing the Scots to settle down and focus on staying disciplined. With a tricky back set to Alisha Mitha, a junior, by setter Katie Wong, a senior, Mitha swung and placed the ball straight down the line. However, an arguably miscall by the line judge gave Woodside momentum, causing Crader to signal for a timeout, the score 16-15, Scots barely in the lead.

“Our stubborn determination lets us go for every ball even if it means running into someone or something, and when we get down, instead of staying down, we let our anger motivate us to turn ourselves around,” said Valentina Baehrle, a junior.

Keeping calm with smiles all around, the Scots fought hard but lost the second set 23-25; their defensive strategy and failure to fully cover the court let them down.

The Scots remained optimistic and started with a clean slate when entering the third set, both teams tied 1-1 overall.

A double block by McClellan and Prozell rewarded the Scots with the first point of the set. However soon after, Woodside ran a quick offensive play and caused the Scots to shank the next ball. With three aces by freshman Grace Xu, the game rapidly tied 8-8. After another tough play, Crader called a timeout for the team, the score 9-12.

Issues with communication in serve receive allowed the Wildcats to gain a lead on the Scots, the score reaching 10-14 before Pierce put up a controlled block on a middle.

With a final strong kill on the back line by the Wildcats, the Scots fell short in the third set, 14-25.

“Personally, I’ve struggled this season with being too hard on myself, and as a team that mentality has cost us games in the past,” Pierce said.

Forming a new line up, the Scots claimed their domination on the court with a kill by McClellan and a kill by Vltavsky, the score 2-0. As the Wildcats were unable to recover from unpredictable passes, the Scots continued to push on. Another ace by Xu moved the score 10-5. Improved serve receive and a natural flowing court movement from the Scots urged the Wildcats to call a timeout at 11-5.

However, the timeout was no help, as the Scots took advantage of the scattered defense from the Wildcats, advancing the score 16-8. Short plays due to inconsistency allowed Carlmont to extend to a 10 point lead, as Pierce ended the game with an offensive slide, the score 25-16.

“Our offense is our biggest strength because we can put the ball down to end the play,” said Kayla Lunde, a sophomore.

The easy comeback for the Scots in the fourth set forced both teams to a final fifth set, which goes to 15 points.

The final set started out strong for Carlmont, as an easy serve from Woodside gave Lunde the opportunity to get a kill, the score standing at 4-2. Several long rallies and many impressive out of system saves by both opponents set the score to 9 all before Crader called a timeout to break the tension.

Shaky serve receive and an overpass by the Scots enabled Woodside to pull away with a new lead. Woodside’s strong offense caused trouble for Carlmont, and a missed serve brought Woodside to game point. Unable to recuperate from the point loss, the Scots couldn’t maintain the Wildcats, the long game ending 12-15.

Carlmont struggled to earn redemption from their previous loss against Woodside but will work to maintain confidence regardless win or lose.

“I thought Woodside played really well. They played much better than when we played them last time,” Crader said.

The Woodside Wildcats are set to play an away game against the Half Moon Bay Cougars this Thursday.

“I think our team needs to work on having more urgency on the court and mentally being present during the game,” said sophomore Jules Tan.

The Scots are scheduled to take on the Burlingame Panthers this Thursday, looking to brush up a few errors in the mean time.