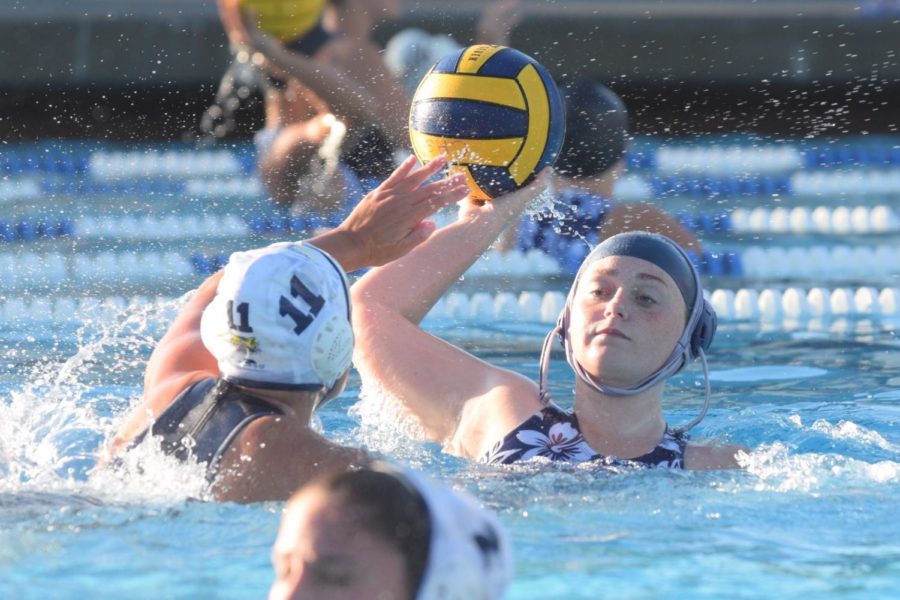 Samantha Day looks for open players to pass the ball to during the third quarter.

Notre Dame’s quick offense led them to a 10-4 victory. The Scots had previously won their game against Half Moon Bay on Monday. Running off of Monday’s momentum, the team was determined to maintain their winning streak, especially since Notre Dame beat them last year.

The first quarter started with Notre Dame winning the sprint. The sprinter then passed to Nicolette Bolich, a Norte Dame senior, who drove the ball down to the goal. Bolich took a shot and scored a goal within the first 20 seconds of the quarter.

With Carlmont in possession of the ball, Marina Ferme then passed to Ilyana Zlobinsky. Carlmont continued to make quick clean passes. However, when they attempted to shoot, Notre Dame’s goalie swiftly blocked the ball.

Things quickly went downhill for Carlmont during the second quarter. Notre Dame managed to score three more goals in less than two minutes. They made quick passes that the Scots attempted to intercept with no luck.  The Scots were able to score a point when sophomore Jessica Conley took a shot and scored a goal five minutes into the quarter.

During the third quarter, Zlobinsky was able to shoot into the top right corner of the goal, surpassing the goalie’s reach. Although Notre Dame was leading 8-3, they also had three players ejected.

Emily Livesay, a Carlmont junior, said, “We were put off by the fact that Notre Dame was a lot more aggressive than we anticipated. They were dirty players, and we just weren’t ready for that. So I think that distracted us … But I think we did a very good job of sticking to our players, calling for names, and working together as a group.”

During the fourth quarter, Notre Dame had three more ejections due to rough play, but they still were able to score two goals. Despite the large deficit, Carlmont persevered and scored two more goals.

In the end, Carlmont lost 10-4. As the Scots accepted defeat, Conley, as well as the rest of her team, realized that they should’ve focused on the game more.

Bolich was impressed by Carlmont’s sprints but ultimately thought that her team won due to good cooperative teamwork.

Bolich said, “I think my team won because we played as a team. We all worked well together, and we made sure that we were passing and looking for open people. Knowing that we can all work together really well is what makes us win.”