Girls Who Code Club builds a legacy at Carlmont 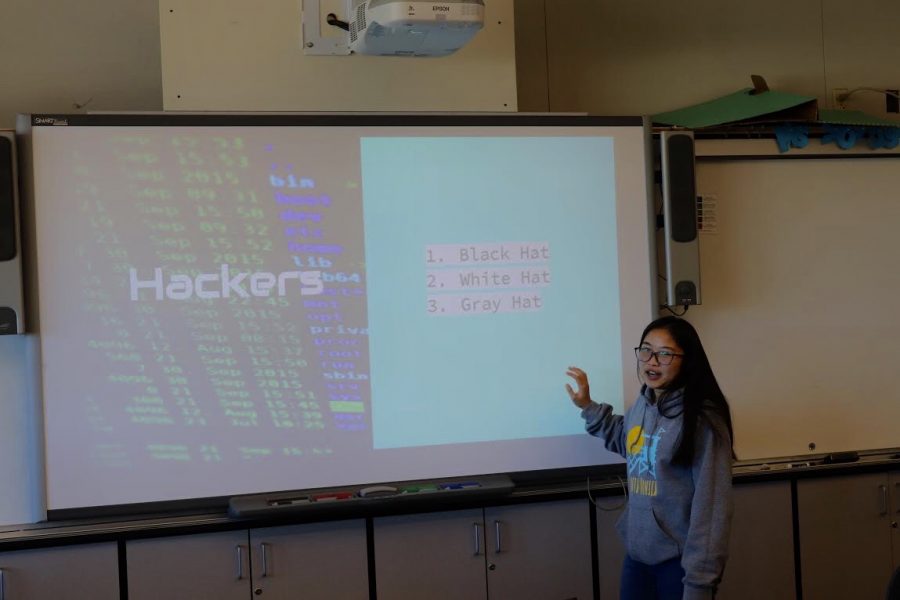 Club Vice President Morgan Yee gives a presentation on the different types of hackers in coding.

Starting a club is challenging to begin with, but maintaining the stability of the club and leaving a legacy can be even more difficult. The Girls Who Code Club is one of many working to achieve these aspirations.

When it started in 2015, the club had around 10 members who could only meet after school to practice coding on a program called Scratch.

Today, the evergrowing club has more than 20 members who meet both during lunch on Thursdays and after school on a weekly basis.

No longer limited to learning solely through Scratch, a typical meeting in D24 consists of guest speakers, presentations on women in technology, summer coding activities, and TED Talks as well as open labs after school for members to work on their coding curriculum.

Although the club has seen many changes throughout the years, the goals of the club have remained the same.

Shiina Sugiuka, a senior and one of the vice presidents of the club, said, “Girls Who Code is a place where we encourage girls to try to step into the male-dominated fields, step out of their comfort zones, and learn how to code.”

These changes were set into motion by President Jessica Yu, a senior. When she was just a member of the club, she felt as though she hadn’t learned something new after every meeting, which was important to her.

As the current president, Yu feels she has accomplished her goal of letting members learning something new each meeting through the various activities that the club provides.

Despite doubling the size of the club and adding multiple new activities, the club isn’t done expanding.

“In the future, Girls Who Code Club wants to continue on building the sisterhood and providing the resources for students learning how to code,” Yu said.

However, the multitude of goals that the leaders of the club strive to achieve come with one problem; they’re all seniors.

But who will they be?

Throughout the year, the club leaders pay close attention to the members who show undeniable dedication to the club. In turn, such members tend to run for office, one of them being Katelyn Gambarin, a sophomore running for club president.

“I want to run for president because I want to show other girls that computer science isn’t all that scary … I could get more girls interested in computer science, which would be amazing,” Gambarin said.

Her commitment to the club, as well as that of other potential candidates, leaves the current president and vice presidents of the club with little to worry about regarding the future success of the club.

“I hope that even after we graduate, even after we’re long gone, the club was able to help people find new friends and find new hobbies,” Sugiuka said.