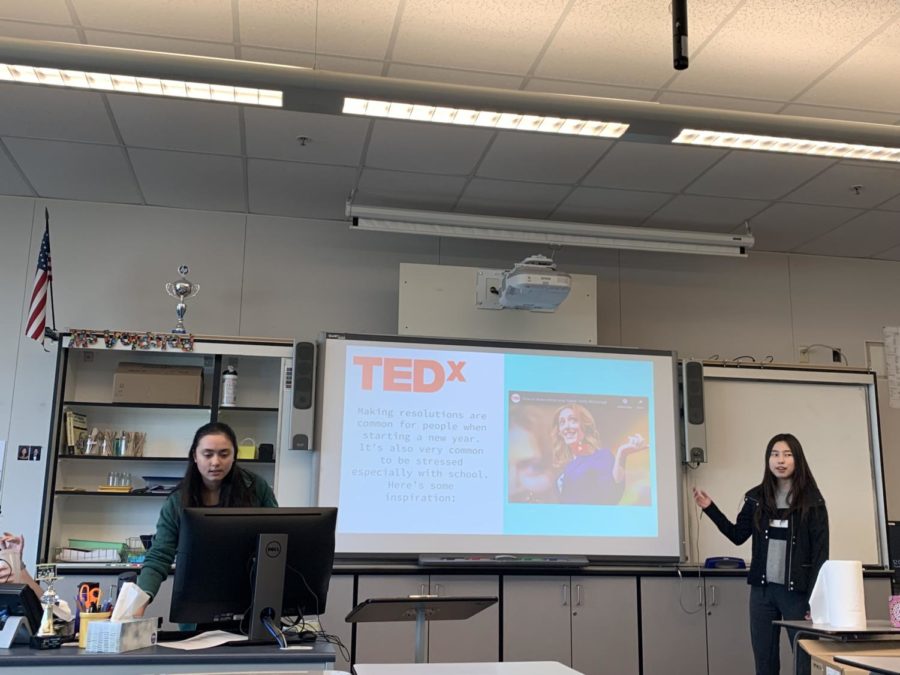 Girls Who Code Club start their first meeting of the semester with a TED talk.

When thinking of computer science or coding, it is usually thought of as a male-dominated field.

This is because women currently hold only 24 percent of the jobs in computing, which leaves the remainder 76 percent to men.

However, there are more opportunities for women to access coding jobs; it is just a matter of creating more interest in the subject.

Girls Who Code Club at Carlmont High School strives to raise more awareness in this topic among the girls in school. There are around 20 people who come to the meetings.

Lily Gittoes, a junior and vice president of the club, tries to get more girls involved with tech.

“At our meetings, we play a lot of videos about various women in tech to hopefully inspire our members,” Gittoes said. “We play a lot of videos on women in tech, including Simone Giertz, Miral Kotb, and others. Hearing their stories and discussing key takeaways is an integral part of our lunch meetings. Girls Who Code also has a coding curriculum that our members have access to so they are able to start learning how to code.”

Some students feel as if the spark of interest in this field started from a younger age. Other girls started their coding experience with their parents.

“I began coding right before starting middle school in Scratch and then taught myself Python with a little bit of help from my dad,” said Cassie Areff, a sophomore and club member. “Since then, I have taken two college Java courses.”

Coding opportunities for girls are also available with Girls Who Code, a free nationwide program for girls to learn programming in camps. Another option is Kode with Klossy, lead by Karlie Kloss, a model who helps girls create apps using coding methods.

Karen Voldstad, the supervisor of the club, feels as if minorities need to be more involved in the tech field.

“I was a professional developer before I became a teacher. I was self-taught and knew a few coding languages,” Voldstad said. “I’m concerned about getting more women and minorities into coding because software is driving the world these days. If only white and Asian men do most of the development, the needs of others will be overlooked.”

Students can also take advanced and AP computer science classes. The advanced class teaches Java, and the AP class teaches Python. The AP class, however, requires a background in coding. According to Jessica Liu, a sophomore, boys outweigh girls in the AP class. However, this does not alter her confidence in learning to program.

“Sometimes, it feels like the boys’ knowledge about tech does outweigh the few girls in the class, but I usually ignore it because coding interests me,” Liu said.

Amisha Nambiar, a freshman and club member believes that confidence is a key factor in getting more girls into computer science.

“I do feel some pressure sometimes to be as good as or even better than guys,” Nambiar said. “I feel like girls have to prove themselves to guys, which shouldn’t be the case.”

Those involved in Girls Who Code believe that with their weekly Thursday meetings, they can get more girls to stick together in the tech field and support one another.

“Girls are significantly more interested in technology when they are younger, but as they grow up, they lose interest and motivation,” said Jessica Yu, a junior and the club president. “I believe this is due to tech being a male-dominated area. Girls often find themselves to be surrounded by boys in classrooms, especially in tech, resulting in a decrease in confidence. So it’s important for girls to be there for each other and to code together.”