Goat yoga at Lemos Farm is a hit 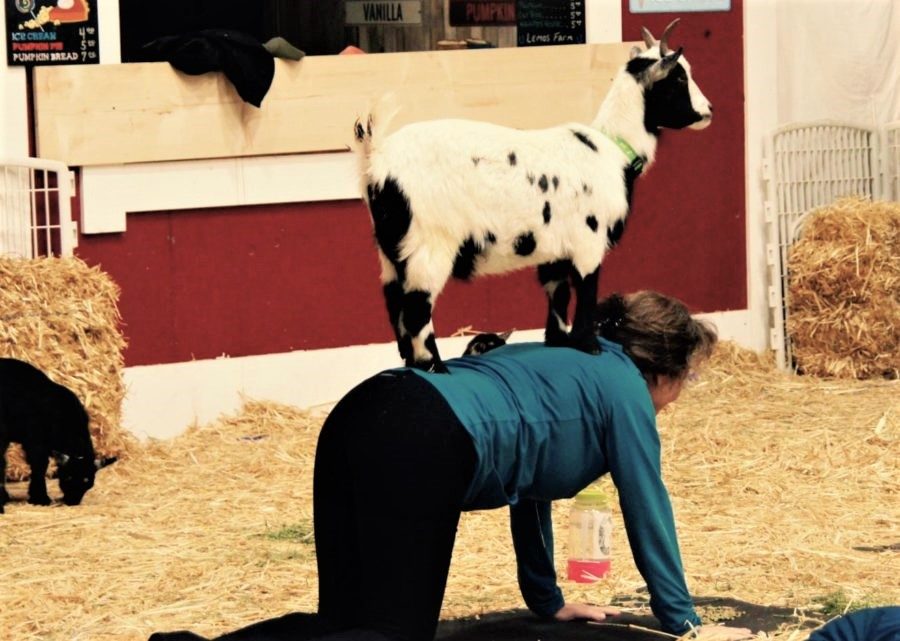 A participant does the tabletop pose while a goat is perched on her back.

Silicon Valley is a place of crazy and weird trends: insanely priced toast, fitness trackers for dogs, float pods, and DogeCoin, just to name a few. Well, another fad just got added to that list: goat yoga.

The new craze has taken over the Bay Area as a cross between two of the things people from the Silicon Valley love the most: cute baby animals and paying for unusual and Instagrammable experiences. At Lemos Family Farm in Half Moon Bay, ordinary people can live out their farmer dreams while exercising by attending goat yoga classes.

Lemos Farm has been offering goat yoga classes for almost a year.

Erica Wilburn, the goat handler at Lemos Farm, said, “My boss’s wife heard about goat yoga, and she thought it was a joke. But they looked it up on YouTube and saw that it was actually a thing. And now, ever since it started, every class has been completely sold out.”

Last Saturday, Feb. 23, 32 people gathered in one of the barns at Lemos Farm. They laid out their yoga mats on the hay-covered floor and practiced yoga while baby goats roamed around the barn.

The participants were also allowed to hold the baby goats, including two who were just 6 days old. These opportunities led to multiple Instagrammable moments.

“Goat yoga is extremely different from just a regular yoga class. Usually, yoga is a very present activity, but goat yoga is really distracting,” said Amber Ricchetti, the Lemos Farm goat yoga instructor. “Teaching this class is really similar to teaching kids yoga because everyone has such limited attention span [because of the goats].”

During class, Ricchetti strives to point out all of the different and interesting events that occur with the goats, which helps create a fun and immersive experience. For example, last Saturday, Ricchetti pointed out that a 6-day-old baby goat was feeding on its mother.

Some people enjoyed the class mainly because they could pet the goats. One of those people was Nick Kawasaki, who ended the yoga session with one of the 6-day-old goats asleep in his arms.

“[The goat yoga was] very relaxing, and I just stopped doing the yoga and just held the goats,” Kawasaki said.

The class ended with the familiar yoga greeting, “Namaste,” but translated into goat language, it was “Bahhh-maste.”

Beth Kawasaki, who was one of the participants, said, “[The goats were] totally distracting in the best possible way, and I got a pretty good stretch, but I think my face was the thing that got stretched the most [from smiling so much].”