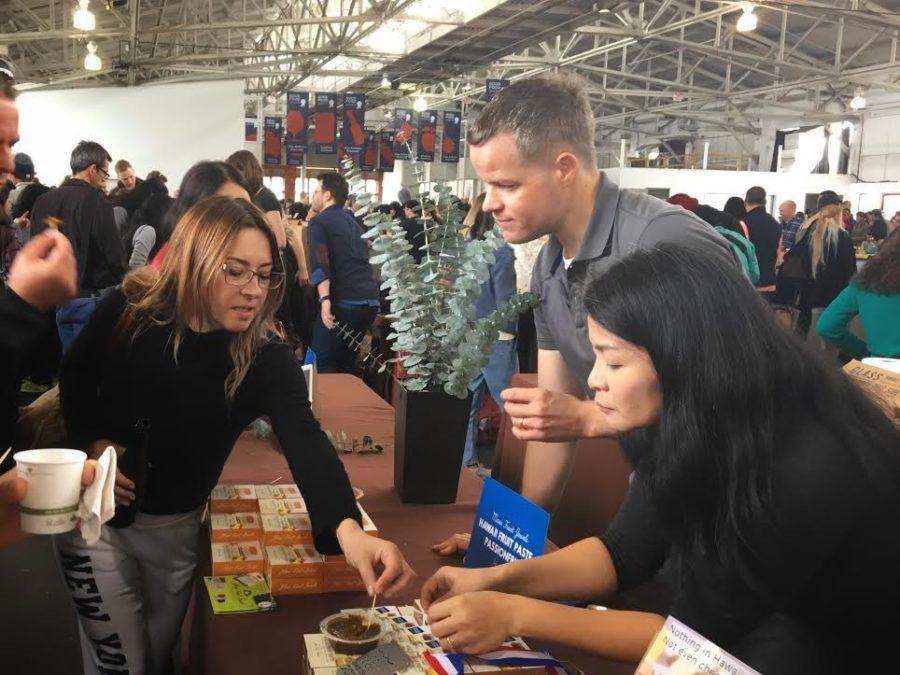 Many producers offered free samples, which gave consumers a taste of what they could buy.

The eighth annual Good Food Awards, held at Fort Mason (in San Francisco), collected a large crowd to celebrate sustainable food from around the country.

The Good Food Awards assemble American producers and judge their products based primarily on taste and sustainability. They host a series of three consecutive events each year. The Good Award Ceremony, held on Jan. 19, cost $176.25 and included an after party that called for cocktail attire. The mercantile, held on Jan. 20, cost $35 and was only open to members of the Good Food Guild. The marketplace, held on Jan. 21, cost $5 and was open to the general public.

There are 15 categories and five U.S. regions for the Good Food Awards. Entries are judged by a panel of 250, which is made up of judges from various areas of the country. The panel includes professionals as well as what their website calls “citizen tasters.”

“As consumers, we have the ability to create impact,” said Anais Radonich, a Slow Food volunteer. “If there are enough of us, small businesses will be able to support themselves.”

Sustainability and responsibility are a large part of the Good Food Awards. Every producer in the marketplace is passionate about making a positive impact on the environment.

“We always meet the farmers,” said Monica Rogan, co-owner of Goodnow Farms Chocolate. “We don’t make chocolate until we know them personally.”

The Good Food Awards exclusively celebrates small businesses. Many producers are artisanal or use their own farms to create their food.

“It’s a little strange being here,” said Ayako Iino, the owner of Yumé Boshi. “I’ve been quietly doing this for a long time, slowly growing my business, and all of a sudden everyone is interested.”

The crowds at Fort Mason were large. The two aisles taken up by the Good Food Awards were packed, and some light pushing was necessary to get from table to table. The building was also the site of a farmer’s market, which was considerably less crowded.

“There’s a lot of care that goes into these products,” said Kathleen Eder, the business director of Fran’s Chocolates. “I love when people try something of ours and it makes them happy.”