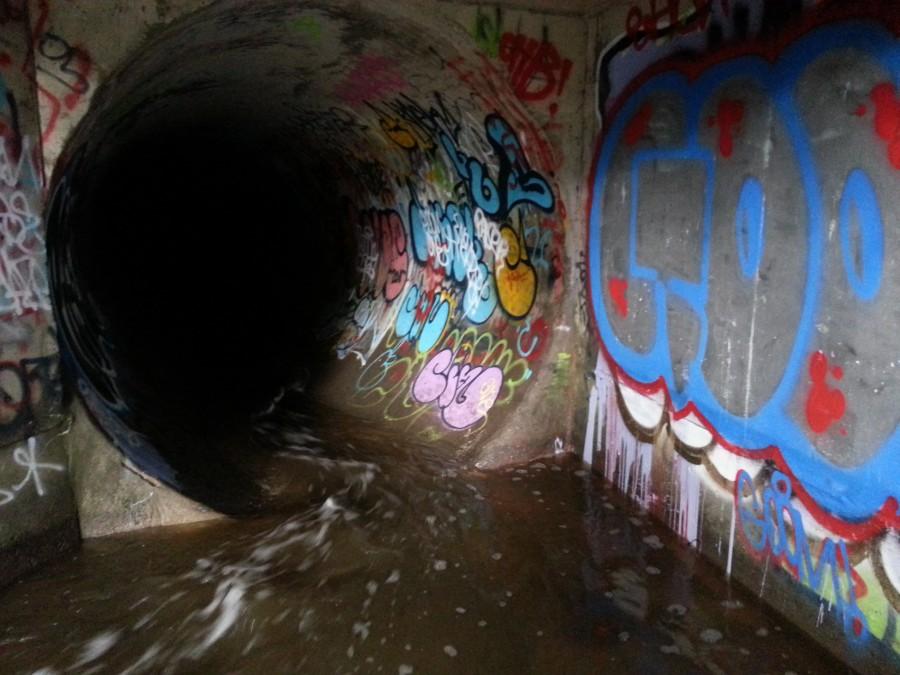 A local drainage pipe in Belmont.

While graffiti is easily recognized by its appearance, people have many different opinions about whether to label it as street art or vandalism.

Graffiti is defined by the “Oxford Dictionary” as “writing or drawings that have been scribbled,  or scratched illicitly on a wall or other surface in a public place.” While the description of graffiti as illicit does seem similar to the definition of vandalism, others argue that in some cases it can be a form of art under certain exceptions.

“You can’t just walk up to a stop sign and write your name, that isn’t art,” said junior Trisha Nunez.

Some argue that to be considered art, both location of the graffiti and the creative thought demonstrated contribute to whether or not it should be considered a form of art or vandalism.

“If it is in a place that isn’t disruptive or isn’t covering or ruining something then it is more art,” said Carlmont visual arts teacher Cynthia Hodges.

“I find it [graffiti] to be vandalism because it is often done on the property of others. The recipient of the graffiti may not appreciate what is done and may have to take lots of time and effort into erasing the damage. It is wrong to write or draw over another’s property without his or her permission,” said Brian Lee.

On Sept. 18, Fox Elementary School in Belmont was sprayed heavily with graffiti just after the school was remodeled during the summer. The school district was forced to pay for the cleanup process of removing the graffiti from the campus. In cases like this, graffiti can be called disruptive and therefore would more likely be classified as vandalism rather than art.

However, there are more secluded places within San Francisco where graffiti is more welcomed. Clarion Alley within San Francisco’s Mission District is known in a positive way for being covered in graffiti, with new illustrations being added frequently. The alley is considered a hidden gem, with tourists flocking there to look at the drawings painted by graffiti artists.

“It represents a lack of control,” said sophomore Matthew Trost.

In some cases, graffiti can be profane and inappropriate leading to a threatening atmosphere that is associated with crime. Graffiti is also known to be used by gangs in order to mark boundaries and territories.

“There has to be some sort of creative motive behind it, it can’t just be scribbling,” said junior Tiffany Nunez.

Some believe that graffiti can be a creative expression of one’s thoughts and ideas. While presenting a message in a public area, artists can convey their feelings about certain subjects to a broader audience. Some graffiti art can carry messages criticizing social or political aspects of life. Other graffiti murals can used as a form of memorial or a way of brightening an area if the drawing has a positive meaning.

In essence, while factors such as content and location influence the labeling of a graffiti piece, art is truly in the eye of the beholder and it is up to one’s own personal tastes to decide whether graffiti is street art or vandalism.