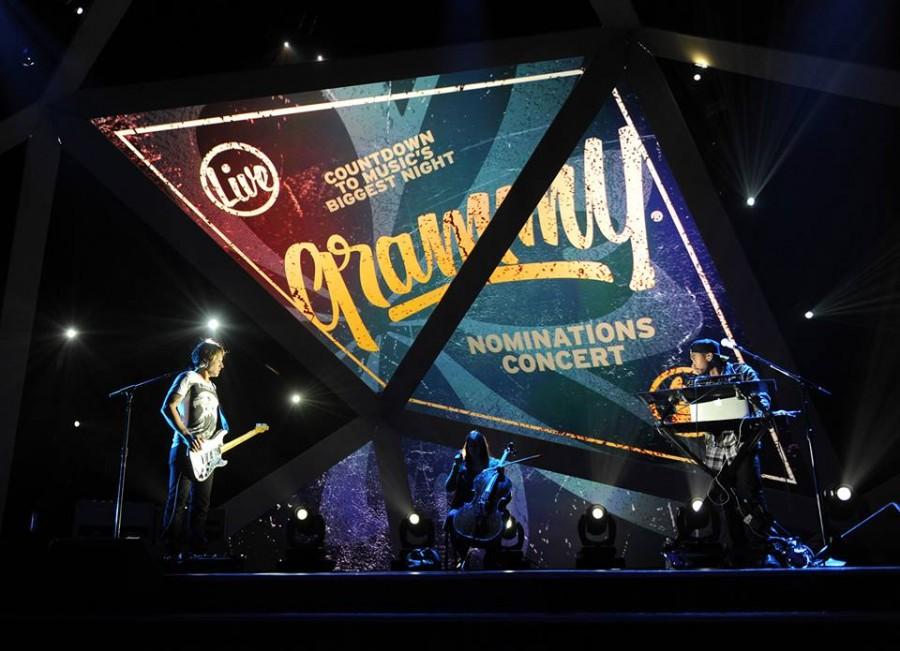 Keith Urban and Miguel performing together at the Grammy Nominations.

With incredible guests and performances throughout, the Grammy Nominations set the scene for the Grammys airing in 2014.

The Grammy Nominations have been a tradition for numerous years now, making people wait in anticipation for their favorite artists to be announced for the ultimate music award.

Nominees such as Macklemore and Ryan Lewis, Rihanna, Imagine Dragons, Kendrick Lamar, Lorde, Daft Punk, Ed Sheeran, and many more offered a wide variety to the types of genres being represented at the show.

Performances by artists including Miguel and Keith Urban, Macklemore and Lewis, Katy Perry, and others introduced interesting segments to the show that drew in many different audiences.

Macklemore and Lewis started off the show with “Thrift Shop,” setting the fun, and exciting night ahead for the artists nominated for the Grammys.

The night proceeded to air prerecorded performances by Perry and Taylor Swift who were both performing their own concerts, unable to attend the show.

Lorde showed her unique side when performing her hit single “Royals,” while Urban and Miguel offered an unusual duo, combining country and R&B music.

“I think Lorde’s performance really brought bare talent to the Grammy Nominations stage because of the simplicity of her arrangement of ‘Royals.’ I also thought Keith Urban and Miguel showed us how two very different genres can work well with each other,” commented senior Michaela Haake.

Containing over 80 categories, the Grammys is set out to be a very special night for hundreds of artists, all hoping to bring home such an honorable award.

While the Grammys marks importance to many, the nominations night seems to be overlooked by many viewers.

Junior Victoria Poslavsky said, “I don’t think they need to have a whole separate night for the Grammy Nominations because there’s not much excitement revolved around it. No winners are announced, making it boring and not very important.”

Junior Brian Palma commented, “I think the Grammy Nominations this year was a lot more interesting than past years since there were some great performances. The diversity inclined me to watch the show.”

Although the nomination night seems to only hold importance for certain music lovers, it’s turning into a show worth watching since the performances are becoming more interesting and relevant.