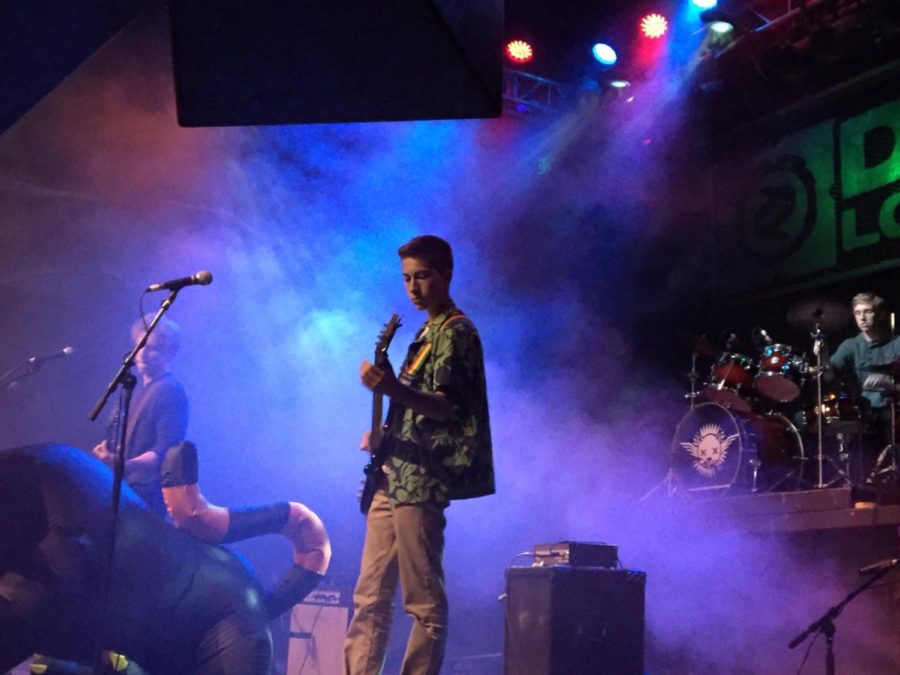 The lights shine down on the center of the stage.

The audience waits as the band makes their final adjustments.

With the first note played, the show begins. But this isn’t a big-time band, it’s a trio of high school students.

Grandma’s Cat came together in 2016 at the local swing dance competition of Central and Tierra Linda Middle Schools.

“When Alexander and I were in eighth grade, we were both in our schools’ jazz bands [Tierra Linda and Central], and we met at a swing dance competition,” Posten, the band’s vocalist and guitarist, said. “We started talking, and I asked him if he wanted to jam sometime.”

After Hauer-Molero and Posten got to know each other for a while, Seaman was asked to join the band.

“Reese texted me, asking if I wanted to play with them,” Seaman, the drummer, said. “I said yes right away because I had wanted to be in a band for a while.”

After Seaman was recruited, the band was complete.

Posten came up with the band’s name, Grandma’s Cat.

“My grandma has this cat who is probably the meanest cat you’ll ever meet and has always been terrifying,” Posten said. “I was talking with my mom about band names, and I wanted to do something funny like a death-metal band name, so I was thinking of the scariest thing I could think of, and the first thing that came to mind was Grandma’s Cat.”

As the group continued to rehearse and share opinions on the music they were practicing, Posten presented his own original songs to Hauer-Molero and Seaman.

The group then started to produce and perform the original content; Posten creates the song and structure, and Hauer-Molero and Seaman create their own bass and drum parts.

“Most of our inspiration comes from bands like Green Day, Foo Fighters, Muse, and Red Hot Chili Peppers,” Posten said. “We eventually developed our own style, which still fits in the alternative rock genre. Most of the songs that I write come from something that happened in my life, and I usually use it as a way to say everything on my mind.”

“’Saltwater Sand and Sexwax’ is my favorite original song because it was the first song we wrote together as a band,” Seaman said. “It changed a lot since the first time Reese showed us the riff, and we all contributed new ideas to it.”

The band’s first ever performance on stage was at the San Carlos Hometown Days in the spring of 2016 where the band had little to no audience. Since that performance, Greg Posten, the Band Manager and Reese Posten’s father, aimed to attract more eyes and ears to the band.

“The first step for the band to gain popularity was to develop their online presence as that really is how bands need to connect with their audience,” said Greg Posten. “They currently have a website, Facebook page, Instagram, and CD Baby pages.”

The band gained more exposure and connections through live performances at local events as well.

When Grandma’s Cat performed at the Half Moon Bay Pumpkin Festival, they met the band Get Out. The members of Get Out introduced Grandma’s Cat to promoters that book artist showcases in San Francisco.

The promoters booked an upstairs gig for Grandma’s Cat at the DNA Lounge in San Francisco, a nightclub for all ages.

“Our show at the DNA Lounge is my favorite so far,” Seaman said. “It was cool to play on a bigger stage. There were a few hundred people there, and we performed on the same stage that Prince, Green Day, and Metallica once performed on.”

Their show at the DNA Lounge also showed what it takes for a band to host a showcase.

“The way showcases work is the more tickets you sell, the better the time slot you are given and the more likely you are to be asked to play again. The guys sold a good number of tickets to friends, family, neighbors, and so on. They wound up with a really good middle-of-the-show spot,” Greg Posten said.

Since their performance at the DNA Lounge, the band gained recognition from other promoters and now have a wider variety of booking venues.

“They’ve since been asked to play many times by a couple of different promoters in venues ranging from coffee shops to the main downstairs stage at the DNA Lounge,” Greg Posten said. “At each show, they sell t-shirts and stickers to further their exposure and get people to follow them on social media.”

Grandma’s Cat also released their first EP, “Among Other Things,” and are planning on recording six more songs in the studio in January to complete their first full album. An EP is an extended track of music that has more music on it than a single but doesn’t have enough content to be considered a full album.

All of the members of the band have other occupations and schedules that they must manage in order to continue meeting and rehearsing. Along with school, Seaman plays basketball and soccer, and Posten runs track.

Despite their extracurriculars and school work, all three find time to meet and dedicate time to their music.

“The first thing I do when I come home from school is practice guitar,” Posten said. “I always have time afterward to do my homework. Schoolwork usually doesn’t get in the way of Grandma’s Cat but balancing it can get a little difficult at times just because of the workload and the stress.”

The band hopes to engage a bigger audience through their music and performance.

“What we have all been working toward is to play music that people can enjoy listening to but also get them excited to be watching us,” Posten said. “I want to leave the audience wanting to hear more of us once we finish.”

Through the band, all three of the members have grown together in a sense where they can express their ideas and love for music freely amongst each other.

“I’ve gotten to know Reese [Posten] and Alexander [Hauer-Molero] really well, and it helps us stay connected even though we all go to different schools,” Seaman said. “We all like similar kinds of music, and it’s really fun to play a genre of music that’s not as popular as it used to be with other people who really appreciate it.”