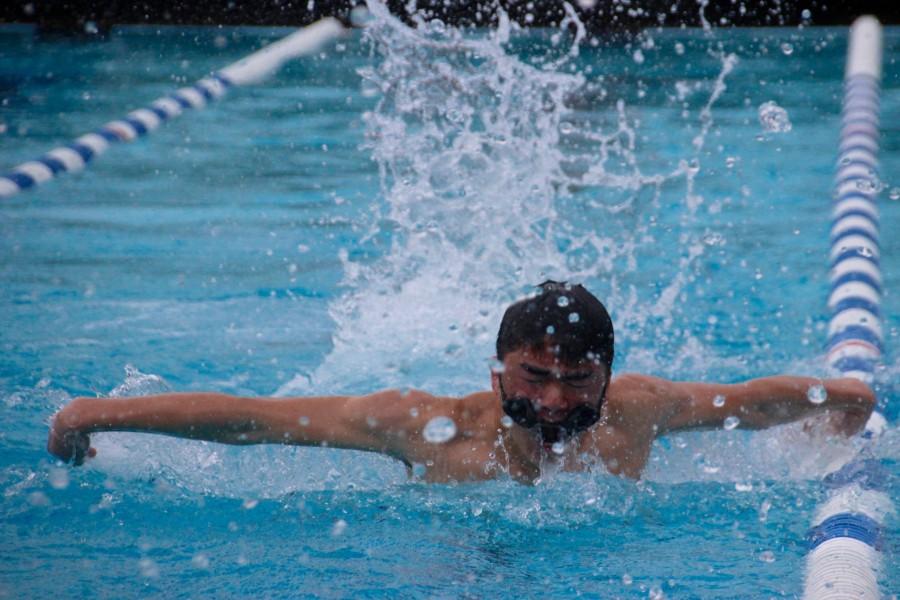 Freshman Nathaniel Pon veers into the lane line as he struggles to swim with his goggles slipping off.

Water splashes into the air, and students shout encouragements from the deck.

The annual pre-season, inter-squad Blue-Gray swim meet was Thursday, March 3.  Carlmont swim team broke into two teams, the Blue Team and the Gray Team, sparking a friendly competition. Teams made shirts and stood by the pool edge cheering their team mates on.

Throughout the meet, the lead bounced back and forth between the two teams. At one point, Gray Team swimmer Alexander Chan, a senior, lost to Blue Team swimmer Cameron Ho, a sophomore, on the count that he didn’t touch the touchpad. Chan had swam too low and had touched wall under the touchpad.

Going into the final event of the meet, the Gray Team was leading 385 points to 376. In the end, Gray Team won by four points, 389 to 385. Gray Team erupted in cheers. This was the first Gray victory in around five or six years, according to junior varsity coach Jim Kelly.

Sophomore Alyssa Fong said, “The Blue-Gray meet is a spirit meet. It is a great way to kick off the season. It is very team oriented and helps unify the team.”

As a fun spirit meet, the Blue-Gray meet also had a couple joke events including a 100 kick relay and a 25 underwater on your back. Though the Blue-Gray meet was less focused on competition than an actual meet, it showed freshmen and some sophomores what a swim meet is like and gets them into the competitive mode.

For freshman Rebecca Jiang, the Blue-Gray meet was her first swim meet. Jiang said, “This is a new environment for me. Seeing as this isn’t a real meet and it doesn’t count, it is more about the team and there is a lot less pressure. I love being on the team and forming bonds with my team mates; it is super exciting.”

For others, though competition and swim meets are not new, swimming for school is a new experience.

Varsity swimmer Nicole Turk, a freshman, said, “Compared to swimming on a club, swimming for a school team has been really fun. The overall atmosphere is much nicer; it’s a closer knit team and everyone is happy and encouraging.”