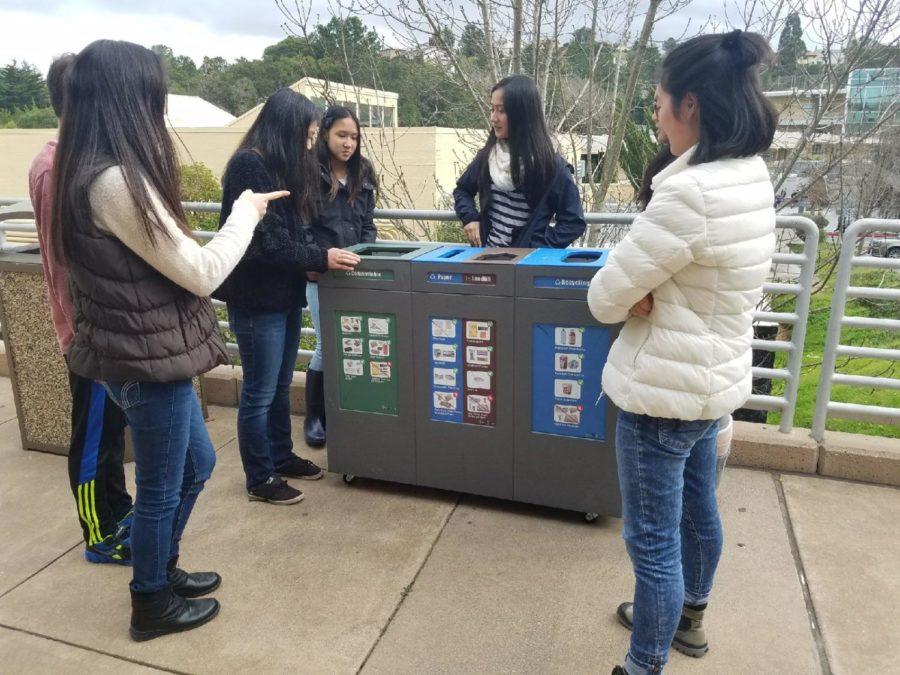 The Green Team stands outside during one of their meetings and discusses the tri-bin system.

With the implementation of a tri-bin system of compost, recycling, and landfill at Carlmont, the Green Team has been able to raise environmental awareness in the community.

So far, the tri-bins have been a major success but the team needs to keep working to maintain that system. At this point, the club still has some issues with the tri-bins that they are currently trying to resolve.

Risako Nozaki, the club’s vice president, said: “One of the major problems with the tri-bin system is the shortage of signs. People are still confused as to where to put their waste.”

Although implementing the tri-bins was a major step towards a greener campus, the Green Team plans to put even more emphasis on environmental issues by campaigning for zero waste and reusable containers.

Nozaki said, “In the future, we will try to make school more zero waste and put increased emphasis on students taking eco-friendly actions.”

In order to gain popularity among the students, the club and its members are trying to reach out to the school community by doing various challenges and activities.

Kristin Ma, a senior and vice president, said, “We do a lot of school-wide activities involving third period classes. Recently, we did a reusable water bottle challenge and showed a video, in class to show people how to sort their waste, as well as a Kahoot! game and various posters.”

The club plans on organizing Green Week, which was a campaign that they started last year.

“During Green Week, [The Green Team] has various activities, such as a pledge tree where students would be able to write their eco-friendly actions,” Nozaki said.

The members are passionate about the issues the club is trying to address everyday.

Jenny Mao, a sophomore and club member, said: “I was genuinely interested in the environment and wanted to help the campus become more green, so I joined the club.”

During their weekly meetings, the club discusses current issues and future projects.

Ma said, “During the club meetings, we usually talk about the updates. Recently we’ve been talking a lot about the tri-bins.”

The Green Team is one of the activity-based clubs at Carlmont, meaning that it requires the involvement of many people in order to complete projects.

Emna Sellami, a sophomore and club member, said: “In the future, the club having more people would be good since they can help us to expand our ideas and allow for more volunteers at our events.”

The Green Team strives to make the campus greener, whether that means implementing the tri-bin system or holding environmental campaigns.

The Green Team meets every Wednesday during lunch in E1.