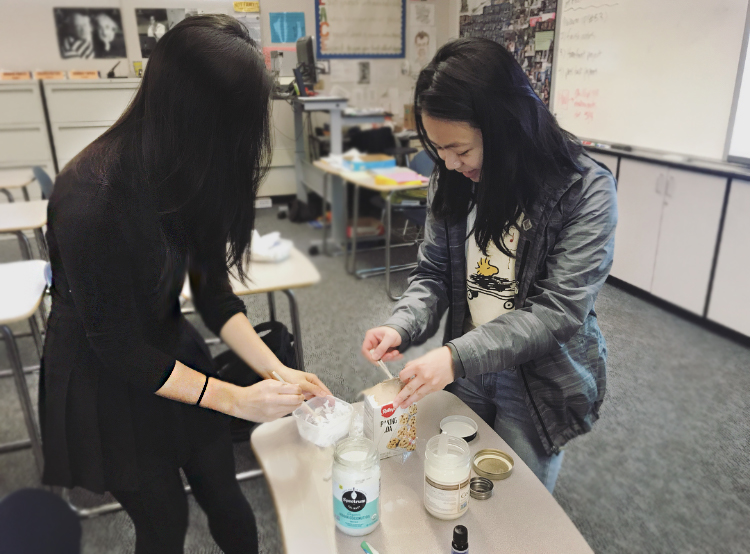 According to the 2017 Infrastructure Report Card, Americans produce 258 million tons of waste annually.

The Green Team Club at Carlmont is working to reduce this amount with their new zero waste initiative.

“The Green Team strives to promote zero waste, but most importantly, spread awareness of the environmental issues that arise out of our trash bins and how essential it is to sort trash,” said Serena Low, a junior.

At the Feb. 27 meeting, the club set up an activity inspired by zero waste activists such as Bea Johnson and Lauren Singer. They made DIY toothpaste to promote using reusable containers and natural ingredients. Club members were expected to bring in reusable jars to make the toothpaste out of coconut oil, baking soda, and peppermint essential oil.

“A couple of weeks ago, Kat Nguyen presented on the subject of zero waste and mentioned prominent zero waste figures on social media: Béa Johnson and Lauren Singer. I was inspired by Singer’s impressive ability to live completely zero waste and produce only a mason jar of non-compostable, non-recyclable trash over a span of four years. She shares her tips and tricks on her blog, ‘Trash is for Tossers’, where we found the recipe for homemade toothpaste. Her practices, along with the practices of several environmental activists worldwide, demonstrate that it’s possible for anyone to easily make changes to their everyday lives to make living itself eco-friendly,” Low said.

Nguyen, secretary for the club, discovered the zero waste movement while looking at videos on YouTube, and decided to present her project in a meeting.

“I presented about the zero waste movement because I think it’s important for people to become more conscious about the amount of waste they are producing and find out ways that they can downsize on it,” Nguyen said.

Green Team has started other environmentally-friendly projects in the past, such as the tri-bin system at Carlmont. They have continued working on the project, teaching others about the system and giving updates.

“So a while ago, we were having these meetings with admin because someone from Recology was coming and doing a trash audit of our school. Since we had been involved in setting up tri-bins and composting, we were helping them Recology people understand how our system was run and give some estimates regarding our composting numbers,” said Jenny Mao, vice president of the club.

They also set up a hydroponics program over the summer at the Carlmont garden and the Belmont Library community garden. Hydroponics is a method for growing plants without the use of soil. Instead, they growing them directly in the water.

“We’ve had a few different hydroponic systems. The simplest one is lettuce, where you just put plants in styrofoam in the water and let them grow. We set up these plants at the Carlmont garden as well as at the Belmont library community garden. It’s useful for growing a lot more food in less land. This method will grow increasingly useful because we are running out of resources for everyone on the planet to be able to support themselves,” Mao said.

Green Team also has many plans for the future, including the expansion of the zero waste initiative.

“We’re definitely looking into expanding the zero waste project. I think we could do a reusable straw movement at school, which has been increasingly popular recently and also maybe try some zero waste challenges for the members with rewards,” Mao said.

The club is also looking to start a campaign on Earth Week, an expansion of Earth Day celebrations. They hope to use the heightened awareness for environmentalism to teach people to conserve energy and reduce waste.

“It would be like Spirit Week, with posters announcing each type of day. We hope people will follow by example, but things like turning off the lights at school, we can control directly,” said Alyssa Nguyen, the club president.

Overall, the Green Team wants to reduce the amount of waste in the world and promote environmentalism, in order to protect the planet and the people in it.

“Every extra thought and consideration towards the environment is a step towards decreasing CO2 emissions, increasing public awareness and promoting the idea of the conscious consumer,” Low said.