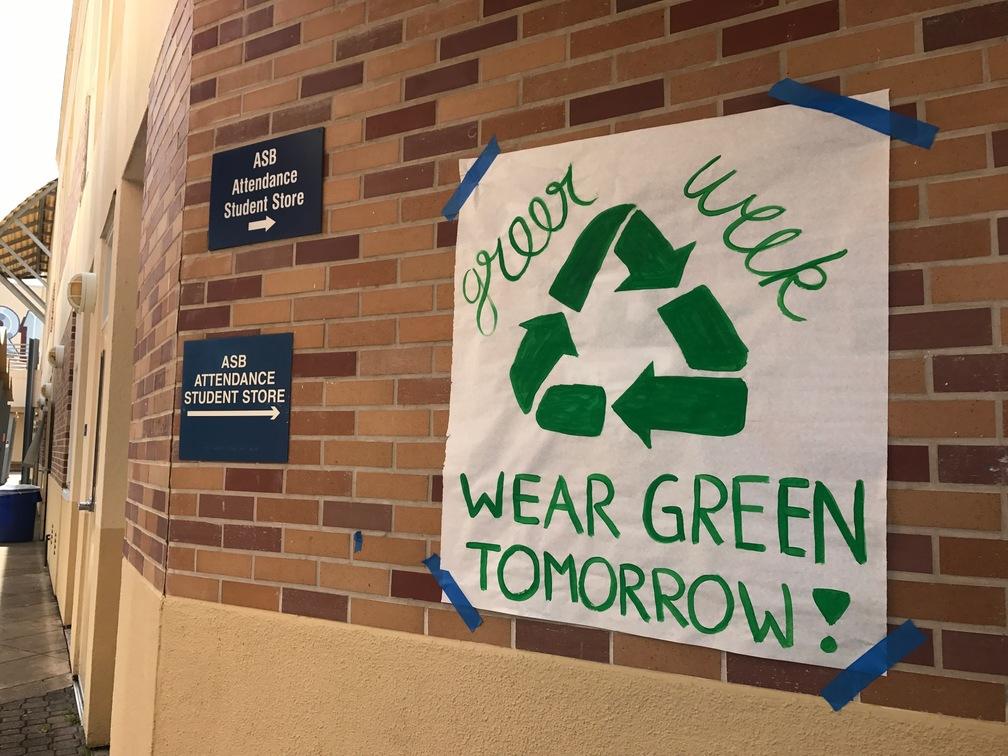 Students participating in the planning and execution of Green Week, which took place from April 24-April 26, hung posters around Carlmont, encouraging students to "go green."

After about three months of collaborative planning between LEAP Club and Environmental Club, Green Week took place the week of April 24.

Hanna Francis, a senior and president of Leaders for Environmental Awareness and Protection (LEAP) Club, described Green Week as “a fun collaboration between clubs in an attempt to make our school have a more environmentally-friendly atmosphere.”

The planning for Green Week began as a simple Google document full of ideas about how to put on an event to spread environmental awareness and acceptance through the Carlmont student body and to celebrate Earth Day (which occurred on Saturday, April 22).

In the weeks leading up to the event, the students spent many hours after school figuring out logistics, publicizing, and preparing for the event.

Kristin Ma, a junior and vice president of the Environmental Club said, “In order to make Green Week a reality, we had to communicate with many different groups like the Plant Manager, teachers, and ASB to assist us with carrying out our events.”

While the block schedule and the distraction of prom preparation made it difficult to find time, volunteers hung up posters and flyers publicizing the event and encouraging students to wear green and florals in recognition of Green Week.

Before they knew it, Green Week had arrived, and the members of LEAP and Environmental Club were ready for their activities to commence.

The main events of Green Week included promoting recycling, conserving energy by turning off lights, and other environmentally-conscious behaviors that could be adopted by the students of Carlmont. Along with the green and florals spirit day outfits, there was a green pledge station (at which students could pledge their allegiance to environmentally-conscious practices), green ribbons and globe keychains being handed out, and a class-survey of reusable water bottle usage. The group also turned off the lights in the hallway to publicize energy conservation.

Sophomore Eva Peate said, “I went to do the green pledge; it was a really cute and simple way to get involved with the activities that were put on. I could see the hard work they had done through all of the posters and chalk around school, and I think it was a good message for the students of Carlmont to receive.”

Many students participated in the green pledge by writing down on a paper leaf an environmentally-friendly pledge and pinning it to a tree in the upper quad for all to witness and be inspired by.

Ma concluded, “I would like students to take away from Greek Week that it only takes the simplest things that require little to no effort to make an impact on the environment.”