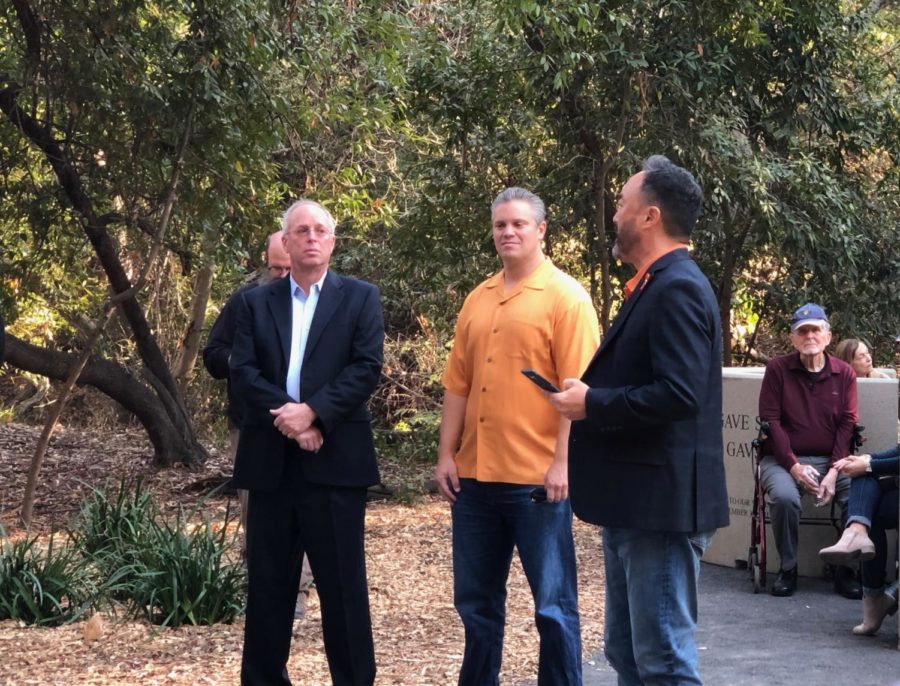 Former Mayor and Councilman Eric Reed may have passed away in 2017, but his memory appears indelible.

A grove adjacent to the Veterans’ Memorial in Twin Pines Park in Belmont was dedicated Sunday afternoon to the memory of Reed, who died last December after a three-year battle with cancer.

Reed, inspired by the sacrifices made by Belmont residents over the years in service of their country, proposed the Veterans’ Memorial in 2016 and saw it to completion a year later with the aid of a committee of Belmont residents. Now, approximately two years after Reed proposed the project, just under one year after his death, and on what would have been his 51st birthday, the area around the memorial has been named in recognition of his efforts to champion the Veterans’ Memorial and in celebration of his service to the City of Belmont.

“A year ago today, Eric was with us to commemorate the Veterans’ Memorial, which was his way of showing respect for our veterans,” said Belmont Mayor Douglas Kim. “A year later, we’re here to show our respect for Eric, commemorate his accomplishments, and say thank you for his service to the City of Belmont.”

Vice Mayor Davina Hurt and Councilmen Charles Stone and Warren Lieberman also delivered remarks at the dedication, as did Reed’s mother, Loverine Taylor. All spoke in mutual admiration of Reed’s longstanding and far-reaching commitment to Belmont, borne out by his tenures on the Planning Commission and the City Council as well as his term as Mayor in 2016.

“Eric had a need and a desire to give back. And you, the people of Belmont, made that possible,” Taylor said. “This place is so beautiful. I’ll think of him anytime I come here.”

Several community leaders were in attendance at the dedication, including four members of the City Council, City Clerk Terri Cook, City Treasurer John Violet, City Manager Greg Scoles, Reverend Michael Arase-Barham of Good Shepherd Episcopal Church, and Poet Laureate Jacki Rigoni, who read a poem written in Reed’s honor. Also attending the Sunday event were several other members of city staff and the leaders of various civic organizations — likely a testament to the high level of respect Reed’s service earned from his community.

“[Reed] has done so much for this community, and we owe him a lot of gratitude for all the work he did until the very end,” Hurt said.

Following Taylor’s remarks, members of the City Council unveiled a plaque recognizing his service on the Planning Commission, the City Council, and as Mayor. Also etched on the plaque is a quote and a note of gratitude for his “life and service to the City of Belmont.” The plaque sits to the right of the path to the Veterans’ Memorial and at the foot of the Eric Reed Grove.

“I feel incredibly blessed that this community has embraced us,” said Eric’s wife, Laura Tower Reed. “It was a labor of love that built [the Veterans’ Memorial]. The fact that the grove has been named in his memory is everything.”

According to Belmont Parks and Recreation Director Brigitte Shearer, who was in attendance at the dedication, the parks department added new mulch to the grove and planted new vegetation, including five trees and several orange flowers — Eric’s favorite color. Parks staff also chose the stone for the memorial plaque and upgraded the grove’s irrigation system.

“As the guys were working on this over the last couple of days, they really noticed that, now that the older trees have fallen, the light just comes through here in a really beautiful way throughout the day,” Shearer said.

All spoke in tones of shared admiration of Reed’s dedication to the city and his extensive record of successful community engagement. During his time on the council, Reed was a major force behind the adoption of the Belmont Village Specific Plan, an enormous commercial zoning overhaul which may one day pave the way for a substantive Downtown Belmont. He also played a major role in the completion of Davey Glen Park.

“If there’s one thing we can all remember and reflect on, it’s that Eric, as much as anyone and more than most of us, was really a unifier and someone who wanted to bring the community together,” said Lieberman. “And I know of no higher virtue than doing something like that.”