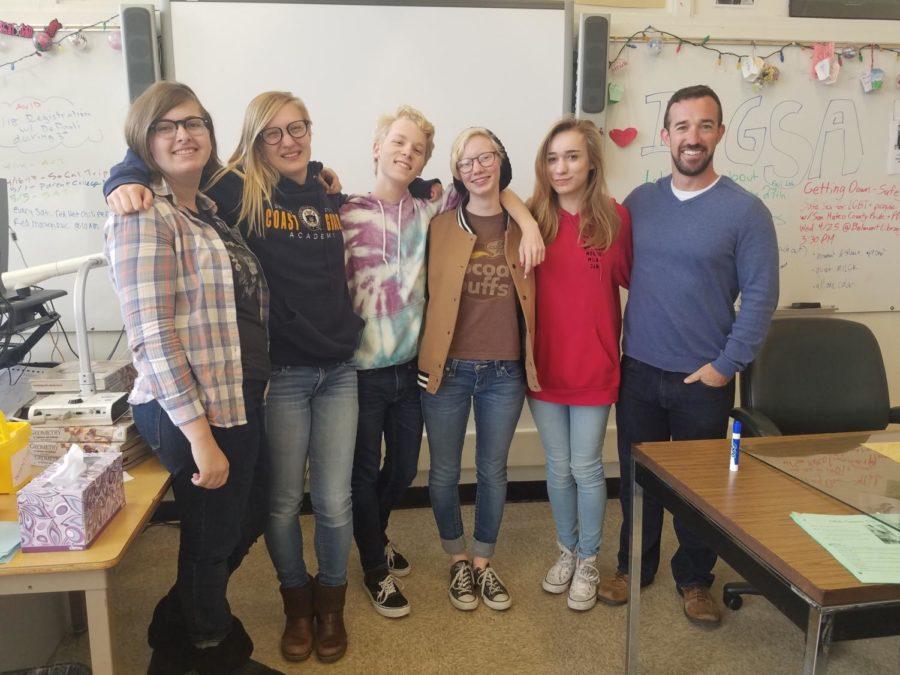 The GSA Club after their latest meeting where they discussed the events of the Day of Silence that would take place on May 7, 2018

Day of Silence is an annual event during which high school students choose to not speak throughout the duration of the day in order to address the issue that queer teens are often silenced when it comes to their social concerns.

Carlmont and its students will take part in the event, just as they have in the past years, but with a little twist on it.

The Genders and Sexualities Alliance (GSA) Club, which strives to address any concerns that queer teens might face, came together during one of their past meetings to discuss what can be done differently this year.

According to Oliver Golden, a senior and the president of the club, “In the past, we have put up posters and used announcements to make people aware that the event is happening.”

The GSA Club decided to dedicate one of their meetings to discuss events that will take place on the Day of Silence at Carlmont.

“Some people think that being silent for a day is not a very good idea to address this particular issue,” said Oliver Golden, a senior and president of the GSA club. “It sounds somewhat counterintuitive to be silent to address the fact that many queer teens are silenced or decide to stay silent when it comes to talking about their gender.”

During their meeting, students decided to brainstorm what they could do differently for such an event. Towards the end of the meeting, the students agreed that it would be a good idea to have all the people participating wear a name sticker that would say “Ask me about the Day of Silence”.

The students believe that such an action would make people more aware of the purpose of the event and the issues that queer teens have to face from day-to-day.

“The Day of Silence really creates a sense of community,” said Elysia Wright, a senior. “It is easier to trust people that participate because they create a sense of mutual support for others.”

The students from GSA Club believe that it is extremely important to create a sense of supportive community within the school to make sure that no one feels attacked or harassed.

“We should take part in the Day of Silence to spread awareness about bullying and harassment that queer youth face at school in order to prevent any incidents of hate,” said Wright. “I have not experienced such harassment first-hand but I have heard, walking around the school, that students still use ‘gay’ as an insult.”

The GSA Club and its members strive to raise awareness about the neglect of queer culture that could sometimes happen on an everyday basis by making sure to include as many students in the events of the Day of Silence as possible.

“I am very proud of them,” said Andrew Ramroth, a teacher at Carlmont. “They are speaking up for themselves and for other students.”