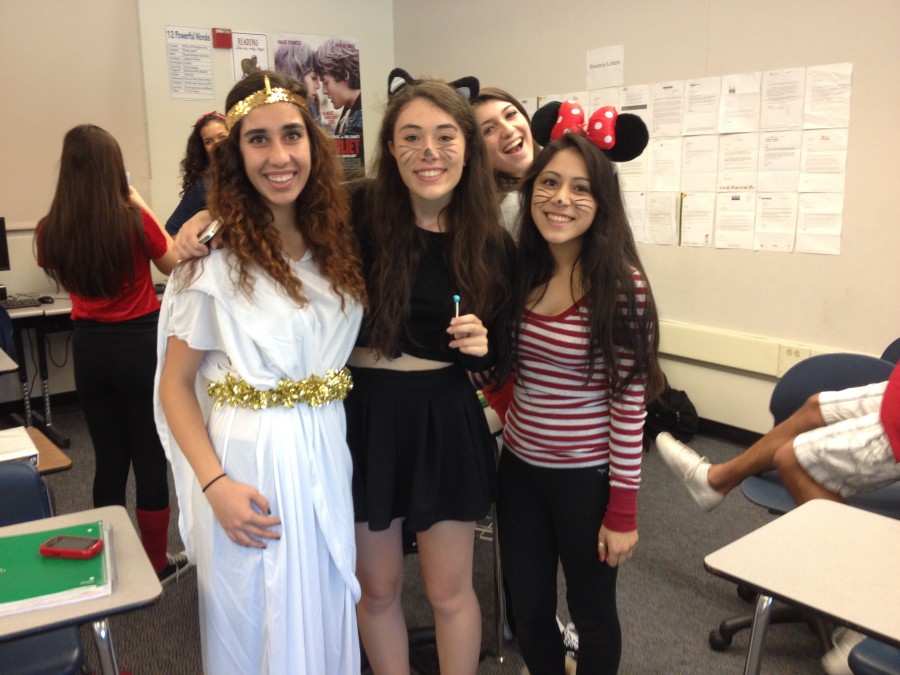 Students dress up in appropriate costumes for school.

Halloween allowed students to show off a little more than their spirit for the holiday.

Many students dressed up for Halloween, but what students wore to school varied greatly from what they wore after hours.

As senior Arian Tabarroj said, “Halloween has been a way to allow people to let their inner sluts out. It’s fun and all, but sometimes people go a little overboard.”

Halloween has allowed anyone to dress up, or dress down, in any way they would like. However, Carlmont still implemented its dress code for the holiday, while adding that students were not to wear masks or bring weapons to school.

Outside of school was a different story. Some students changed their costumes to something that Carlmont’s regulations would not have allowed, such as wearing lingerie.

Not many people really seem to mind the way students decide to dress outside of school. Senior Charlotte Jackman said, “It doesn’t really bother me because they have the choice of what to wear. I mean, whatever makes them feel foxy! I’m not going to stop you unless you’re naked.”

Dressing down, in fact, has not only become accepted but strongly practiced among some of Calrmont’s students. As junior Neeshae Wain said, “All the girls just think Halloween is an opportunity to dress up like sluts. That sounds rude but we all do it.”

The way students decide to dress for Halloween was completely up to them, but may have been controversial among other students.

Kalila Kirk, senior and vice president of the Feminist Club, defended the “revealing” costume choices when she said, “I think that girls should be allowed to dress however they want to on Halloween without being judged. The whole point of the holiday is to dress in eccentric costumes, and this includes revealing ones.”

While many students did decide to wear something revealing on Halloween night, multiple female students took a different route. On campus and off, numerous students, including Kirk, dressed as Rosie the Riveter, an American icon of feminism and women’s economic power.

Whether they dressed as Rosie or threw on some animal ears, the female students of Carlmont made it clear that Halloween is a safe time to dress as they please without being harassed by the usual finger-pointers of society.