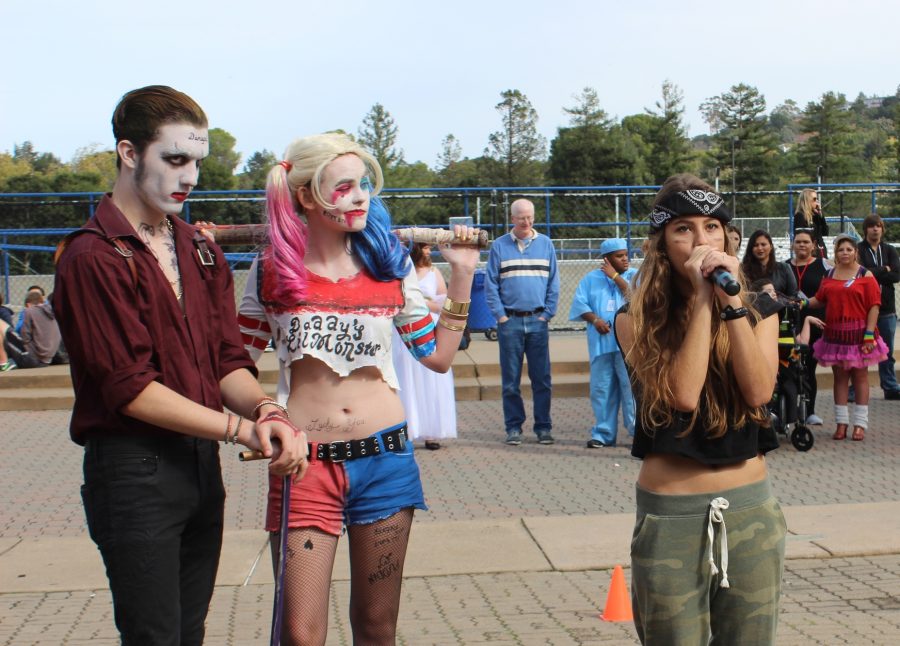 Sophomore Travis Mathers and junior Spencer Stancil, dressed up as the Joker and Harley Quinn of the Suicide Squad, put on their best impersonations in the final round.

It was the ultimate face-off. The contestants had given all they had, but it was down to Dora the Explorer and Suicide Squad.

Here came the final moment — the audience would decide who would be the winner of the Halloween costume contest.

MC Sophie Clark stood in between the contestants, ready to start the final round.

With their cheers, the audience cast their votes. Whoever got the loudest response would be crowned the winner. To the tune of whoops, claps, and hollers, the victory went to… Dora!

“I had no idea about the Halloween parade and contest, and I didn’t expect anyone to know me or cheer for me. I just entered,” said winner Devon Sagon, a junior.

Sagon got the idea to dress up as Dora from a nickname.

“Everyone calls me [Dora] because of my hair, so I had to dress up as her,” said Sagon.

Dora was just one of the many costumes presented at the contest. During lunchtime, students paraded in front of the audience and panel of judges in the Quad. The MC interacted with the contestants, giving them a chance to appeal to the audience. Carlmont Dance kickstarted the event with a rendition of Michael Jackson’s “Thriller,” energizing the crowd.

Many students went beyond just wearing a costume and adopted the persona of their character, becoming the character themselves.

Dora danced carrying her purple felt backpack. Harley was in her element, smirking and casually swinging her baseball bat. The Joker, the other half of the Suicide Squad, was close by, brooding and pensive. “You’re wrong!” Trump exclaimed. A couple dressed up as Taco and Belle, together as Taco “Belle,” held hands and were deemed as “relationship goals” by members of the audience.

“It was fun rooting for Taco “Belle.” [The contestants] were pretty good, they prepared a lot for it and were really into it,” said freshman Larissa McCord.

The parade attracted many students to the Quad as the MC moved from contestant to contestant, each giving reasons on why they should win. The range of costumes and students’ spirit impressed many, including the judges.

“I love the fact that students are still into [Halloween]. The energy, creativity, and effort were really good and that playful spirit is one of the reasons why I’m a teacher,” said judge and Activities Director Jim Kelly. Kelly himself got into the Halloween spirit, dressing up as an ear of corn.

For one day, the school campus was dotted with celebrities, food, and iconic characters. Behind many costumes was a story, whether it be making a political comment by dressing up as Trump or taking a nickname to heart.

Finalists Spencer Stancil and Travis Mathers took inspiration from Suicide Squad, a comic made movie, choosing to be Harley Quinn and the Joker. Though Halloween is only for a single day, it was a magical day for many.

Stancil said, “I really enjoyed being able to show off all the hard work we did for our costumes — they took about a month to make and two hours to put on. It was especially fun to act in character!”