Minority students at Carlmont speak out about cultural appropriation 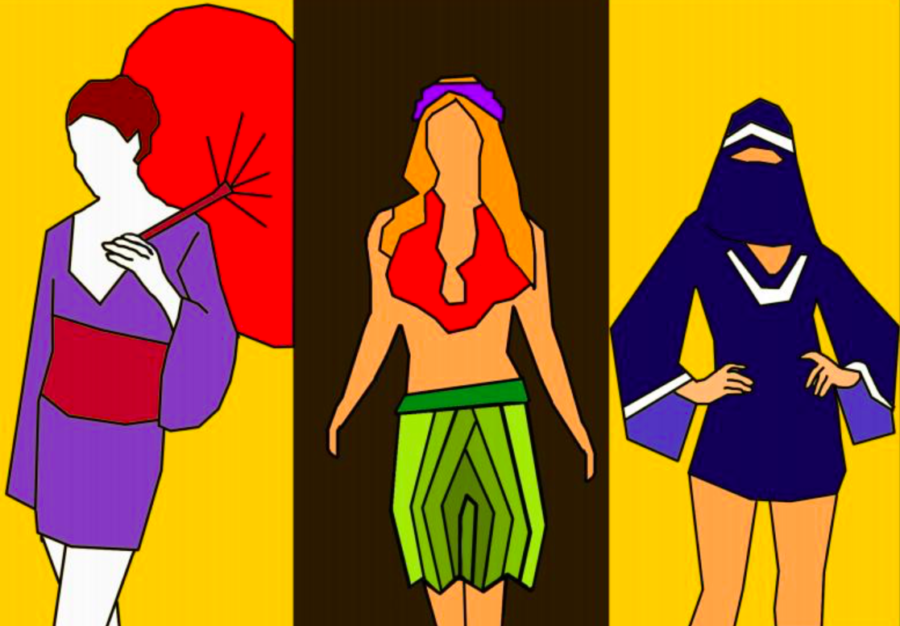 Cultural appropriation is an societal issue that, although always prevalent, is highlighted during Halloween.

Children are skipping down the street, dressed up as skeletons, witches, and ghosts. Bright smiles are disguised by their face paint; jack-o-lantern-shaped baskets are dangling in their hands.

On your way to your friend’s Halloween party, the words “trick or treat” ring in your ears. That’s when you stop and do a double-take.

It’s the same man who does this every year, who gets defensive whenever you bring it up. He’s wearing the traditional headwear that people always think of in relation to your culture, the same clothing that would make you a target if you had it on any other day of the year. But what he has is a cheap rendition, bought off a store online.

It’s something that he can take off, but will always be a part of your identity — despite what he may think, he has never walked a step in your shoes.

This is what it feels like to be a minority during Halloween.

Cultural appropriation is an issue that permeates throughout pop culture and society. It delegitimizes the significance of a culture or cultural artifact and is used to make light of the struggles faced by members of that culture. Although the phrase is often heard in the case of celebrities, it can also be perpetuated by your neighbor down the street.

If you scroll through your social media feed, you might even find photos of people online dressed up as “geishas,” “Arabs” or “Native Americans.” However, these are rarely portrayed by those specific minority groups themselves. Other times, you might see people putting on a fake tan, baggy pants, and an accent, trying to present themselves as a “thug” or a “rapper.”

The term “cultural appropriation” has also been applied to brands. One example is with the backlash surrounding the announcement of a new Día de Los Muertos themed Barbie. The holiday has been celebrated in Latin America for thousands of years, while Barbie is a children’s toy that was, at one point, exclusively marketed as white. But others have praised the addition, describing it as a respectful tribute to the holiday.

In the case of Halloween, stores continue to sell controversial costumes despite alleged cultural insensitivity.

“There are many examples of cultural appropriation in Halloween costumes,” Julia Barbosa, a junior, said. “Indigenous headdresses, Pacific-Islander style clothing, Día de Los Muertos face paint and Latinx-styles ponchos and sombreros, so-called ‘Ghetto’ style —including blackface, large chains, and teeth grills, as well as large, baggy clothing — and even attempts at re-creating the appearance of a movie or TV show character who is part of a minority.”

Barbosa, who is Latinx herself, has seen her culture appropriated in this manner before.

“The appropriation of my culture is common among white society, whether it’s Cinco de Mayo and they feel justified to walk around in sombreros and fake mustaches, or in everyday life, where white girls wear large, Chola-style hoop earrings,” Barbosa said.

Barbosa believes that witnessing the appropriation of one’s culture can harm their relationship with it.

The president of the Black Student Union at Carlmont, senior Janelle Kwofie, also delved into this double standard.

Another well-known controversy is with singer Ariana Grande, who has been accused of cultural appropriation from multiple fronts. The most visible of these accusations stems from her skin tone noticeably darkening over the years and her increasing racial ambiguity. Grande has adopted an image, look, and musical style that many see as a ploy to profit off of black culture.

Accusations of cultural appropriation have also followed politicians, such as current Canadian Prime Minister Justin Trudeau. A photo of him wearing a turban and blackface at an event called “Arabian Nights” has recently resurfaced from 2001. Although he quickly released an apology, it soon became clear from other photos and videos that it was more than just a one-time occurrence. Some shrug it off as an innocent mistake, but the issue with blackface is ingrained in history.

“Blackface dehumanizes the black community. Its origins were literally as entertainment because in the past it was funny for black people to be compared to monkeys and clowns,” Kwofie said. “There is no excuse for it, and it is not necessary for any costume.”

In the past, Kwofie has avoided visiting the quad at Carlmont during Halloween out of fear of cultural appropriation; she has heard previously from friends of students going as black celebrities and characters from popular media, often playing off stereotypes.

“I cannot speak for all minorities but, whenever I see black characters portrayed during Halloween, it’s always through negative stereotypes. People will go as Quavo and start talking about baby mommas and child support, but Quavo has nothing to do with babies or child support. He is a rapper,” Kwofie said. “People will use their costumes as a way to be racist for the day.”

Ignorance towards other cultures often plays a critical role in cultural appropriation.

The president of the Chinese Culture Club, junior Millicent Ku, said, “As Chinese-Americans, we have seen our traditions culturally appropriated. In Utah, a girl wore a Chinese traditional long dress, or qipao, to prom. Although she did not realize it was an aspect of Chinese culture, her level of ignorance did not allow her to feel remorse.”

She was also able to provide details into the root of the issue.

“The issue comes when an ideal or tradition held to great significance by one is made light of by others. This may come in the form of so-called trends,” Ku said. “An example of this can be seen in the clothing one might choose to wear for style, when it’s something minorities have worked tirelessly to preserve.”

The line between what’s cultural appropriation versus cultural appreciation is a contentious one. President of the Japanese Culture Club, junior Kayla Stocker, was able to elaborate on the difference.

“My father is an example of someone who appreciates a culture, rather than appropriating it. My father is white, but my mother is Japanese. When they met, he tried to learn the language and different aspects of the culture. He has a great respect for the Japanese culture, and is therefore not appropriating it,” Stocker said.

She, like Kwofie and Barbosa, had concerns over how influential celebrities like Kim Kardashian portray other cultures.

“I feel the Japanese culture is misrepresented. For example, Kim Kardashian recently came out with a shapewear brand she named ‘Kimono,’ after the Japanese clothing. This was cultural appropriation because she failed to understand the significance of the kimono to Japanese culture,” Stocker said. “It’s a formal type of clothing, often worn at weddings or other important events. It, in no way, should represent shapewear.”

Even though Carlmont is generally regarded as a liberal community, this does not negate its potential for cultural insensitivity.

“We have not seen as extreme cultural appropriation here because we live in such a diverse, privileged area. However, exposure to diversity does not eliminate ignorance,” Ku said. “Please don’t be ignorant on this topic. People need to realize and be aware of the impact they have on others, no matter how big or small.”