Hang up your skates and dreams: Belmont Iceland has reached its end 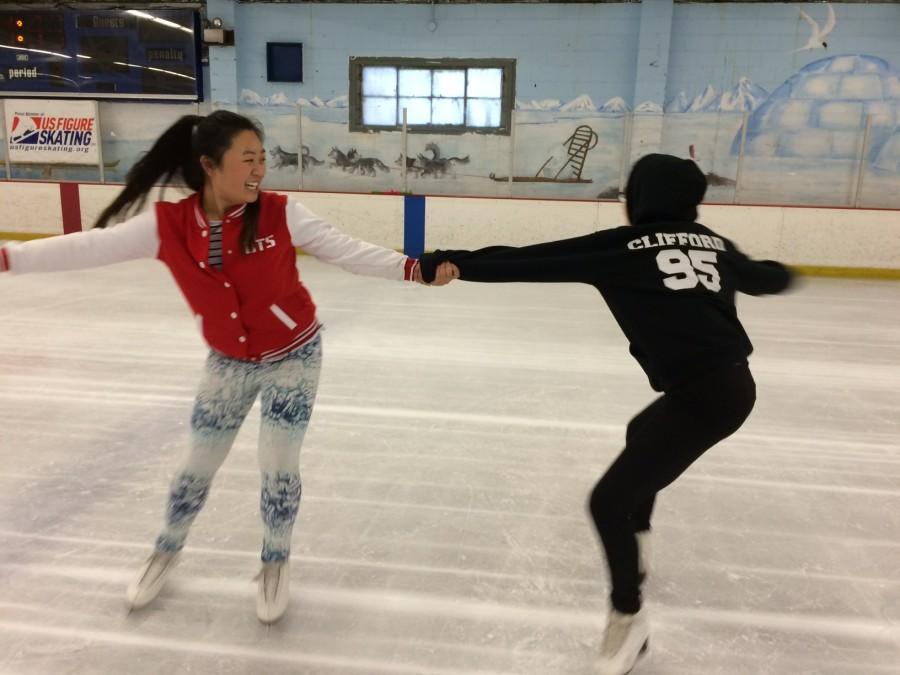 Freestyle 5 skaters and friends Leanne Luu (left) and Raven Myles (right) grip each other's hands and pull into a two-person spin. Myles said, "I grew up here. This place is like a second home to us. We know everyone who works here. I cried too when I found out that it was closing. It's my favorite place, and I've been everywhere, in every corner of the place. My sister, who is in college, is a coach here, and she always has a job for when she comes back on her birthday. She won't be here until after it closes, so she won't be able to come home."

Ice skaters of various ages, from tots to adults, are losing their home. Belmont Iceland has announced that it will be closing its doors by the end of April 2016, leaving many hearts shattered.

With the closure of Belmont Iceland, current skaters and coaches are not the only ones affected. It’s also the skaters of the future who will never have that experience in this town.

I remember when I first truly fell in love with skating. It was the 2014 Sochi Olympics, and I was 13 years old, sitting in front of the TV in my living room. It was the men’s short program, and Yuzuru Hanyu, a 19-year-old skater from Japan, went on to break a record and win the gold medal.

When the first notes of “Parisian Walkways” started, I was floored. It was flair. Power. Beauty. Grace. I was overwhelmed. From that moment forward, I never forgot Yuzuru Hanyu and his skating. It was the crowning of a new prince.

Inspired by the ice legacies, I started skating again with a new fervor.

When I found out that Belmont Iceland was closing after nearly 60 years of business, my stomach dropped.

My stomach dropped even further when I found out that the closure was due to financial issues.

A mere $1 million. The price of a condo in the Bay Area. What most people don’t realize is that what Belmont Iceland has is worth far more than that amount.

The devastating fact is that within the span of three years, we’ve lost two local rinks. The Bridgepointe ice rink in San Mateo closed in 2013, and has been sitting there for nearly three years with its lights off, its ice begging for people, for life.

The city council is now at risk of making a huge mistake; the council is considering a proposal to redevelop the Bridgepointe rink and replace it with retail stores. The rise of the dollar and retail stores selling overpriced leggings at the expense of ice rinks is disparaging. A place harboring so many dreams should not be shut down.

For the past four years that I have been skating, I learned far more than shopping could ever teach me. I learned that crashing into someone else while skating backwards and promptly falling on your butt is okay. For a sport that allows you to fly, spin, and jump, the risks are incomparable.

Belmont Iceland is a place of extraordinary art combined with unlimited spirit, where the sport of power, beauty, and grace reigns.

Soon, that will all be gone.

Celine Yang is a sophomore journalist who enjoys skating on Saturday mornings over sleeping in. She is currently in Freestyle 4 at Belmont Iceland, and anticipates learning the axel in the next few levels. Needless to say, her skating idol is Yuzuru Hanyu.