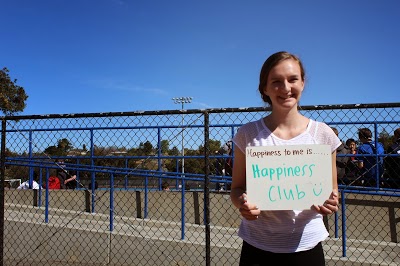 School is a stressful place. Luckily, Happiness Club is in efforts to help alleviate some of that stress by encouraging Carlmont to be a happier campus.

“We got the idea from Northwestern’s Happiness Club. School can be really stressful, so we hoped that promoting happiness on campus could make school just a bit happier,” said Yau, Happiness Club’s vice president.

Happiness Club is quickly making its way around campus. With their simple acts of kindness, these students have created a club that radiates good vibes. This past week, the club held a booth at lunch in collaboration with Carlmont’s Associated Student Body (ASB).

“Basically, people wrote on a whiteboard what happiness means to them and we took a picture to be used in a promotion video for ASB’s upcoming compliments event,” said Yau.

Even though Happiness Club has only been around for less than a year, the club leaders and members have a lot planned and are eager to create more events in efforts to spread smiles around school.

“Since the club has just started this year, we are still trying to figure out logistics and such and haven’t been able to do quite as many events as we would have liked. But I still think that anyone who sees our club becomes a little more happy because of the event we are doing or just our purpose in general,” said Tussy, Happiness Club’s vice president.

Junior Nicco Del Carlo has noticed how fast happiness club is expanding and said, “For being a new club, I think it is neat how it is already well-known around school. The club leaders have done a good job getting the word out.”

Happiness club is open to all students at Carlmont. Meetings are held in room A-11 on the first and last Monday of every month.

Tussy said, “I think that a large portion of the school is aware of the club. We hope to expand our club in the future.”