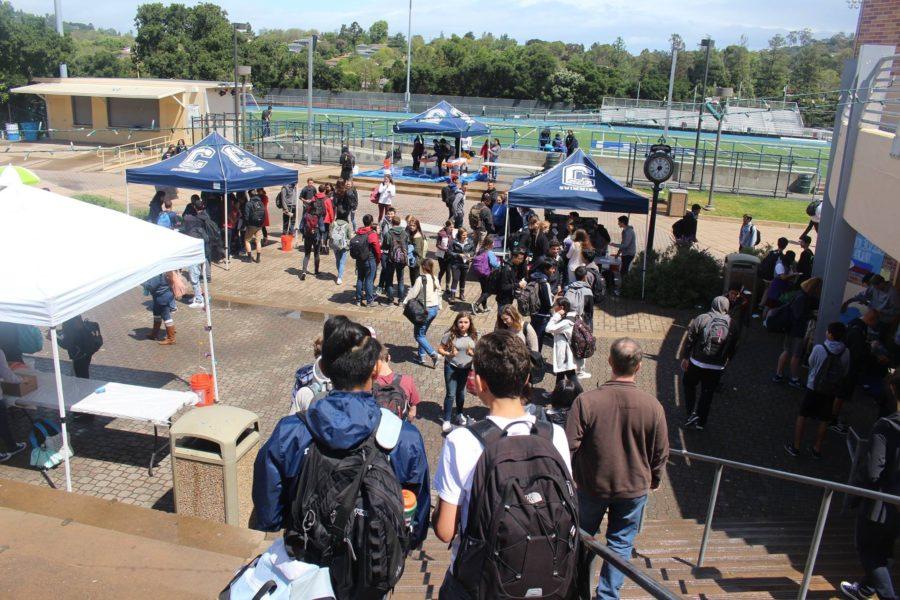 Students gather in the quad during last year's Club Carnival. This year, on Friday April 21, the Health Fair will be replacing thiis event.

Last year, ASB’s Clubs and Culture Commission orchestrated Club Carnival as a way to improve the amount of interaction between the clubs and students. This year, however, will be slightly different.

The Health Fair is the commission’s newest project which is scheduled to take place on Friday, April 21 in the quad during lunch. Around 20 outside organizations have been recruited by the health aide, Sami Gingher, to participate. Gingher has worked vigorously with the commission to plan the upcoming event.

The commission usually works closely with Carlmont’s student-run clubs to plan events and spread the word about their missions and projects. However, this will involve working with outside groups, creating a different experience for the commission.

According to sophomore and Clubs and Culture Commissioner Kaylie Moropoulos, ASB has decided to cancel Club Carnival all together this year.

“We decided to focus on [the Health Fair] instead of Club Carnival because the clubs have had a lot on their plate with electing new officers, registering for next year, and also several recent club fairs. We wanted to give them time to focus on their own events,” said Moropoulos.

The staff at Carlmont also wanted to give the students a chance to learn more about health and professions in that field, which influenced the decision to cancel this year’s Club Carnival altogether.

Sophomore and Clubs and Culture Commissioner Eva Peate said, “The staff believes it’s a chance for students to be more educated and have an opportunity to see possible careers in a medical field and learn more about health in general.”

Although the Health Fair has a different objective and theme than that of the Club Carnival, they have some similar aspects.

Moropoulos said, “Some similarities are that it’s going to be a bunch of different organizations that are sharing different viewpoints and different experiences and opportunities.”

Although Club Carnival is canceled this year, the Health Fair will provide new, rewarding opportunities and is open to clubs who want to be involved.

Junior and Clubs and Culture Supervisor Katie Wong said, “We’ve decided to focus on the Health Fair because it’s a different opportunity for students. Clubs are still welcome to join but we wanted to focus on this event to give the student body a new experience.”