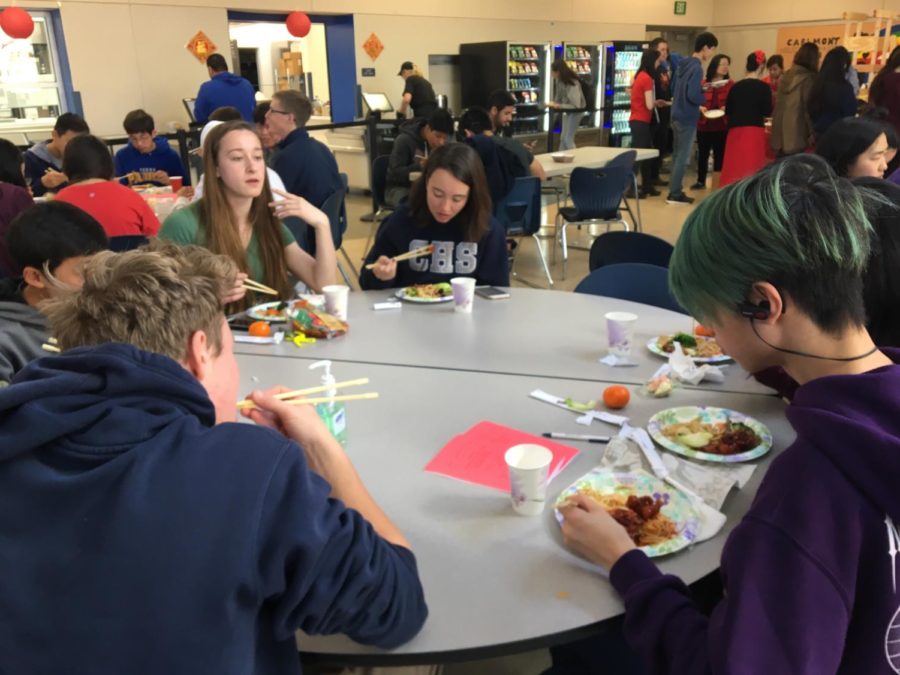 Student who take a Chinese language class celebrate Chinese New Year by learning about the culture and enjoying a meal.

Heritage Fair is an event that celebrates Carlmont’s diversity by showing the students an aspect of the school they don’t usually get to see. To many of those who perform, heritage is more than just family background — it’s a part of who they are.

“Heritage Fair is supposed to let all students appreciate and recognize the cultures at our school,” sophomore and ASB assembly planner Melina Dimick said.

At Carlmont there are over 100 clubs, many of which celebrate ethnicity and bring people of the same culture together.

“They bring a lot of diversity, and it’s so cool to see how in America everyone is part of such a large spectrum of cultures,” sophomore Diane Ji said.

“Swing Club brings a type of energy that I find in some of the other dance groups,” Victoria Vega, a sophomore member of Swing Dance Club, said. “Partner dancing and tricks and fun, bouncy music wakes people up and makes people smile!”

The Heritage Fair assembly brings to light just how many different types of people go to Carlmont, and how they have banded together to share their cultures and heritages.

On the day of the Heritage Fair, a block schedule is implemented so that there is enough time to have the assembly without missing a class or two. The assembly even happens two times because the entire school cannot fit into the gym at the same time.

“It’s just a bit hectic, but it’s cool to see and it’s fun. Sometimes it’s a little hard to tell what is going on because I don’t know too much about various heritages, but I still enjoy it,” Ji said.

The Heritage Fair brings culture, music, expression, and awareness of the diversity at Carlmont with a specialized performance from each one.

“Heritage Fair is my favorite day because it’s so fun and entertaining and it gives students a day to relax and celebrate each other,” Vega said.

This year’s Heritage Fair is on March 1 during third period.