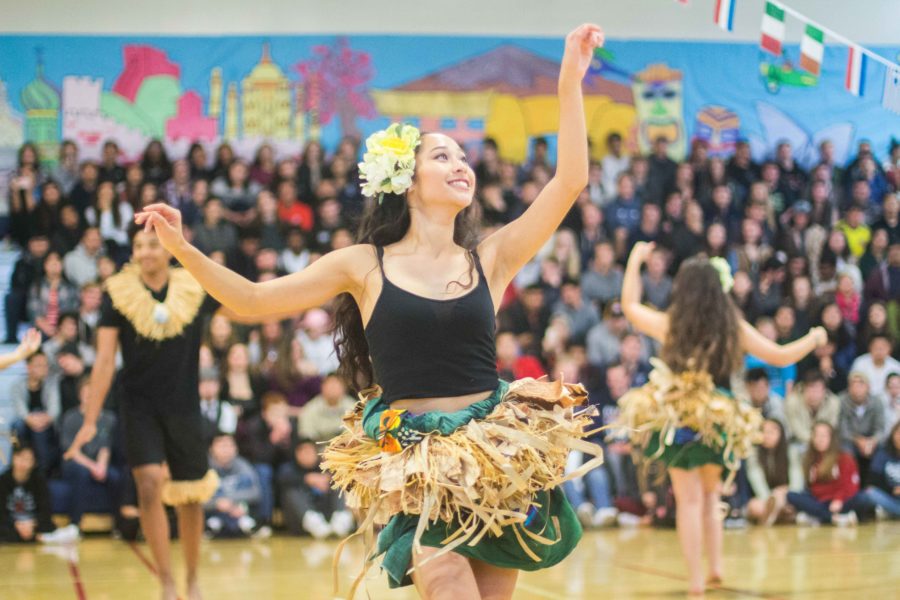 Aloha Club makes a reappearance to perform another traditional Hawaiian dance, in collaboration with Drumline, for the 2017 Heritage Fair assembly finale.

Whoops and cheers filled the gym as hula dancers rhythmically swung their hips to the rat-ti-tat-tats of the beating drums, along with many other performers.

On Feb. 24, the annual Heritage Fair assembly featured many different heritages embodied at Carlmont. The event, held by ASB, showcased various clubs, ranging from Swing Club to Chinese Culture Club, in order to promote diversity and display cultural talents to the student body.

The assembly, paired with the food event in the quad beforehand, takes an immense amount of organization, ensuring that everything is in place.

Performers are often excited that they can share their culture and origins in a unique way to their peers. Clubs practice for weeks together in order to prepare for the diversifying event and hopefully nail their performance.

“I think the second assembly was better because we had already practiced in front of the crowd. The first assembly was a little rough, but for the most part it was good,” said Miguel Manuel Encarnacion, a junior who performed in the acts of Filipino Club, Ukelele Club, and Hip-Hop Club. “I always get nervous, but it’s always a great experience and a fun time.”

Year after year, students cheer on their fellow peers and appreciate the inclusive environment of Heritage Fair, as people can truly express themselves and promote unity.

“I think Heritage Fair is important because it gives every heritage at Carlmont a chance and it’s the one time of the year to show their culture, aside from clubs fair,” said Peschel. “It’s a really awesome opportunity for cultures at Carlmont to show what it means to be a part of their heritage and have traditions.”

Many freshmen also expressed their excitement and enthusiasm for this year’s Heritage Fair, as it was their first.

Freshman Tim Kraemer said, “I really enjoyed my first Heritage Fair since the food was great and I liked the performances. The assembly was very fun and entertaining to learn about these different cultures and what they do.”

Students were impressed with this year’s execution of the event and were left amazed by the different heritage performances that came together.

Encarnacion said, “I really like the message this year because we were able to involve more heritage. In the past, heritage fair wasn’t really focused on heritage too much, but this year it was.”

Overall, Heritage Fair was a success and engaging for many students, as there were also enthusiastic hosts who would perform comedic skits as transitions for performances. The event seemed to have accomplished its goal of educating and entertaining others about different heritages.

“I think it went really well, even though we had some slip-ups with audio and sound and we were always on edge. I think the acts went really smoothly and I enjoyed it a lot,” said Peschel.