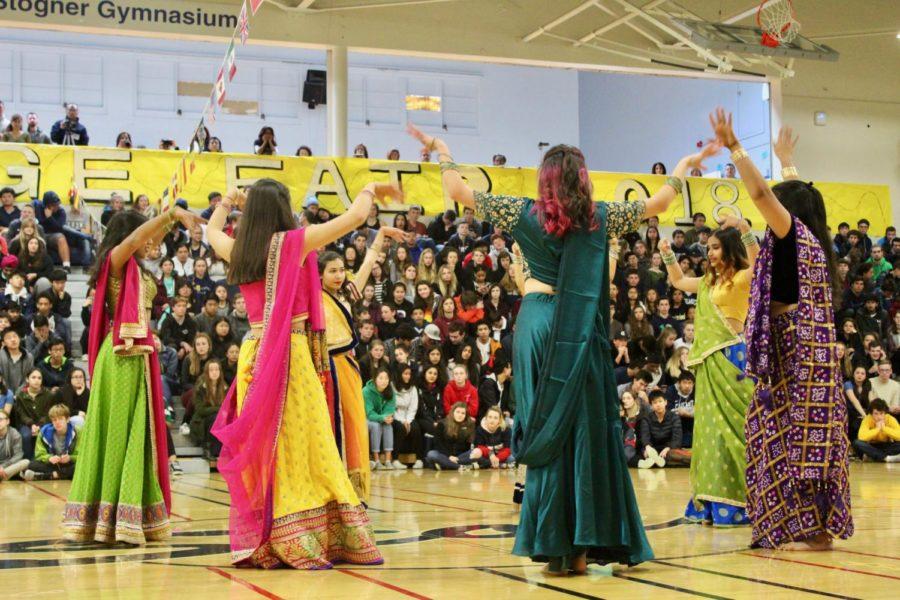 While the rain pounded down outside, students crowded into the gym as the Heritage Fair began, eager to learn about their classmate’s cultures.

The Heritage Fair takes place each year and showcases the many cultures that makeup Carlmont.

The gym was filled with balloons and flags representing many different cultures and heritages that Carlmont consists of. Many of the favorites from the past few years returned, such as Black Student Union (BSU), Hip-Hop Club, and Chinese Culture Club, as well as new groups such as Indian Club and Polynesian Club.

Some groups even had multiple components to their performances, such as Aloha Club, which had two dances, and Polynesian Club, whose dance featured three different parts to showcase their culture. Korean Culture Club used a traditional Korean dance for the first half of their act, then transitioned to a K-Pop dance.

Grace Heck, a junior, said, “I loved seeing my classmates perform and I think it was quite different from last year, which wasn’t what I expected. The dances and singing were pretty unique and it was really fun to watch,”

“I was proud of how it came together, and I think it went well. I had a lot of fun performing and showing my culture to the school because it has been a long time since Indian Club has performed,” Juhi Mehta, a junior, said.

The Heritage Fair takes many months to prepare and plan for, and involves many groups to pull it all together. At the beginning of the preparations, ASB Assembly Commissioners send emails to all of the ethnic and cultural clubs at Carlmont to let them know that it is coming up. After that, the clubs must contact ASB to arrange to perform.

“We started preparing the week before winter break and have been working up until last night,” Melina Dimick, an ASB Assembly Commissioner, said.

Mehta and her club, Indian Club, worked for more than a month to choreograph their dance and put together their outfits.

“One cool part about what we did was that we all got to work with our parents to gather clothes from our culture, and today we wore something called a lengha, which is a traditional type of Indian dress,” Mehta said.

The dances and other displays of culture were accompanied by two emcees, Kyle Dimick and Paul Trembley, who attempted to transition the audience from act to act and perform comedic skits.

“I think the whole premise of the skit was pretty clever because it kind of set a plot for the whole thing and made it much more enjoyable,” said Heck.

Aside from minor technical difficulties, the assembly went off without a hitch, the audience roaring to applause after each act.

“The second assembly went better than the first one, but overall, I think we were pretty prepared. There were a few mistakes, but there isn’t much you can do about that,” Melina Dimick said.

Many students were impressed by the hard work that their peers put into preparing for this event, and all look forward to next year’s assembly.

“They always look so proud of their culture, which everyone should be, and it’s really cool to see a part of them that they usually don’t talk about or express in a conversation,” said Heck.