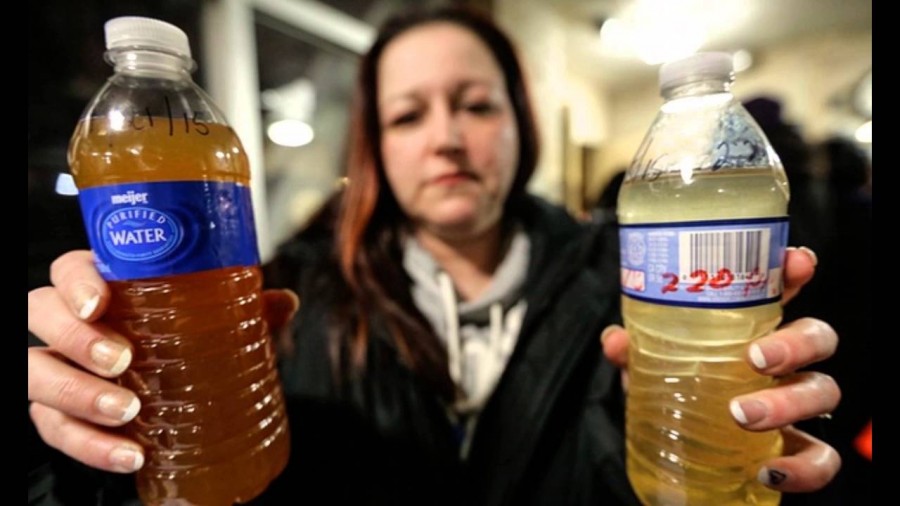 A woman holds up bottles filled with the poisoned water that has been circulating through Flint, Michigan's water pipes.

The water is still undrinkable.

It has been five months since the state of Michigan has switched back to the Great Lakes for Flint’s drinking water source since their temporary use of the Flint River. However, Flint’s inhabitants still cannot drink the water that comes out of their taps at home.

When the struggling industrial town’s water supply was switched to the Flint River during a financial state of emergency, the state failed to treat the highly corrosive water with an anti-corrosive agent, in violation of federal law. This caused the water to corrode the pipes, which then leached lead and heavy metal into the drinking water supply.

“I feel really disappointed that the state  didn’t treat the water because they could have prevented this whole thing from happening. It’s horrible what they’ve done to the town and their reputation,” said sophomore Elizabeth Boman.

According to CNN, even though testing shows that water lead levels have dropped in many Flint homes, there are still hundreds of homes where the water tested well above the EPA’s action level for lead.

Many citizens have come together to help Flint during its water crisis, with donations pouring in for bottled water and water filters to deal with the high levels of lead.

Amaka Agodi, a sophomore in college, studying health promotion and disease prevention studies made an online donation drive for the people affected. According to the Daily Trojan, her GoFundMe was started on March 4, and has continued to grow as it receives small donations from fellow college students.

Resident of Dearborn, Michigan, Diana Hussein, donated the Twitter handle @DietDrPepper, that she created in 2009, in exchange for delivering 41,000 bottles of water to Flint.

“I’m glad there are people who are kind enough to donate, but it’s really sad that a once fully-functioning town has to rely on bottles of water…to wash their hands, clothes, and to bathe. And because they’re not getting an unlimited supply, they’re not getting all the water they need to function normally on a daily basis,” said sophomore Stephanie Blackburn.