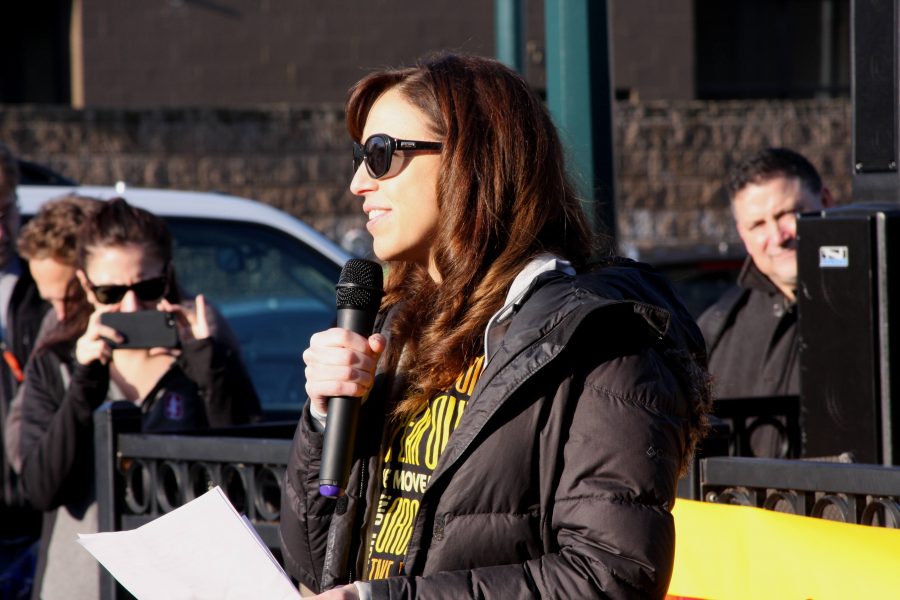 This award recognizes teachers in the community who reflect the ideals of Dr. Martin Luther King Jr. and teach students about justice and diversity.

Ramroth said, “This award was named after Dorothy Boyajian, a teacher who was dedicated to educating her students about social justice. It was designed to honor people who are following in the footsteps of Dr. Martin Luther King Jr. by teaching about nonviolence and community action.”

Due to her active involvement in the community beyond her job requirements, Ramroth was named a recipient of the Dorothy Boyajian Honored Teacher Award.

Ramroth said, “I was nominated for this award due to my work with Sojourn to the Past, encouraging students to vote, getting students to work at the polls, and for bringing students together to have conversations about politics, social justice, racism, and sexism.”

Many students were enthusiastic about Ramroth being given this award.

Fiorella Almada, a senior, said, “It makes me proud and happy to know that [Ramroth] won this award. She is an amazing person and she always makes sure that everyone at Carlmont has the same opportunity for success. She’s one of the best teachers I’ve had because she does everything she can to look out for others.”

Ramroth accepted this award after giving a speech where she discussed the origins of her involvement in social justice work.

In her speech, Ramroth said, “My civil rights journey began when I got involved with the civil rights education program known as Sojourn to the Past as a 16-year-old student, and I have been reaping the personal and professional rewards of that program for the last 16 years. One of those rewards has been the chance to meet Minnijean Brown Trickey, who has made it her mission to eliminate ignorance through education, which is what I try to do in my classroom.”

Due to her hard work and perseverance in her community, many staff members are excited to see that Ramroth was presented with this award.

Carlmont history teacher Jarrod Harrison said, “It’s great to see that teachers are being recognized for their actions that benefit society. [Ramroth] definitely deserves this award because she puts a great amount of effort into everything that she does, including her work outside of school.”

Even after being awarded the Dorothy Boyajian Honored Teacher Award, Ramroth plans on continuing her work in social justice in the future.

“This will be my eighth year working with Sojourn to the Past, I have been actively encouraging people to vote for the past five years, and I plan on continuing to have conversations with students about politics, especially due to the divisions in recent politics,” Ramroth said.

Despite winning an award for her contributions to her community, Ramroth believes that her work goes beyond honoring a single person.

In her acceptance speech, Ramroth said, “It is such an honor to accept [the award], but I am just one of a large group of people, and anything for which I’m being recognized here today could not have been achieved without them. I am continually surrounded by people who inspire me, motivate me, teach me, and push me into new challenges in the work that I am being acknowledged for.”