The definition of a sport is changing 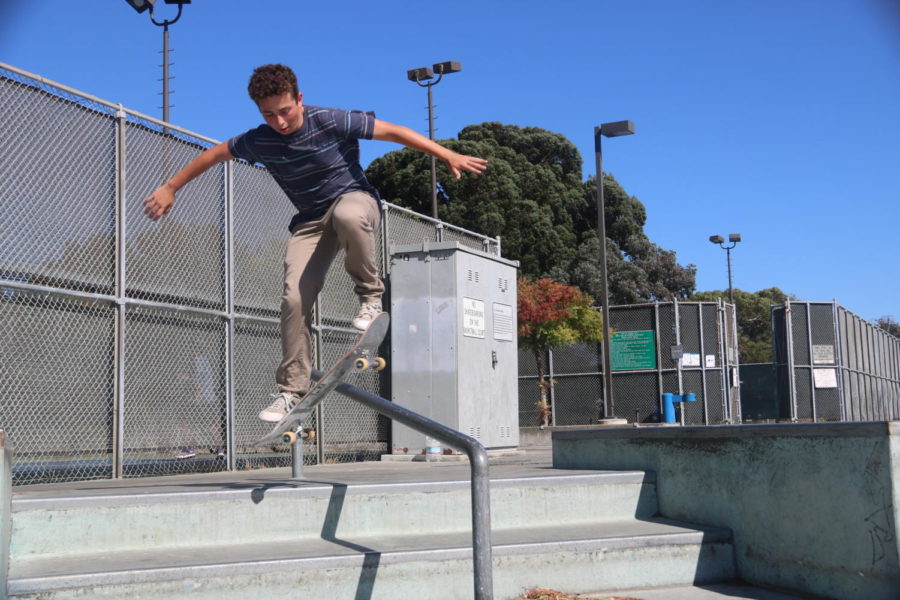 Freshman Joseph Matatyaou does a boardslide on a rail at the Foster City Skatepark. Matatyaou enjoys going to skateparks not only to skate, but also to meet new friends and be part of a community.

The world of sports is being revolutionized.

For the American sports fan, there is now the decision between watching a videogame tournament and a World Series game. For the child growing up, it is no longer a simple choice between soccer or basketball. In both situations, there are often too many sports to choose from.

But what constitutes a sport?

With the growing use of social media providing a constant outlet for opinion, many students find themselves fixed on the argument over whether or not certain activities are sports. Skateboarding is one of these activities.

But for life-long skaters like Joseph Matatyaou, a freshman, skateboarding is less about the competition and more about the passion.

“When I skate, I’m not competing against anybody. You’re not skating to be better than anyone else, you’re skating to better yourself,” Matatyaou said.

Most sports create a rich environment for community. This is also true for skateboarding since skateboarding and activities like it often have tightly-knit communities.

“Skateboarding is great because it makes you new friends. I never would have met the majority of my friends if I didn’t start skating,” Matatyaou said.

However, competition is a key aspect in most sports, and skateboarding’s more relaxed manner has led many to argue the validity of it being a sport. Many critics will use the traditional definition of a sport to refute skateboarding from the conversation.

According to the Oxford Dictionary, a sport is an activity involving physical exertion and skill in which an individual or team competes against another or others for entertainment.

While some might see the traditional definition as a shot to skateboarding, Fletcher Smith, a junior, finds that skateboarding fits the description.

“Depending on the type of skateboarder, you’re definitely going to use physical exertion,” Smith said. “It’s physically draining, but it also takes a lot of skill and practice.”

Skateboarding’s addition to the 2020 Tokyo Olympics backs up the beliefs of both Matatyaou and Smith. Along with skateboarding, surfing and rock climbing will make their Olympic debuts in Tokyo.

These additions mark a new era for the Olympic games, one which leans into the developing culture of sports.

It is clear through their Olympic participation that skateboarding and competitions like it have made a substantial leap forward into global recognition. However, there are still many other activities that fit the description but are not yet accepted by sports culture.

Diane Ji, a senior, is involved in one such activity: competitive jump roping.

“Most of my friends think it’s cool because they’ve seen some of my videos. Some of them still don’t think it’s a sport, though, because it’s not on ESPN,” Ji said.

It can be difficult for athletes that work hard when the world of sports denies the credit they have earned. Ji feels like the Olympics contribute to the problem.

“Including certain sports as Olympic sports just disrespects the other ones,” Ji said.

While some activities such as competitive jump roping are just trying to get their foot in the door, others seem to be reinventing the definition of sports.

Esports is becoming increasingly more popular each year, somewhat due to its prevalence in social media.

In the League of Legends 2018 Worlds Grand Final, there were over 200 million people viewing worldwide. And in 2021, the U.S. esports is projected to have more viewers than every major sports league except the NFL.

Eugene Min, a junior, enjoys watching esports and believes it qualifies as a sport, despite its lack of physicality.

“I think it requires the same mental fortitude as you would in any other sport. And I mean, in addition to that, you still need to practice. It’s a skill that you hone, and it’s just like a sport, where you have to practice to hone that skill in order to compete,” Min said.

Despite the appeals from Min and esports athletes like him, many typical athletes refuse to acknowledge esports’ increasing role in sports culture. According to Min, the denial is understandable.

“I know a lot of basketball players play NBA 2K. There’s a pro NBA 2K league, and those people understand why it’s so fun to watch and play. But if they don’t [play video games], I don’t think they would necessarily see how that’s entertaining,” Min said.

As more and more unusual activities such as skateboarding, competitive jump roping, and esports become prevalent in sports culture, it becomes increasingly important how society identifies them.

Whether or not these new activities are sports is difficult to determine, and it is unlikely that such a subjective line will ever be drawn. However, the world of sports is certainly changing. And for athletes that play atypical activities, it is changing for the better.

“It’s great to see all types of sports in the Olympics,” Smith said. “I think it’s better for the event and it’s almost taking it to a place where it’s really showcasing all the sports in the world.”