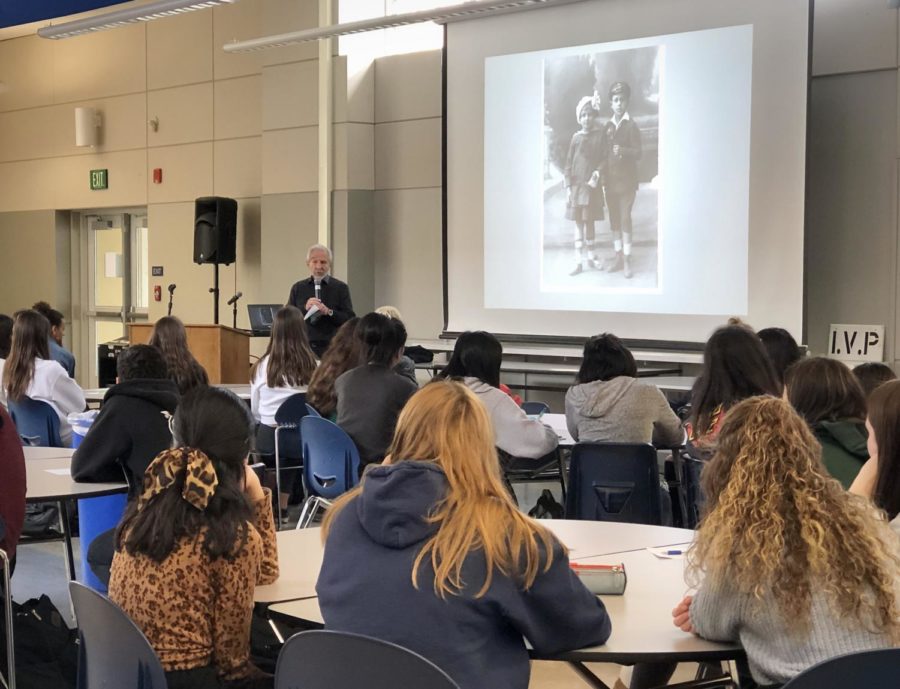 Holocaust survivor George J. Elbaum visited Carlmont on Tuesday, May 14, to share his experiences from both during and after the Holocaust.

Elbaum was 1 year old when Hitler invaded Poland in 1939. Within three years, everyone in his family had died except for him and his mother, living in the Warsaw Ghetto until they escaped in 1942. Throughout the war, Elbaum’s mother placed him to live with a series of Polish Catholic families.

However, Elbaum was not aware that he was Jewish, and would not find out until 1945 when he got into an argument with another boy at school.

“By that time I knew what Jews had gone through during the war and I didn’t want that burden on me,” Elbaum said.

“What my mom taught me was the golden rule: treat others as you would like them to treat you,” Elbaum said.

During Elbaum’s presentation, he read excerpts from his book, “Neither Yesterdays Nor Tomorrows.” The book follows Elbaum’s childhood memories from 1941 to 1955, from living in Warsaw during the war to his time in Paris and America.

Elbaum wrote and finished, “Neither Yesterdays Nor Tomorrows” nine years ago. He kept his memories of the war close and did not share them for 60 years until the documentary “Paper Clips” inspired him to open up.

“I had trouble speaking [about the Holocaust] at first. I still hold some things back, but I know that I choke a lot less now when I speak than when first I started speaking,” Elbaum said.

Though Elbaum said that he has never faced anti-semitism directly, he encourages people to speak out against racism and prejudice today.

“When someone is being prejudiced and attacks someone because of their religion or race, make that person say it louder, make them admit it, and I bet they will back away. As individuals, speak up and speak out,” Elbaum said.

Elbaum often attributed his survival during the war to luck.

When the Nazi soldiers were emptying the Warsaw Ghetto, Elbaum and his grandmother were forced out of their apartment block. Luckily, his mother arrived just in time with the papers that would allow her family to keep living there.

If his mother had arrived a moment later, Elbaum and his grandmother would have been shipped off to a concentration camp.

At another point in time, Elbaum was eating soup in the home of a Polish Catholic family who had taken him in. He had heard a commotion at the front door, and when he turned around, he saw a Nazi soldier with a machine gun staring down at him. Elbaum continued to eat his soup, and the soldier left him alone.

Elbaum later learned that if he had shown any fear, the Nazi soldier would have made him drop his pants (since only Jews were circumcised in Poland at that time) and Elbaum would not have lived to his fifth birthday.

When Elbaum finished his presentation, he opened up the floor to answer questions from the students.

“I talk to high schoolers because they are old enough to understand, yet young enough to have an open mind,” Elbaum said.

Students asked a multitude of questions, varying from how how Elbaum met his wife to how the relationship he has with his story has changed over time.

In the end, Elbaum said that if there were one thing that he wished students would take away from the presentation, it would be to “try not to rely too much on [their] preconceived notions, and keep an open mind when a new situation comes up.”

Many students enjoyed the presentation and considered it an eye-opening experience.

“I found it interesting to hear the story in person. It gave me a deeper understanding of personal values,” said Dylan Roskind, a sophomore.

Other students acknowledged how the presentation helped them to put the horrors of the Holocaust into perspective.

Sophomore Sawyer Kupbens said, “It made everything seem so real, and you could put yourself in his shoes.”