Homecoming assembly raises the bar for the ‘future’ 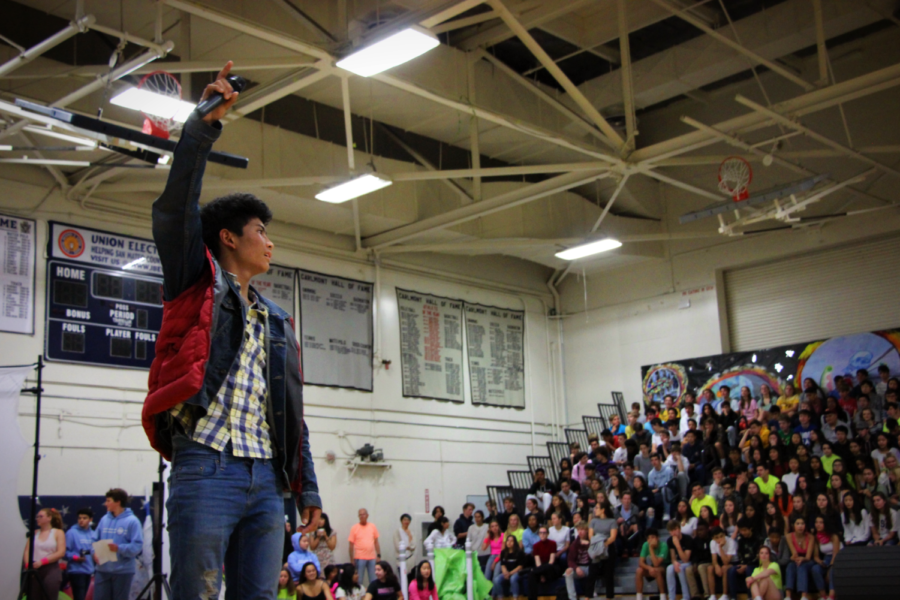 Sophomore Jono Sison energizes the crowd at the beginning of the annual homecoming assembly.

As futuristic decor lined the walls and a sense of Carlmont spirit filled the air, the students crowded onto the bleachers of the Terry Stogner gym for the annual homecoming assembly.

From Carlmont dance to drumline, Carlmont convened at the assembly on Oct. 23 to celebrate student inclusivity and school spirit through an abundance of interactive performances and activities.

This year featured a futuristic theme titled “Back to the Future.” Carlmont’s Associated Student Body (ASB) adorned the gym with painted posters of outer space, alien balloons, and vivid neon colors to compliment the overall theme.

To accompany the assembly, ASB arranged a spirit week where students were encouraged to dress futuristically throughout the week for days such as Neon Day and Decade’s Day.

The assembly commenced with a comedy sketch led by ASB class officers Noah Camerino, Jono Sison, and Joe Sison. In the opening skit, they introduced the homecoming theme. They energized the crowd by emerging from a life-size WALL-E robot figure while recounting every homecoming spirit activity, such as spirit week and Powderpuff.

Following the skit, Carlmont cheerleaders performed a self-choreographed routine to hype up the audience for the rest of the assembly. Cheer also introduced their junior varsity team by dedicating a second routine to acknowledge and spotlight the new cheerleaders.

“After watching the homecoming assembly last year, I immediately knew that I wanted to perform and get involved in the event because everyone’s energy was infectious,” said Katelyn Nightengale, a sophomore and member of junior varsity cheer. “Being able to contribute to such a positive student culture by performing with a team I love has been my favorite part of homecoming week by far.”

Powderpuff and Carlmont football then went head to head in a game of mini-basketball, where members from both teams earned victories and were able to represent their student spirit and school involvement.

After this, the Carlmont Robotics Team was introduced and represented for the first time during a homecoming assembly. The team demonstrated all of the functions of their award-winning robot while enhancing the fact that school spirit comes in various forms at Carlmont and that everyone does have school spirit in their own way.

Soni Kanaya, a senior, said, “I love how this year’s homecoming assembly incorporated such a wide variety of groups and clubs at Carlmont. I think it is extremely important that we as a student body recognize the fact that students do not just need to attend football games or join Screamin’ Scots to demonstrate school spirit, but that anyone can have spirit just by doing what they love at Carlmont.”

The Carlmont Pep Band then performed their rendition of “The Middle” by Zedd and Maren Morris & Grey, which eventually led to a majority of the student body singing along.

“For this year’s homecoming assembly, ASB definitely focused on promoting student inclusivity rather than just spirit alone, which I believe was very evident in the execution of the event,” said Nate Hsich, a sophomore and member of ASB. “Compared to last year’s assembly, homecoming this year felt so much more inclusive and interactive. We got a lot of positive student feedback, as well as participation overall, which is what we aspired for when preparing the event.”

Additionally, ASB decided to immerse the Carlmont staff into the assembly by organizing a game of musical chairs where teachers went head to head for the final chair.

ASB also showed a video encapsulating all of the efforts and events that went into homecoming week this year. The video showcased all of the different groups and people that fabricate Carlmont to enhance ASB’s focus on student inclusivity.

Jacki Awad, a senior and one of the captains for the Carlmont varsity dance team, said, “It felt really good to be represented in this year’s homecoming assembly. Sometimes I feel like certain groups, including Carlmont dance team, fail to get the recognition they deserve, and I am beyond happy with how ASB assured that more groups at Carlmont would be represented in this year’s homecoming assembly.”

Following the video, Carlmont football had the team’s annual senior introductions, but with an unexpected twist. Jake Messina, the Carlmont football coach, concluded the walkout with a meaningful speech surrounding the importance of student inclusivity and representation.

“I just wanted to speak on behalf of the entire Carlmont football program and say that our team plays for you. We play for every student at Carlmont High School,” Messina said. “No student should ever have to feel like they are not worthy of being represented because that is completely false. Everyone deserves to be represented and included in the community. When we play, we represent every student regardless of race, gender, religion, sexual orientation, or anything. We are united.”

After the heartfelt introductions, the new Carlmont varsity dance team performed a high energy hip-hop routine and demonstrated their school spirit through dance.

Carlmont drumline then performed a “Star Wars” themed drum routine, which highlighted each members’ talents with a variety of drum solos and musical renditions.

Sophia Campbell, a junior, said, “My favorite parts of this year’s assembly have to be dance team and Drumline. Their performances were so energetic and got the crowd more involved than I have ever seen before. It is refreshing to see new talented groups emerging at Carlmont and already being recognized at such a large scale.”

Finally, Joe Sison ended the assembly on a motivational and inspirational note by giving a speech to the student body surrounding the definition of student spirit and highlighting the overall purpose of the homecoming assembly.

“The homecoming assembly provides the platform for students to be exposed to different groups and performances,” Joe Sison said. “It is a break from the busy day to day students normally have. The assembly fosters an incredible amount of school spirit and inclusivity, as it is one of the few days we are all together, taking in part something greater than any one individual.”