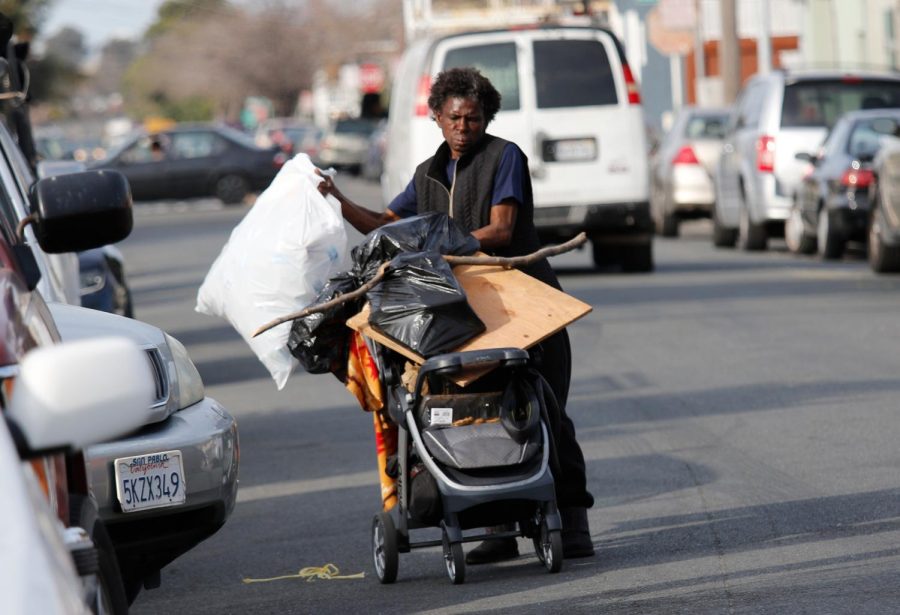 Patty Smith, a homeless man, carries his belongings to another location in Richmond, Calif.

The Bay Area is known to hold a large homeless population; however, with the stricter economic and safety guidelines placed this year, the issue has heightened to a greater degree.

Not only is the Bay Area heavily populated and costly, but it also comes in third as the most homeless-populated place in the United States, according to the Bay Area Council Economic Institute. However, as of June 2020, homeless people in California have been accommodated in hotels by Project Homekey. Homekey is a project implemented by Governor Gavin Newsom to house the homeless during the COVID-19 pandemic and keep the spread to a minimum.

“I think [homelessness is] just a matter of political will and funding,” said Anna Sciaruto, a policy associate at the Bay Area Council in the homelessness committee. “And I think it’s a solvable issue because if you look at other regions [New York], you know they’ve implemented policies that work… It’s an awesome effort, but again, it’s not going to scale to meet the demand of the homeless population in California.”

Pandemic efforts for improving homelessness have housed only 10.7%, approximately 14,200 people of the 151,278 people experiencing homelessness in California so far. Bay Area shelters have recently decreased their shelter capacity by 30% and stopped taking people in due to California’s restrictions regarding the coronavirus. Of the $600 million that Homekey received in grant funds, a portion went to funding hotel and motel units that were left vacant due to the pandemic. Additionally, since California implemented social distancing instructions, shelters have transferred many homeless people into hotels and motels, leaving them unmonitored and isolated.

“We lost a couple [of] people. We heard people at the hotels that came from our shelter went over there because of the mandated-shut down, and unfortunately, they overdosed. And some left the program,” said Mimi Wells, a coordinator and data entry person at the Bay Area Rescue Mission. “It was what they’re doing in those hotels that are not helping the problem. They need to invest that money into getting the shelters open and running sufficiently.”

“Isolating them into hotel rooms, I don’t think was [a] wise idea,” Sewell said about the decision to transfer homeless people to hotel rooms. “My opinion is people are homeless [not] due to lack of housing but lack of community, and when you remove them, you have destroyed them.”

According to Mental Illness Policy Org, 45% of the U.S. homeless population experience mental illnesses that contribute to homelessness alongside being treated differently by people. Sciaruto commented on how the pandemic has brought this and other aspects of homelessness to light.

“I think COVID has shed light on the inequalities that already existed and kind of just broke apart a failed system…if there’s any sort of pandemic or any disaster, you can’t have people obligated like that,” Sciaruto said. “So, I think it just shows that this is not a sustainable solution.”

During the pandemic, California passed two bills to decrease the homeless population’s growth. AB 2533 expands the use of building as emergency shelters, and AB 1851 calls on religious institutions to lower religious-use parking spaces for more affordable housing costs.

“But the kind of question that remains is can this progress scale past COVID-19 because eventually, we will be,” Sciaruto said.