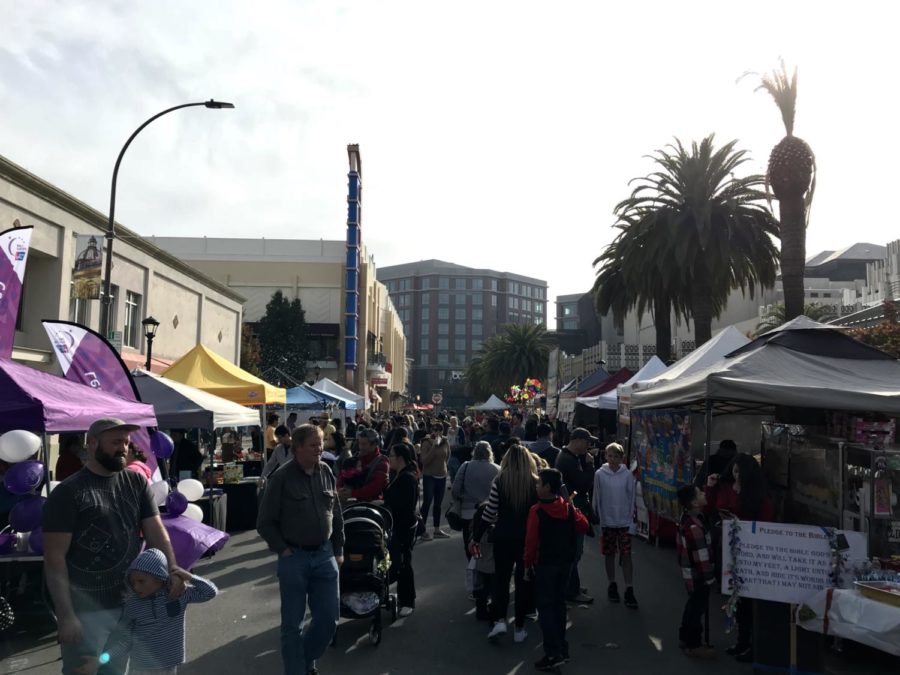 Redwood City's Hometown Days engages many guests with a variety of attractions.

On Dec. 2, Redwood City hosted their annual Hometown Days on and around the courthouse square.

The event, which was set up by the Redwood City Downtown Business Group, featured fake snow, an array of different food trucks, and many performances by several bands, orchestras, dance groups, carolers, and theatrical groups. Several streets around the courthouse square were shut down in order to make room for the attractions.

At the center of the event, on the courthouse square, a large, white tent was set up for people to watch and listen to performances. For some attendees, the performances were the main attraction.

“We usually come here because my son will perform and that’s why we come. That’s also my favorite part to see when we come here,” said local Redwood City resident Janette Sutton.

Apart from the many activities and small shops, food was a prominent part of the celebration. There were taco trucks, sandwiches, candy tasting, and much more. Hundreds of people crowded on Middlefield Road to get in line for food or to buy goods. Although the meals provided were a big part of the celebration, not all of it was fantastic.

Dorabeth Hickernell, a local resident in Redwood City, said, “The food we had wasn’t very good, so I think the sample of candy was the best part.”

The activities at the event allowed people of all ages to have fun. Kids could play with fake snow, while adults could indulge in some listening of music or viewing a variety of other performances. Some families had come just to spend time with their kids.

“I came to Hometown Days because there’s a lot of activities here for my daughter,” Eric Bunzel said.

Overall, Redwood City’s Hometown Days created a lively environment for all the guests. Although it may have blocked some streets in downtown Redwood City, it made up for it by giving back to the guests. Many attendees love the event and have no problem with coming again.

“This isn’t our first time here. We’ve been here three times, and we enjoy it,” Emily Sutton said.