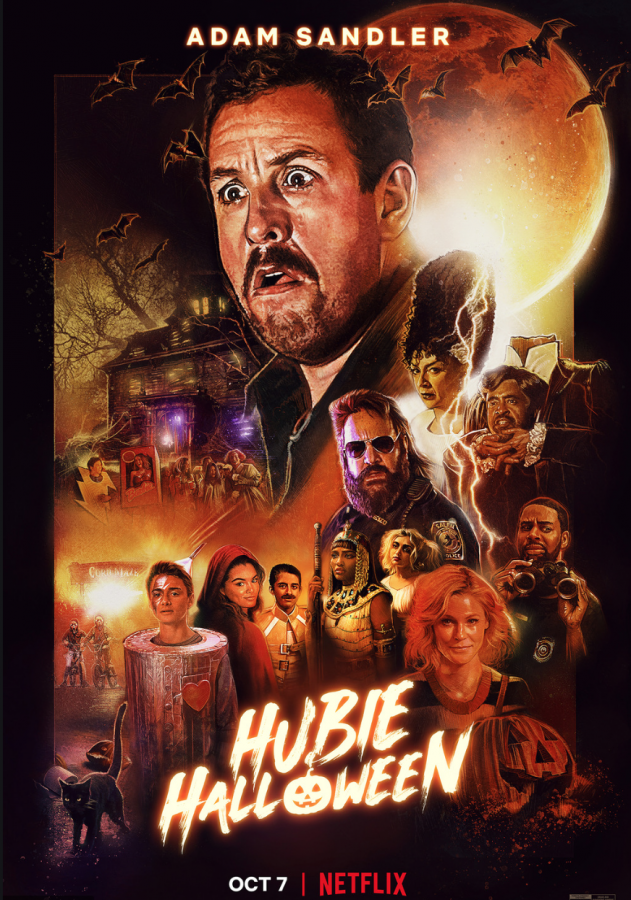 Adam Sandler stars in yet another comedy film for Halloween.

Atypical of the classic, gory Halloween movies, Netflix’s newest release of “Hubie Halloween” takes on a lighthearted twist and a heartwarming story. Yet, the overdone jokes and slow storyline drown out many of the positives.

The movie, rated PG-13, is about a toddler who transforms into a grown man and must learn how to adapt to his new circumstances. The main character, Hubie, played by Adam Sandler, portrays an innocent and pure man who was never able to grow up because of a mental disability.

“It is a hilarious movie with famous actors from Disney Channel and other actors from Saturday Night Live. But there are some sexual jokes and mild swearing. Other than that, it was an awesome movie,” Andy Armstrong, a seventh-grader at Mill Valley Middle School, said.

On the flip side, many of the jokes fell flat for me, and I found some of them just embarrassing. The film relied on dry humor and dirty jokes, but the execution of them was poor and sometimes cringy. I was also not the biggest fan of the storyline. It did not have many layers and was quite one dimensional and boring at times. However, the film did have many of my previous favorite Disney Channel actors, and seeing them all together in a film was amusing and nostalgic.

“The movie is a good comedy and horror mix, and I love watching Adam Sandler; he is one of my favorite actors. There was a plot twist at the end that no one was expecting; it turned out that Hubie’s mother was the kidnapper and her goal was to burn everyone that made fun of Hubie. Throughout the movie, I thought that the two men who escaped from the psych ward were the kidnappers, but it was just a red herring,” Aykhan Aziz, a sixth-grader at Ralston Middle School, said.

I agree with Aziz. I was not expecting an unexpected turn of events in the last few moments of the film. However, I must admit it did frame my opinions on the movie. An innocent and vulnerable woman is not generally the first name on the suspect list!

Overall, I would rate the movie a 6/10. It had an unexpected ending and some laughs, but the repetitive jokes drowned it out. A creative setting would have made the movie more entertaining without becoming uninterested and quitting the film halfway.