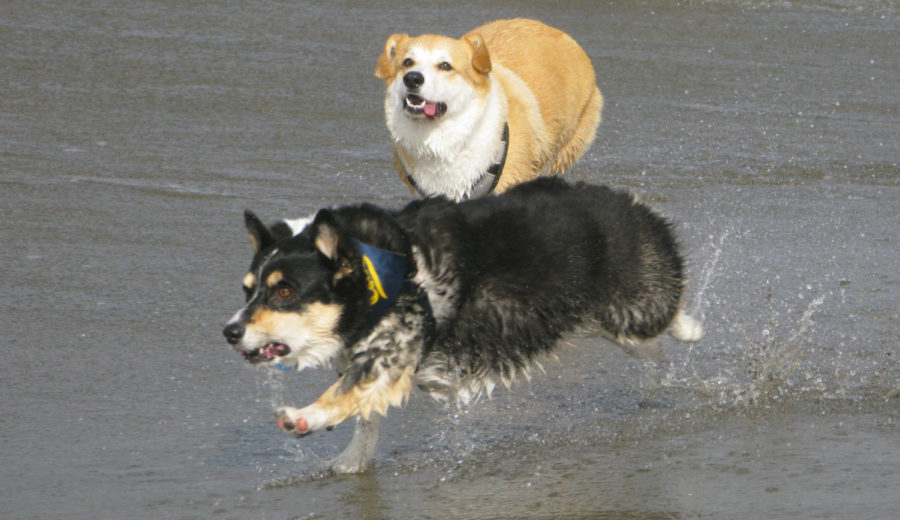 A corgi chases after their new friend as they were splashed by a wave.

At a distance, the crowd at Ocean Beach seemed typical for a Saturday afternoon. There were surfers, Karl the Fog, and sparse parking. But as visitors descended down the steps and hit the sand, they were soon greeted by a chorus of barks as hundreds of stumpy corgis ran back and forth in elaborate costumes.

Corgis in sunglasses, pineapple corgis, even shark corgis all came to frolic and play with fellow pups and their owners at San Francisco’s semi-annual Corgi Con.

Corgi Con has been held twice a year, in the summer and fall, since 2014. In that time, the bi-annual convention has become a cult hit, spawning hundreds of attendees and official merchandise. Aaron Beltran, who was involved in the planning of the event, believes that the growth of the event is due to the power of social media and people’s love for dogs.

“From what it was when it first started, we had only maybe 50 visitors and it was mostly local organizers,” Beltran said. “Now we’re to the point where through the power of social media and the ability for things to go viral, we’ve grown into such a large event. I mean, it’s huge and it’s fun and we love it. We wouldn’t have it any other way.”

For every corgi in a costume, digging a hole, or taking a nap, there are at least two people capturing the moment with their phones and posting it on Instagram or Facebook. This mass sharing on social media has contributed immensely to the popularity and success of Corgi Con and has not only captured the hearts of locals, but dog-lovers from other parts of the U.S. as well.

My first #corgicon2018 with @trixie_the_bunnycorg ? there were so many (100+) corgis and corgi lovers yesterday, best day ever! #corgi #corgilovers #corgibutt

Got recruited to the pirate crew at #corgicon!

Though Gracy McGuigan and her corgi Pixel lived in Seattle and Connecticut, the two have always viewed the event through photos on social media. “We’ve always followed Corgi Con on Instagram and so when we moved to San Francisco, we knew we had to come,” McGuigan said.

For people like Gracy McGuigan who live in the Bay and own a corgi, Corgi Con is one of those events that get brought up in everyday conversations from time to time, but it was only until this year did the pair attend.

“I heard about Corgi Con just from word of mouth,”  Janifer Nguyen said as she watched her rainbow corgi, Cobi chase after another dog. “Every time people see Cobi they always ask me if I have ever gone to Corgi Con.”

By 10 a.m. the beach was already filling up with corgis as they raced each other along the shoreline and played in the sand, with some participating the customary group photo “attempt.”

Though there were plenty of corgis sunbathing in the sand, most turned up their competitive side participating in events such as Corgi Ninja Warrior, corgi costume contest, and a corgi derby.

Crowds gathered to watch Corgi Ninja Warrior, an agility course scaled to corgi-appropriate size. While corgis were originally used for herding, the majority of the furry competitors seemed to have lost their agility, with many thinking that the jumps, tunnels, and weave poles were optional, and chose to run into the audience. But regardless of their skill level, each corgi and their owner were greeted by a chorus of cheers.

Though each pup gave it their all, it was summer’s champion, Ketchup, who took the reigning corgi ninja title.

But not all of the day’s activities required agility, for corgis like Button, the costume contest was the perfect fit.

Kelli Kohlereck and her corgi, Button, have competed in the costume contest for the past three years. As a seamstress, Kohlereck always sews something new for the pair, and this year, the duo dressed up as Cinderella and her fairy godmother.

“Since I sew so much and I have her [Button’s] measurements memorized, I can just draw something and know that it will fit her,” Kohlereck said. “It only took me four hours to make both ours because I already had the skirt.”

Though they didn’t win the contest, Kohlereck said that she enjoys dressing Button up and seeing people’s faces light up.

For those involved in the event, like Beltran, it is that happiness that corgis bring that make Corgi Con such an amazing event.

“I think with everything that’s going on in the world, you need to find some sense of happiness, and for a lot of people that comes from dogs. Especially corgis, they always bring a smile to someone’s face and I mean just look at that,” Beltran said while gesturing towards a corgi dressed up as a loaf of Wonder Bread. “You can’t be mad at that.”