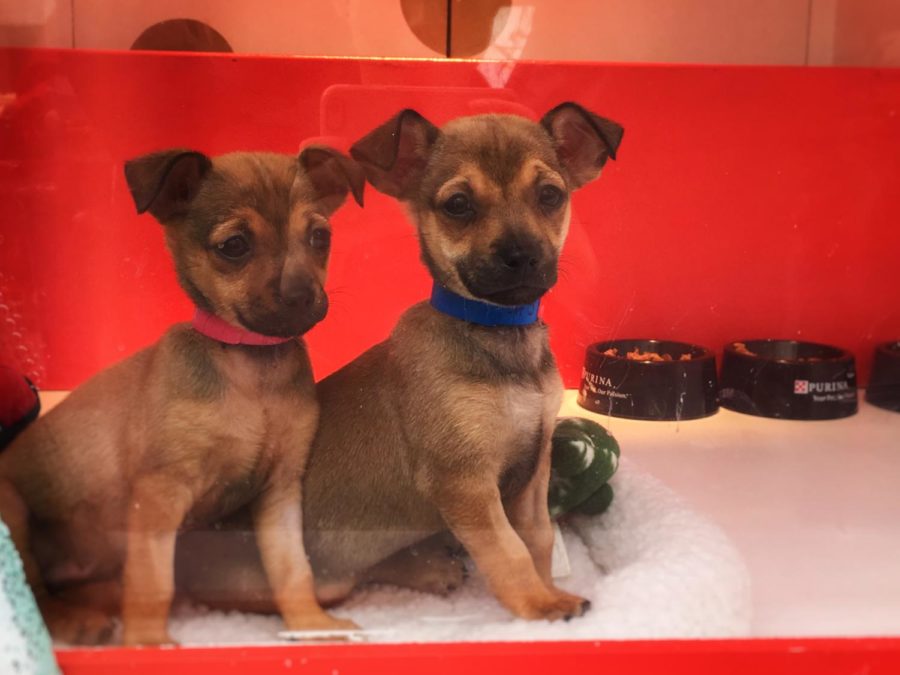 With the holiday spirit finally arriving in San Francisco, so have hundreds of kittens and puppies wishing for a family of their own this holiday season.

For over 30 years, the San Francisco Society for the Prevention of Cruelty to Animals has partnered with Macy’s to show off its adoptable pets in hopes that passersby may bring a new addition, or multiple additions, to their family.

With holiday-themed names like “Yams,” “Potato,” and “Turkey,” more than 65 animals have already found new homes.

Over the last 30 years of partnering with Macy’s, more than 8,800 animals have been adopted. Each year, hundreds of volunteers come together to help out; according to the SPCA, 772 volunteers contributed more than 4,400 hours in 2016 and helped them raise almost $100,000 in donations.

Standing in front of the puppy-filled windows of Macy’s, volunteer Maddy Hogan holds a red donation box for the SPCA.

“It’s awesome,” Hogan said. “We love helping out, and it’s definitely an important part of the holiday spirit.”

Smiling as she watches a group of children gush over two sleeping puppies behind the glass, volunteer Breena Isaacson also loves the Holiday Window environment.

“This is my first time volunteering,” Isaacson said. “Every year, I come down and see the animals, but this year I finally have a chance to come down here and be a part of it.”

The Holiday Windows will last up until Jan. 1 and will continue to be open for volunteers, adoptions, and donations. Even for those who can’t make it to the city, anyone can take a live, virtual peek at the kittens and puppies on display by downloading the free Petcube App and following the SFSPCA.

For those who want to see even more cuteness, the kittens will also be on display and available for the “Cuddle Experience,” located on the sixth floor of Macy’s, where for a donation fee of $10, visitors can play with adorable kittens for ten minutes at a time.

According to Scott H., a volunteer on the sixth floor, the event is not only enjoyable but can easily make a difference in the lives of many animals.

“It’s really fun and easy to get people to come because all you have to do is ask ‘Do you like kittens?’ and almost no one can say no once they see those guys,” said Scott.

This year’s windows are called “The Perfect Gift Brings People Together” and for many visitors, bringing a pet into someone’s life can sometimes be the greatest gift of all.

Kristen A. is one of the many visitors who won’t walk out of the department store empty-handed.

“We usually come at least once a year, but this year will be the first time we will be adopting,” she said. “There’s a lot of kittens that need a new home and [adopting a kitten] will be a Christmas surprise for my husband.”